Der Prinz von Homburg is a 1960 opera by Hans Werner Henze setting a libretto by Ingeborg Bachmann based on an 1811 play by Heinrich von Kleist.  The essential context is Henze and Bachmann’s rejection of German militarism and authoritarianism that they believed was being built back into the new German Federal Republic.  It has been enjoying something of a revival in the last few years, perhaps as a result of the resurgence of the Fascist/nationalist right, with multiple productions in Germany including one in Stuttgart in 2019 which was recorded for video.

END_OF_DOCUMENT_TOKEN_TO_BE_REPLACED

John Adams’ 2005 opera Doctor Atomic, about the development of the first atomic weapon, comes over very effectively on CD. I think this is because, in essence, it’s more oratorio than opera. There’s very little action in the stage version. So little in fact that Peter Sellars staged the original production rather the way he stages oratorios with lots of stylized movement by the chorus and the introduction of dancers. There are definite advantages to having the music without the distraction of the visuals.

END_OF_DOCUMENT_TOKEN_TO_BE_REPLACED

Lisa Hirsch asked on Twitter the other day for suggestions for the five most important operas written since 1965 (i.e. in the last fifty years).  It’s a really interesting question and I pinged off a quick, semi-considered response.  Thinking about it some more I think I would stick with my choices.  (Obviously I haven’t seen every eligible opera but it surprises me a bit how many I have seen live or on DVD).  So here are my picks:

END_OF_DOCUMENT_TOKEN_TO_BE_REPLACED 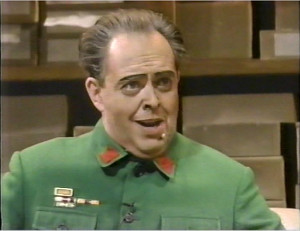 I found it a bit shocking that John Adam’s Nixon in China wasn’t released on DVD until after the MetHD broadcast in 2011.  I was even more shocked when I found out that the original 1987 Houston production had been recorded and broadcast on PBS.  Just recently, thanks to a kind reader of this blog, I’ve been able to watch that original broadcast.  It’s TV from 1988 recorded on VHS and then digitized so the picture quality isn’t state of the art but the sound is surprisingly good. END_OF_DOCUMENT_TOKEN_TO_BE_REPLACED

John Adams’ El Niño was conceived as an oratorio but thoughts turned to it being staged early in the creative process.  The final result, as staged at Paris’ Châtelet in 2000, defies easy characterization.  There are singers and dancers on stage but they don’t represent unique characters.  So, for example, at one moment Willard White is Herod and at another Joseph.  To further complicate matters video is constantly projected onto a screen above the stage space.  It was specially created for the piece being shot on location in Super 8.  There’s no clear narrative either.  To some extent it tells the Christmas story but it’s at least as much about the feminine experience of giving birth as anything from Isiah or the Gospels.  It also uses a very eclectic mix of texts; from the Bible, from the Apocrypha, from female Latin American poets, from Hildegard of Bingen and so on.  There are lots off Sellars’ trademarks in the staging too; semaphore and so on.  Does it work?  I don’t really know as it’s really hard to tell from the video recording (see para 3).

END_OF_DOCUMENT_TOKEN_TO_BE_REPLACED

Making a film of an opera rather than filming an opera involves interesting choices and one of the strengths of the DVD of Penny Woolcock’s film of John Adams’ and Alice Goodman’s The Death of Klinghoffer is that includes 47 minutes of Woolcock, Adams and others discussing just how one takes a rather abstractly staged opera (the original staging was, inevitably, by Peter Sellars) and turn it into an essentially naturalistic film.  Of course, naturalism will only go so far with opera but this goes a long way in that direction.  The soloists are filmed mainly on location and they sing to the camera.  The choruses, mainly backed by documentary footage, and the orchestra were recorded in the studio but the actors sing ‘live’.  The one concession to “being operatic” is having a mezzo voice one of the Palestinians though he is played by a male actor. 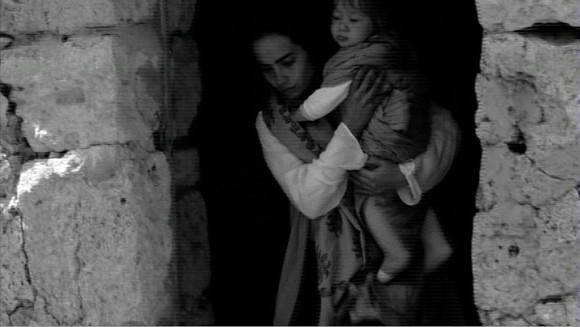 END_OF_DOCUMENT_TOKEN_TO_BE_REPLACED

Works for two pianos are comparatively rare and the chance to hear two contemporary works for them rarer still.  Today, in the Richard Bradshaw Amphitheatre we got to do just that.  The program consisted of John Adams’ 1996 Hallelujah Junction, which i have heard a few times before, and Hans Thomalla’s 2004 piece Noema.  Both composers were there to introduce there works. END_OF_DOCUMENT_TOKEN_TO_BE_REPLACED 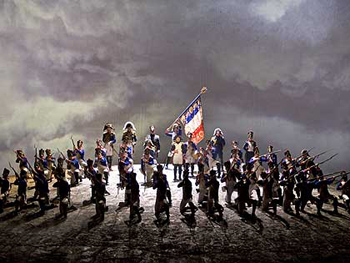 As November 11th comes around for the 94th time since the guns were, very temporarily, silenced I thought it might be interesting to look at how war has been seen by librettists and composers over the years. Very early on we get a very gritty take on the subject in Monteverdi’s extremely compact Il combattimento di Tancredi e Clorinda but not so long after the path for the next three centuries is set with Purcell’s broadly comic King Arthur.  As far as I can see from Purcell to 1945, with very minor exceptions, the message is largely “war is fun”.  War is an excuse for a big parade (Aida; unless Tim Albery is directing!), an excuse for a drinking song (Faust), just plain comedic (La Fille du Regiment), a plot device (Cosí fan tutte) or a background event (Tosca, various versions of the Armida story).  The only opera, pre 1945, that I can think of that deals with the horror of war is Les Troyens, and that of course takes place in a distant, mythical, past.

END_OF_DOCUMENT_TOKEN_TO_BE_REPLACED

Nixon in China at the COC

There are an awful lot of opera DVDs about.  It sometimes seems like there’s a new Tosca or Traviata out every week, often for no apparent reason.  It’s perhaps surprising then that some works don’t make it to DVD.  One particularly egregious case would seem to be John Adams’ Nixon in China.  It’s a good piece and has had plenty of productions both in North America and elsewhere.  A couple of years ago I saw it twice in 24 hours; on a Friday evening at COC followed by the HD broadcast from the Met the following afternoon and I’ve been listening to an audio recording of the COC version on my walk to and from work.  But there’s no DVD!  I guess that the Met probably planned to release the HD recording but James Maddalena, the Nixon in the recording, was so obviously ill I was actually surprised that he continued after the interval and I guess that scuppered that. END_OF_DOCUMENT_TOKEN_TO_BE_REPLACED

I believe in new opera. I think it’s vital to the survival of the genre and I like quite a lot of it. Most of what I like has come from European or British composers or John Adams. I love Reimann’s Lear and Birtwistle’s The Minotaur and Sariaaho’s L’Amour de Loin.  I’m equally impressed by Nixon in China and, maybe to a lesser extent, Doctor Atomic.  All of these, it seems to me, lie within the range of idiom of contemporary symphonic or chamber music.  I’ve had much less luck finding contemporary American opera, Adams aside, that I enjoy or even find interesting.  I loathed A Streetcar Named Desire and five minutes of Adamo’s Little Women had me reaching for the barf bucket.  It’s a combination of cloying sentimentality and music that sounds like South Pacific minus the good tunes.  It’s certainly not the sort of music one could imagine hearing at a symphony concert. Am I missing something?  What should I try to see if I want to see intelligent, musically interesting contemporary American opera?