The last time I reviewed a recording of Monteverdi’s L’Orfeo was ten years ago and it included Jordi Savali with La Capella Real de Catalunya and Le Concert des Nations.  Oddly enough they also figure in a recording made last year at the Opéra Comique in Paris.  Pauline Bayle’s production though is very different from the very HIP Liceu version. 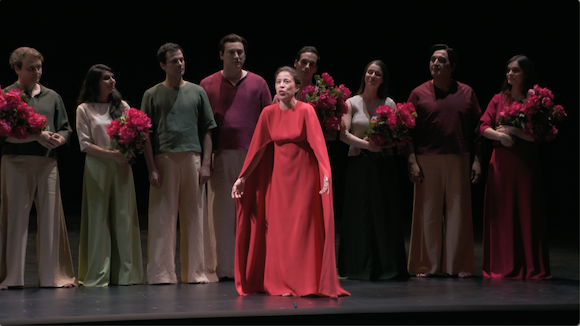 END_OF_DOCUMENT_TOKEN_TO_BE_REPLACED

Rimsky-Korsakov’s The Golden Cockerel is a pretty weird opera.  It’s a satire on Nicholas II’s performance as tsar written just after the disastrous 1905 war with Japan and due to entirely unsurprising trouble with the censors it wasn’t performed in the composer’s life time.  As you may imagine, a production of it by Barrie Kosky doesn’t make it any less weird.  Kosky’s production was recorded at Opéra de Lyon in May 2021 and there are still some COVID artefacts.  The chorus, for instance, is masked.  But mostly it feels like a “normal” production.

END_OF_DOCUMENT_TOKEN_TO_BE_REPLACED

Bizet’s Carmen premiered at the Opéra Comique in Paris in 1875.  In 2009 it was revived there in a production by Adrian Noble.  That production was filmed for TV and has now been released on disk.  Having watched it I’m asking myself whether it’s an attempt in some way to “recreate” something similar to the 1875 experience.  Alas, there’s nothing in the documentation to help with this question either way but two things intrigued me. The Orchestre Révolutionnaire et Romantique is in the pit which suggests an attempt to get a “period sound”.  Secondly, the spoken dialogue is not the version I’m accustomed to and there’s quite a bit more of it.  Is this, perhaps, the original 1875 dialogue? 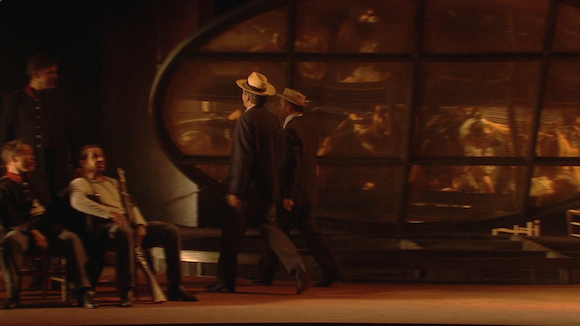 END_OF_DOCUMENT_TOKEN_TO_BE_REPLACED

Laurent Pelly’s 2017 production of Rossini’s Il barbiere di Siviglia for the Théatre des Champs Élysée  is classic Pelly.  The sets and costumes are very simple and essentially monochrome.  The sets in fact are constructed from flats painted as music paper.  The black, white and grey costumes are more or less modern and pretty nondescript.  But, in the classic Pelly manner, the action is fast paced and convincing.  There’s lots of synchronised movement and the physical acting and facial expressions are a bit exaggerated.  I toyed with the word “cartoonish” but that’s a bit crude if not entirely inaccurate.  The overall effect is positive.

END_OF_DOCUMENT_TOKEN_TO_BE_REPLACED

Agrippina is definitely one of the most interesting of Handel’s early operas. It has very good and very varied music including a ravishing love duet in Act 3 which reminds one of Monteverdi; perhaps not surprisingly since Poppea is one of the characters singing it! The libretto, too, has something of L’incoronazione about it. It’s smart, sexy and utterly cynical which I suppose is about par for an 18th century cardinal. It’s said that Grimani based the character of Claudio, here portrayed as an oversexed buffoon (oace Robert Graves), on his arch enemy Clemens XI. s a bonus in Robert Carsen’s version there’s a rather shocking ending in which Nerone, literally, gets the last laugh.

END_OF_DOCUMENT_TOKEN_TO_BE_REPLACED

Cavalli’s Ercole Amante is an oddity.  It was intended as a wedding present from Cardinal Mazarin to Louis XIV but got hijacked by Lully who inserted a bunch of ballets for the king to dance stretching out the piece to something like six hours.  It wasn’t a great success.  It’s also a very odd story for a piece intended for a royal patron as I explained in reviewing an earlier recording.  It’s also in Italian which may make the only French court work to be performed in that language. END_OF_DOCUMENT_TOKEN_TO_BE_REPLACED

I guess there are two ways one can approach “Gothic Horror”.  Either one takes its conventions at face value as in, say, Bram Stoker’s Dracula or one treats it tongue in cheek; Jane Austen’s Northanger Abbey of the BBC Dracula from earlier this year.  It’s no surprise that in La nonne sanglante Gounod very much takes things at face value and, equally unsurprisingly chucks in a fair amount of Catholic religiosity complete with the unlikeliest characters wandering off to Heaven at the end.

END_OF_DOCUMENT_TOKEN_TO_BE_REPLACED

Melly Still’s production of Dvorák’s Rusalka, recorded at Glyndebourne in 2019 got rave reviews and, judging by the audience reaction on the recording. was enthusiastically received in the house.  Unfortunately I don’t think it works all that well on video despite some rather stunning stage pictures and generally strong performances. 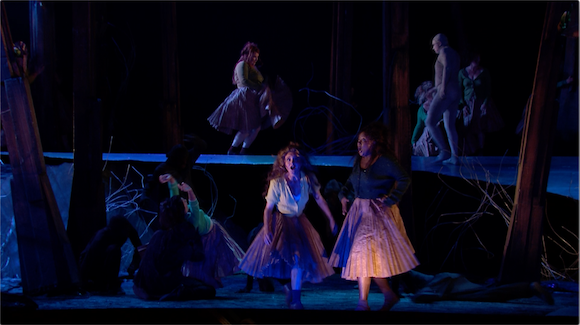 END_OF_DOCUMENT_TOKEN_TO_BE_REPLACED

The libretto of Massenet’s Cendrillon is much more ambiguous than Rossini’s straightforward La Cenerentola and given that we all “know” the Cinderella story exploiting those ambiguities is likely to prove attractive to a director.  Fiona Shaw, whose Glyndebourne production was revived in 2019 under the revival direction of Fiona Dunn, finds rather more than. most.

END_OF_DOCUMENT_TOKEN_TO_BE_REPLACED

Canadian design/direction team Barbe & Doucet were engaged to create a new production of Mozart’s Die Zauberflöte at Glyndebourne in 2019. As they explain in the introductory feature The Making of the Magic, they had refused for 20 years to tackle this work because of what they saw as its inherent racism and sexism. Part of the interest therefore in watching this recording is to see whether and how they deal with those two issues. 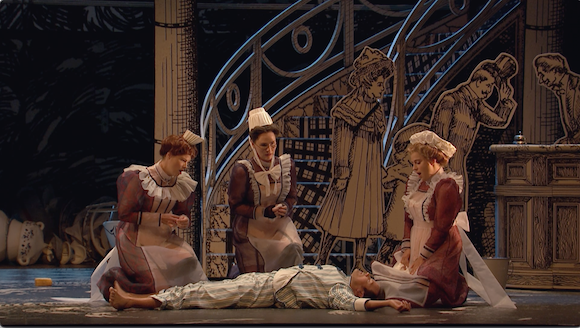