Agrippina is definitely one of the most interesting of Handel’s early operas. It has very good and very varied music including a ravishing love duet in Act 3 which reminds one of Monteverdi; perhaps not surprisingly since Poppea is one of the characters singing it! The libretto, too, has something of L’incoronazione about it. It’s smart, sexy and utterly cynical which I suppose is about par for an 18th century cardinal. It’s said that Grimani based the character of Claudio, here portrayed as an oversexed buffoon (oace Robert Graves), on his arch enemy Clemens XI. s a bonus in Robert Carsen’s version there’s a rather shocking ending in which Nerone, literally, gets the last laugh. 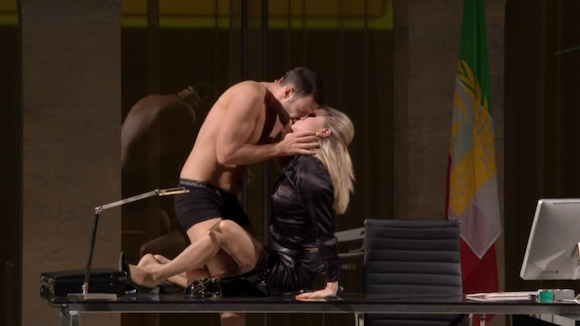 The setting for this production, filmed at Theater an der Wien in 2016, is a sort of ultra modern Fascist Italy. Claudio’s office is all expensive office furniture, computers and flat screens. Here Agrippina holds court while Claudio is off conquering Britain with aides rearranging her desk and bringing documents for her signature, It’s on this desk too that she has her way with her sidekicks Pallante and Narciso in a scene where the two men go through an identical set of movements in pursuit of Agrippina revealing their identical underpants.

The air of decadence and luxury is perpetuated in Act 2; much of which takes place in an expensive spa where Claudio is surrounded by babes in bikinis while Pallante puts a cohort of scantily clad studs through their paces for Agrippina’s amusement. And, of course, there’s Poppea; a little tease who is stringing along Claudio, Nerone and Ottone despite having apparently been bribed to side with Agrippina with a lot of expensive designer shopping. There’s quite a funny scene where Nerone and Ottone, unbeknownst to the other are in Poppea’s quarters when Claudio arrives and there’s that familiar opera scene of multiple characters moving their hiding places apparently unaware of the others. There are also sinister looking bodyguards, a goose-stepping Claudio and other trappings of a military that looks for for show rather than anything else.

So it’s a pretty good, and fairly typical, example of Carsen’s approach to comedy but what makes i are the performances. Patricia Bardon is a fantastic Agrippina. She sings her numbers well but it’s the sense she exudes of having everybody on a string that is so effective. Mika Kares is an ideal foil as Claudio. He’s a big man with a booming bass that seems just right for this bombastic figure. Poppea is Danielle de Niese (who else?) and while I don’t think she’s the greatest Handel soprano on the planet she does sexpot like nobody else.There’s nice work too from the diminutive counter-temor Filippo Mineccia as Ottone and the reliable Jake Arditti as Nerone. The rather studly counter-tenor Tom Verney as Narciso is well matched by the equally buff bass-baritone Damien Pass as Pallante. The ensemble is completed by bass Christopher Seidl as the weaselly Lesbo. It’s a very strong ensemble and I think Theater an der Wien have done a great job assembling a cast who can all sing Handel, including three first rate counter-tenors. 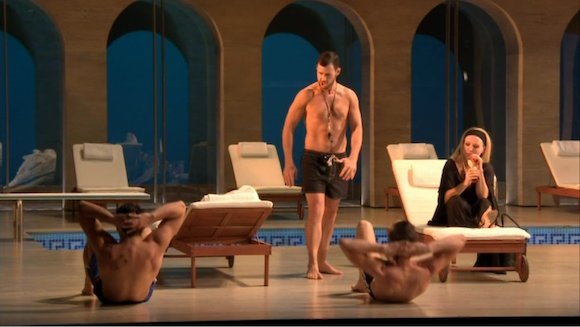 The orchestra is the Balthasar Neumann Ensemble conducted by Thomas Engelbrock. This is a group who play appropriate period instruments for anything from Monteverdi to Wagner. Here they sound terrific with very authentic sounding winds and some gorgeous playing that can range from martial to lushly romantic. It’s a fine score and it gets the performance it deserves here.

François Roussillon directs the video and I really can’t fault it. Even when there is video playing in the background, and it happens quite a bit, he captures it well. I watched on DVD; it’s a 2 disk set but there is a Blu-ray. The picture quality is top notch and the sound high quality on both surround and stereo tracks. Actually I found it hard to tell the difference. There are no extras but the booklet is highly informative as well as having a track listing and synopsis. Subtitle options are Italian, English, French, German, Korean and Japanese. 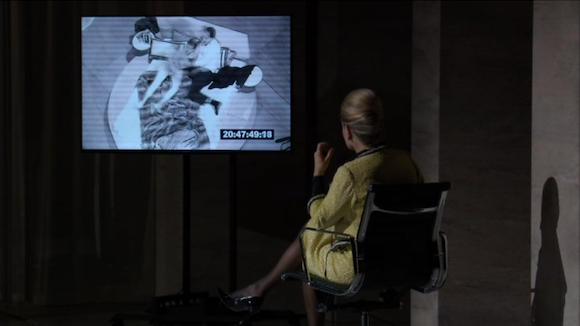 I’m not sure why Agrippina isn’t done more often for it’s really good. Maybe the difficulty of rounding up three really good counter-tenors? Whatever the reason, this production with its excellent transfer to disk is well worth a look. 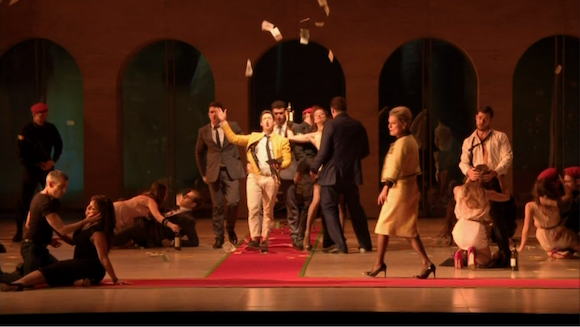