Collectìf’s latest show for the Toronto Summer Music Festival at Walter Hall last night was called Beyond Perception: What Haunts Us Now.  It presented three new multimedia works each curated and directed by one of the trio of singers.  The first piece, by Whitney O’Hearne featured arrangements of French works; both folk and classical that deal with the idea of La Dame Blanche; by turns sorceress or virgin bride.  Turning the idea of male defined female transgression upside down to celebrate women’s agency, O’Hearn combined arrangements of the chosen music for combinations of three voices and piano with soft focus atmospheric video rather reminiscent of Collectìf’s Winterreise show at Heliconian Hall.  The singing was beautiful and the concept intriguing.  Top notch accompaniment by Trevor Chartrand.

END_OF_DOCUMENT_TOKEN_TO_BE_REPLACED

There are a couple of interesting concerts coming up in the last week of the Toronto Summer Music Festival.  On the 24th at 7.30pm in Walter Hall you can see Collectìf in a “spooky” programme.  Collectìf is a group started by Danika Lorèn and friends.  They do shows that incorporate staging, art song and video and they are never boring.  (They also do adult cabaret but that’s another story!).  Wednesday’s show is called Beyond Perception: What Haunts Us Now and features three sections.  The first is built around the theme of La Dame Blanche, the second features Mahler’s Kindertotenlieder and the last deals with the myth of Daphne and Apollo.  Recommended.  And as an added incentive for operaramblings readers there’s a discount code OR10 which will get you $10 tickets.  Tickets from the Royal Conservatory Box Office online, in person or by phone.

END_OF_DOCUMENT_TOKEN_TO_BE_REPLACED

The second set of reGENERATION concerts of the Topronto Summer Music Festival took place yesterday at Walter Hall.  The song portion, unusually, consisted of 100% English language rep, mirroring the Griffey/Jones recital earlier in the wee.  The first concert kicked off with tenor Eric Laine and pianist Scott Downing with five songs from Finzi’s setting of Thomas Hardy; A Young Man’s Exhortation.  It was good.  Laine has a nice sense of style and very good diction.  The high notes are there though sometimes, especially at the end of a line, they don’t sound 100% secure.  There was some quite delicate accompaniment from Downing too.

END_OF_DOCUMENT_TOKEN_TO_BE_REPLACED

Last night’s Toronto Summer Music concert at the Church of the redeemer was headlined by Daniel Taylor, Charles Daniels and Steven Philcox but, somewhat to my surprise, also featured multiple fellows from both the art song and chamber music programmes.

The “headliners” kicked things off with Britten’s canticle Abraham and Isaac, based on one of the Chester Mystery Plays.  I thought I knew this piece but soon realised I was confusing it with the setting of Owen’s The Parable of the Old Man and the Young in the War Requiem!  It’s an interesting piece with a very medieval Catholic take on an Old Testament story.  It was performed here with the delicacy and attention to detail I’d expect from these performers.

END_OF_DOCUMENT_TOKEN_TO_BE_REPLACED

Anthony Dean Griffey and Warren Jones’ TSMF recital at Walter Hall last night was an all English language affair with offerings from both sides of the pond.  IT kicked off with Frank Bridge’s Three Songs for voice, viola and piano with the viola part played on the cello by David Heiss.  These might better be billed as for “Viola, piano and voice” as the viola part is much, much more interesting than the vocal line.  Really it felt more like a piece of chamber music that happened to include a vocalist.  Heiss played beautifully as did Jones and Griffey did what was to be done with the vocal line.

END_OF_DOCUMENT_TOKEN_TO_BE_REPLACED

There were three reGENERATION concerts in Walter Hall yesterday at 1pm, 4pm and 7.30pm.  It made for a long but interesting day.  As last year, each concert was a mix of vocal and chamber music.  The vocal program was not announced in advance so I’m working from notes and there could be the odd error.  Pleasingly, there were surtitles for the songs.  This is a huge improvement on a sheet of tiny print to be read in the dark! END_OF_DOCUMENT_TOKEN_TO_BE_REPLACED

Last night saw the first concert of this year’s Toronto Summer Music Festival.  The theme was “Beyond Borders” with most of the works presented; a mixture of piano, violin and vocal, having been influenced by other cultures/places or written in exile. 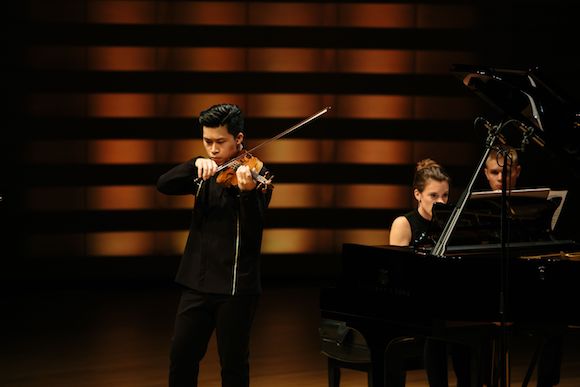 END_OF_DOCUMENT_TOKEN_TO_BE_REPLACED

The line up for the Toronto Summer Music Festival for this year, which runs July 11th to August 3rd, was unveiled last night by artistic director Jonathan Crow at the Arts and Letters Club.  The full details are here.  It’s impressive with high quality and lots of diversity.  so, just some personal comments and thoughts on the things I’ll be planning to see.  The art song fellow this year is Tony Dean-Griffey.  He’ll be working with Stephen Philcox on the Art of Song Academy programme.  Like last year the Academy  reGENERATION concerts will feature both chamber and vocal music and run on the three Saturdays; July 13th, 20th and 27th.  Dean-Griffey will give a recital with Warren Jones on July 16th at 7.30pm in Walter Hall.

There are five Koerner Hall concerts.  Opening night, July 11th, highlights the “Beyond Borders” theme of this year’s programme with a variety of works for assorted combinations of voice, chamber orchestra, string quartet, violin and piano including Adrienne Pieczonka singing the Strauss Vier letzte Lieder in a chamber arrangement by John Greer.  On the 17th the Dover Quartet present a Britten and Dvorák programme.  On the 25th, the Art of Time Ensemble have an eclectic looking show called From Franz Schubert to Freddie Mercury.  Not quite sure what to expect there!  The 30th sees Angela Hewitt performing Bach’s Goldberg Variations. and finally on August 1st there’s a chance to see Jonathan Crow performing Mozart’s “Turkish” concerto before Mahler’s Das Lied von der Erde (in the Schoenberg/Riehn arrangement) with Mario Bahg and Rihab Chaieb.  Gemma New conducts.

END_OF_DOCUMENT_TOKEN_TO_BE_REPLACED

So no Last Night of the Proms style extravaganza this year (Probably just as well, especially given the torrid weather). Instead it was a pot pourri of choral works, songs and excerpts from chamber works played mainly by members of the various academy programmes.  I’m not really sure what the point was as pretty much everything had been heard before, often in context.  Sometimes it seemed the main function was to keep the stagehands busy, as format succeeded format at short intervals.  So there was no sense of closure or celebration.  I wish I new what the answer is.  Obviously LNotP isn’t, with or without a Canadian spin.  Maybe the best thing would be to keep back one of the big name acts for the final show?

END_OF_DOCUMENT_TOKEN_TO_BE_REPLACED 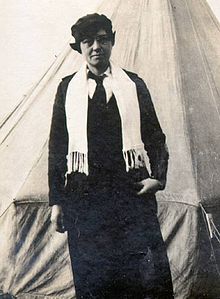 Your Daughter Fanny is a 45 minute long chamber opera with music by Alice Ho and libretto by Lisa Moore based on letters written by WW1 Newfoundland VAD nurse Frances Cluett (which can also be found in book form).  It was performed yesterday at Heliconian Hall by soprano Caroline Schiller with Duo Concertante, Nancy Dahn (violin) and Timothy Steeves (piano).

I really liked the music.  It was the first time I’ve heard a piece by Alice Ho that didn’t include traditional Chinese elements and it was stylistically interesting; rich textured, sometimes astringent, sometimes very lyrical with a very decent, singable vocal line.