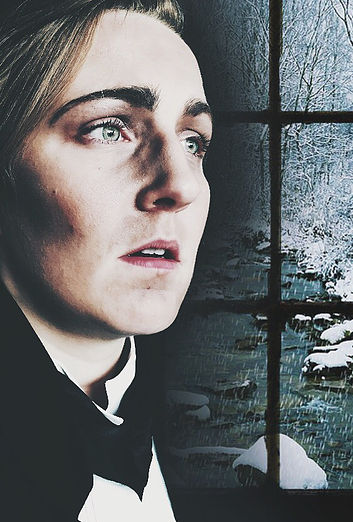 On the face of it the idea of reorganising Schubert’s Winterreise for three female voices and staging it as a kind of allegory isn’t an obvious one but Collectìf’s As a Stranger worked remarkably well.  The arrangement and distribution of the numbers was judicious; most of the songs went to a single singer, some were split and occasional and effective use was made of two or three voices in unison.  The idea behind the split being to make mezzo Whitney O’Hearne the narrator/traveller while sopranos Jennifer Krabbe and Danika Lorèn embodied the malign and benign aspects/characters of the story.  Heliconian Hall doesn’t offer a lot in the way of staging possibilities but well thought out costumes, a few props and a considerable, and quite sophisticated, video element added up to a pretty satisfying experience.  In the last number Jennifer relieved Tom King at the piano to allow the Leierman to stagger off into the wintry night.  All well thought out and well executed.

There was some pretty classy singing too.  Whitney has a lovely, darkish mezzo that perfectly suited the music.  She had a lot to do and carried the characterisation well for the full eighty minutes or so.  Danika continues to impress.  It’s almost too big a voice for Heliconian but she controls it well and she has the top end firmly in control.  And there are colours.  She can darken a quite beautiful tone apparently at will and she even has the confidence to use cabaret type techniques at times making the voice more dramatic and less classically lieder like.  Jennifer has a lighter voice that suits the music and is more the classic grad student soprano.  At this stage not as maturely impressive as the other two but there’s unquestionably potential there.  Tom King, the unsung (and mostly unsinging) hero of Collectìf, was terrific at the piano.  It takes a fair bit of stamina to get through Winterreise and he was a sympathetic and musical voice from first to last.

I think this is the third Collectìf show I’ve attended and I have thoroughly enjoyed all of them.  It’s a young, imaginative group trying really hard and doing some cool stuff.  Worth supporting.  And, finally and snarkily, if four kids with no budget can do sophisticated video and surtitles why can’t much more established companies?  Three times in the last twelve months I’ve been at shows that really needed them and didn’t have them.  Actually I’d go further.  They should be used for all lieder recitals instead of paper handouts.  It’s a much more satisfying audience experience.

1 thought on “As a Stranger”