Less a Toronto listings summary than a quick review of things going on in various real and virtual spaces.

END_OF_DOCUMENT_TOKEN_TO_BE_REPLACED

Two interesting and very different news items about the Toronto arts world appeared yesterday.  The first is essentially good news.  Loose Tea Music Theatre announced the hiring of a General Manager (Tim Crouch), a Director of Marketing (Rochelle Smith) and a Director of Development (Francesco Corsaro).  This is a pretty big move for what has been, for as long as I can remember, pretty much a one woman band.  Loose Tea is pretty much the only company in town that’s focussed on politically committed music theatre so this could presage some interesting developments.  More on this here.

END_OF_DOCUMENT_TOKEN_TO_BE_REPLACED

Dead Reckoning is a new musical from Loose Tea Theatre Company. The book and lyrics are by Lezlie Wade and the music by Scott Christian. It is written for five female actors and focusses on the life of Amelia Earhart and the true story of the teenage girl who received Amelia’s final distress signal. The complete work is something like 90 minutes long but last night we got to see a 30 minute film adaptation of the first part of the piece.

END_OF_DOCUMENT_TOKEN_TO_BE_REPLACED

I’ve just received news of programming into the fall and beyond from Tapestry, Toronto City Opera and Loose Tea Music Theatre.

Tapestry have announced three livestream concerts to be shown on their Youtube channel.

END_OF_DOCUMENT_TOKEN_TO_BE_REPLACED

So what am I still watching on-line?

What new discoveries have I made? END_OF_DOCUMENT_TOKEN_TO_BE_REPLACED

Loose Tea Music Theatre’s Carmen #YesAllWomen has been in the works for three years.  It went “live” this week with a production at Heliconian Hall.  It’s an intriguing show.  Dramatically and musically it’s recognisably based on Bizet’s Carmen but only just.  In Alaina Viau and Monica Pearce’s version the principal male character is one John Anderson, an Afghanistan vet with PTSD, his rival for Carmen is a rapper, Maximillian aka Hot God, and Michaela is Anderson’s estranged wife. 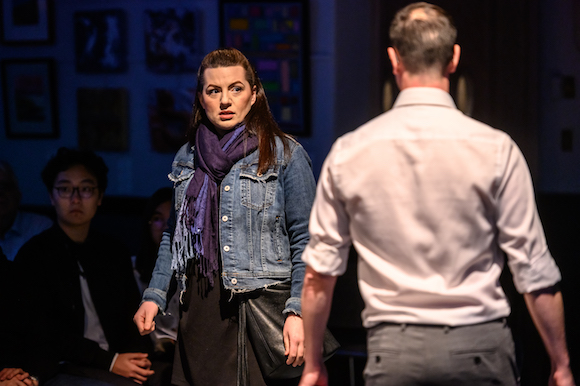 END_OF_DOCUMENT_TOKEN_TO_BE_REPLACED

Last night was the last performance at Heliconian Hall of Loose Tea Music Theatre’s double bill of Anne Frank operas.  The first half of the show centred on Grigori Frid’s monodrama for soprano and chamber ensemble (given here in piano score) The Diary of Anne Frank.   It’s a work in 21 scenes of which 15 were performed last night.  For a Soviet work of the 1970s it’s surprisingly modern in style with some interesting music for the piano.  The vocal part though is pretty unsympathetic and although Gillian Grossman managed it pretty well a lot of it lies too high for comfort or even comprehension.

END_OF_DOCUMENT_TOKEN_TO_BE_REPLACED

There’s another indie opera company in town; Loose Tea Music Theatre.  They are going to be putting on a crowd source funded transladaptation of Carmen called La tragédie de Carmen at Buddies in Bad Times on September the 6th, 7th and 8th.  Details of the show are here and the crowd source funding page is here.  This is no amateur effort.  It’s directed by Alaina Viau who has worked at the ROH.  The title role will be sung by Cassandra Warner, last seen in Opera Atelier’s Magic Flute, and the Don José is Ryan Harper, previously a Rodolfo for Against the Grain’s Tranzac La Bohème.

This was brought to my attention by Lisa Faieta who has a new blog, Soprano vs. the World.  Check it out!