Richard Jones’ production of Puccini’s La Bohème recorded at the Royal Opera House in 2020 is, at first glance, a highly conventional “traditional” La Bohème.  There’s no subtext.  The story unfolds strictly in line with the libretto.  And yet there’s something going on that raises it above the level of the typical canary fanciers’ La Bohème.  Ultimately I think it’s a combination of avoiding sentimentality or glitz or glamour and really focussing on the characters and the relationships between them.  It seems that the revival direction team of Julia Burbach and Simon Iorio and the cast have really worked on this.

END_OF_DOCUMENT_TOKEN_TO_BE_REPLACED

The recording of Bellini’s Norma made at the Royal Opera House, Covent Garden in 2016 is about as good as video recordings of opera go.  It has it all; a well thought through and well executed production concept, very fine musical values, great acting, judicious camera work and top notch sound and picture.  It doesn’t get much better.

END_OF_DOCUMENT_TOKEN_TO_BE_REPLACED

There’s been a lot of opera related programming broadcast on BBC TV recently.  Probably the biggest event was Jonas Kaufmann’s role debut as Otello in the Verdi opera conducted by Antonio Pappano but there’s also been a 90 minute documentary on Kaufmann and a two part series called Lucy Worsley’s Nights at the Opera and a broadcast of Brett Dean’s new Hamlet from Glyndebourne.  I haven’t yet watched the Hamlet but here are some thoughts on the other three shows, plus an extra bonus.

END_OF_DOCUMENT_TOKEN_TO_BE_REPLACED

Damiano Michieletto’s production of Rossini’s Guillaume Tell at the Royal Opera House in 2015 was controversial because of the replacement of the Act 3 scene where Austrian soldiers force Swiss girls to dance with them with something far more explicit.  It is a tough scene to watch but it’s absolutely consistent with a very thoughtful overall approach to the piece.  After all what do occupying troops do with village girls?  The director, rightly I think, sees the piece as being about the brutality of military occupation and colonialism but also recognises that the Tell legend, especially in its Schiller version is overlaid with euphemising Romanticism.  Michieletto’s production both strips away and draws attention to the Romanticisation.  He sets the piece in a roughly contemporary setting.  To me, the civilians look 1950s but Gesler’s men look more modern.  The actual action is played out unsentimentally, indeed brutally, in this time period.  The ballets, one of the principal euphemising agents, are all replaced by more realistic action.  To draw attention to how the legend has been transmitted two devices are introduced.  Tell’s son Jemmy has a comic book version of Schiller which he consults at key points and there’s a silent character; medieval Tell, straight out of the legend with feathered cap etc who appears whenever the morale of actual Tell or the Swiss in general needs a boost.  It sounds a bit corny but it really does the job.

END_OF_DOCUMENT_TOKEN_TO_BE_REPLACED

What’s become of David McVicar?  His 2015 production of Giodarno’s Andrea Chénier for the Royal Opera House seems typical of his recent work.  It looks expensive.  It features a starry cast.  He flirts with dramatic risk but in the last analysis it comes off as a bit tame and even sloppy.  Basically when the principals are at the centre of the drama it’s compelling stuff but when they are not it’s not and there are curious inconsistencies.

END_OF_DOCUMENT_TOKEN_TO_BE_REPLACED

In the booklet accompanying David McVicar’s production of Le nozze di Figaro, recorded at the Royal Opera house in 2006, there’s an essay by the director in which he raises all kinds of questions about the rise of the bourgeoisie, the nature of revolution and romantic conceptions of love.  He even appears to draw a parallel between Joseph II and Tony Blair. Then he declines to explain how he has embodied all these ideas on the stage and challenges us to “Watch, listen, participate”.  Well I did and I’m none the wiser.  What I see her is an essentially traditional approach; transferred cosmetically to 1830s France but so what?  It’s darker than some Figaro’s but not nearly as dark as, say, Guth.  Curiously, the main “extra” on the disks “Stage directions encoded in the music” tees this up much more clearly than the essay.

END_OF_DOCUMENT_TOKEN_TO_BE_REPLACED

Kasper Holten’s Royal Opera House production of Don Giovanni, seen in cinemas, is now available on DVD and Blu-ray.  It’s a visually and dramatically complex production so it’s probably as well that there’s plenty of explanatory material on the disks and in the booklet.  Es Devlin’s set is a two storey structure that rotates and serves as a screen for a heavy use of video projections by Luke Halls.  These start wth the 2065 names of the women Don Giovanni has seduced and seem to be mostly about what’s going on in Don Giovanni’s head.  The sequence during Fin ch’han dal vino calda la testa is particularly spectacular.

END_OF_DOCUMENT_TOKEN_TO_BE_REPLACED

Handel’s Acis and Galatea is a peculiar piece in some ways.  It was written to be performed at Cannon’s, the Edgware residence of the then Earl of Caernavon, presumably for his guests.  Apparently the performance style was to have the singers sing from music stands in front of a painted backdrop.  So, a sort of oratorio with curtains.  It’s not uncommon to stage Handel oratorios as opera these days.  Theodora is done quite often and even Messiah has been staged so it’s no great surprise that Acis and Galatea should be given a similar treatment.  In fact Wayne McGregor’s 2009 Covent Garden production stages it as an opera and a ballet simultaneously combining the resources of the Royal Ballet and the Royal Opera. 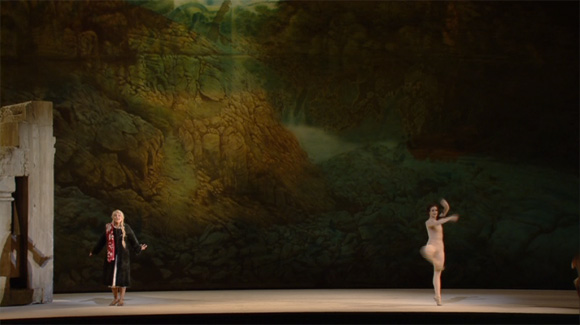 END_OF_DOCUMENT_TOKEN_TO_BE_REPLACED

Francesca Zambello’s Carmen for the Royal Opera House has more going for it than is immediately apparent.  On the face of it it’s a very traditional, conservative production; period costumes, literal sets, hordes of kids in Acts 1 and 4, live animals, but a close look reveals rather more.  Zambello reveals her intentions during the overture where we see a manacled, distraught Don José dragged to execution by a masked executioner.  This is going to be Don José’s story rather than one that focuses almost exclusively on the title character.  What we see here is a stark contrast between what Don José really wants; respectability, an obedient wife, conformity with the Church, honour and what key choices, accidents and conflicts drive him to; criminality, liminality, execution and, we may suppose, damnation.  The staging subtly highlights each of the key moments in Don José’s descent; his arrest and demotion in Act1, the fight with Zuniga in Act 2 and the realisation, in Act 3, that Carmen will never be the women he really wants reinforced by Micaëla’s aria that ironically offers him the choice he can no longer make and does so unmistakeably in terms of Catholic eschatology.  There is so much more going on here than a sexy woman and some pretty tunes. 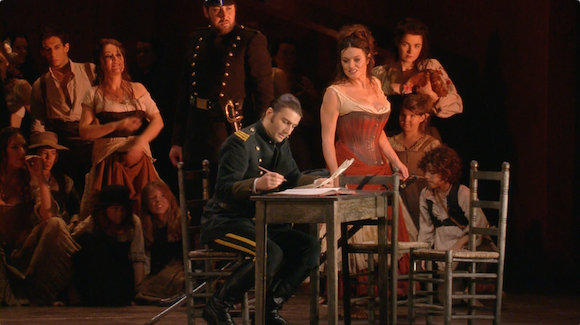