One of the interesting things about Offenbach’s Tales of Hoffmann is that there is no definitive edition so creative teams have a lot of flexibility in how they cut and combine material.  Director Tobias Kratzer and conductor Carlo Rizzi created a really interesting take for their production at Dutch National Opera in 2018.  It’s a very modern, very dark interpretation that while it keeps Offenbach’s music (though not interpolations like Scintille diamante) and the words are all from (some version of) the libretto the storyline varies a lot from what we are used to while keeping intact the central psychological fact that Hoffmann is incapable of relating to real women.

END_OF_DOCUMENT_TOKEN_TO_BE_REPLACED

I’m a bit surprised that Berlioz’ 1838 opera Benvenuto Cellini hasn’t come my way before. It’s got all the operatic elements; romance, politics, murder (and the Pope) etc and some really rather good music.  There’s a lovely duet between Cellini and his girl, Teresa, in the first act and Cellini’s aria Sur les monts les plus sauvages is long and demanding in the way that Rossini writes long and demanding tenor arias.  The plot maybe has a few holes.  One might expect that after the pope has decreed that Cellini will be hanged if he doesn’t finish a statue by nightfall that he might just get on with it rather than running around fighting duels and stuff but there you have it.  It’s French opera after all.

END_OF_DOCUMENT_TOKEN_TO_BE_REPLACED

Damiano Michieletto’s production of Rossini’s Guillaume Tell at the Royal Opera House in 2015 was controversial because of the replacement of the Act 3 scene where Austrian soldiers force Swiss girls to dance with them with something far more explicit.  It is a tough scene to watch but it’s absolutely consistent with a very thoughtful overall approach to the piece.  After all what do occupying troops do with village girls?  The director, rightly I think, sees the piece as being about the brutality of military occupation and colonialism but also recognises that the Tell legend, especially in its Schiller version is overlaid with euphemising Romanticism.  Michieletto’s production both strips away and draws attention to the Romanticisation.  He sets the piece in a roughly contemporary setting.  To me, the civilians look 1950s but Gesler’s men look more modern.  The actual action is played out unsentimentally, indeed brutally, in this time period.  The ballets, one of the principal euphemising agents, are all replaced by more realistic action.  To draw attention to how the legend has been transmitted two devices are introduced.  Tell’s son Jemmy has a comic book version of Schiller which he consults at key points and there’s a silent character; medieval Tell, straight out of the legend with feathered cap etc who appears whenever the morale of actual Tell or the Swiss in general needs a boost.  It sounds a bit corny but it really does the job.

END_OF_DOCUMENT_TOKEN_TO_BE_REPLACED

Just as Rossini’s version of Il barbiere di Siviglia completely eclipsed Paisiello’s version, so Verdi’s Otello sounded the death knell for an earlier version; ironically enough by Rossini.  It’s a bit surprising as the Rossini version is not bad at all despite having a rather patchy libretto and being hard to cast.  The first thing one notices is that the story isn’t even close to Shakespeare/Verdi.  This is because the libretto was based on a French play by Jean-François Ducis that was popular in the 18th century.  I don’t know whether the plot’s weaknesses are due to Ducis or the librettist but there are a few.  There’s no Cassio so the motivation for Jago’s plotting is unclear.  All the Venetian notables (bar perhaps the Doge) hate Otello but Jago doesn’t seem to have any special reason for animosity.  Between the end of Act 2 and the beginning of Act 3 Otello is exiled.  There is no explanation.  The finale is abrupt and weak.  Immediately after Otello kills Desdemona the gang of notables burst in to the room and appear to be completely reconciled to Otello and to him marrying Desdemona, despite having spent the rest of the opera chewing chips about this.  In fact one could argue that the happy ending variant (yes, there was one) is the more plausible as it would only take the guys to arrive about ten bars sooner for that to be the logical outcome.  As it is, Otello listens with incredulity to the change of heart and, not unreasonably, kills himself. 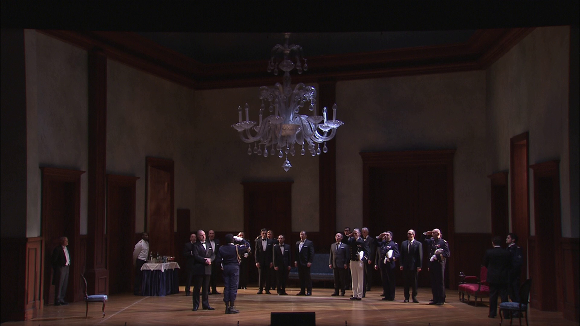 END_OF_DOCUMENT_TOKEN_TO_BE_REPLACED

Rossini’s La Donna del Lago is based on the Walter Scott poem, itself a deliberately romantic view of Scottish history, simplified until not much is left but the rivalry for the heroine’s hand by her three suitors and a completely unexplained war between the king of Scotland and the Clan Alpine.  Dramatically it’s thin indeed but it’s Rossini so there is crazy virtuosic music and it’s very hard to cast.  One needs two mezzos; one a mistress of Rossinian coloratura, the other more dramatic, and two tenors; both of which can do the crazy high stuff.  The supporting roles aren’t easy either.  Realistically only a major house could cast this adequately.