A Woman’s Voice is a record with 84 minutes of music for female voices and piano by Alice Ping Yee Ho.  It’s a mixture of songs and excerpts from operas and a plkay.  All but one track feature Toronto based artists who include no less than three Norcop prize winners.  Overall, I found the songs more fun to listen to than the opera excerpts though they were interesting in their own way too and I’m seriously intrigued by a couple of them that I haven’t seen but now want to.

END_OF_DOCUMENT_TOKEN_TO_BE_REPLACED

Mr. Emmet Takes a Walk is the latest in the series of rereleases of works by Peter Maxwell Davies performed by the Manchester ensemble Psappha.  The work premiered in 2000 and was recorded in 2005 and it’s the composer’s penultimate work for the stage. (FWIW I’ve heard five of PMD’s stage works but never seen one performed).

The libretto, by David Pountney, describes what goes on in Mr. Emmet’s head as he prepares to commit suicide by having a train run over his head.  It’s a series of blackly comic episodes including. negotiating a deal with Hungarians in a Japanese hotel, a sinister encounter with a heating engineer, a cabaret act and more.  The scenes are interspersed with pre-recorded lists of “things to remember” including “things to dislike” like Americans and New Labour.  Like other PMD pieces the instrumentalists are sometimes incorporated i the stage action.

END_OF_DOCUMENT_TOKEN_TO_BE_REPLACED

The current offering from Operavision on Youtube is the 2020 production by Opera North of Weill’s Seven Deadly Sins livestreamed from Leeds Playhouse in November 2020.  It was Pay to View then but now it’s available for free until October. 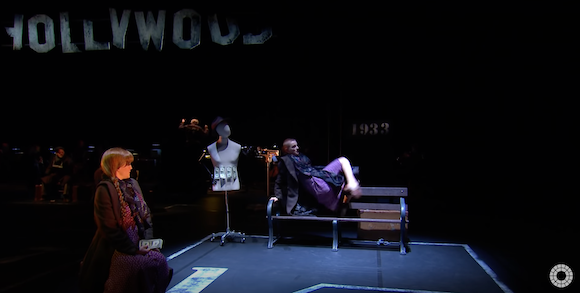 END_OF_DOCUMENT_TOKEN_TO_BE_REPLACED

Yesterday’s RBA concert was titled Celebrating the Invictus Games.  Now the Invictus Games is a sporting competition for athletes disabled on military service.  It has royal patronage and has clearly become part of the official pageantry of celebrating all things military, as witnessed by the presence of the Lieutenant Governors of Ontario and Alberta at yesterday’s concert.  For me it raises all kinds of questions about why we put the military on a pedestal and how we do it and that is very tied up with the choice of rep at a concert like yesterdays.  I’ll come back to that at the end of this piece, after reviewing what we actually heard.

END_OF_DOCUMENT_TOKEN_TO_BE_REPLACED

The current Canadian Children’s Opera Company show; Brundibár, represents something of a new direction from the company.  Previous shows, at least those I’ve seen, have been quite light and based, typically, on fantasy, fable or popular history.  The current offering is altogether more serious.  At its core is Brundibár, a children’s opera written by Hans Krása for a Prague orphanage in 1939 and subsequently performed over fifty times in the “showcase” concentration camp at Terezin. END_OF_DOCUMENT_TOKEN_TO_BE_REPLACED

Death in Venice is a curious opera.  Based on a Thomas Mann novella, it concerns the aging writer Gustav von Aschenbch and his meditations on aging and art, as well as his obsession with a Polish boy encountered at his Venice hotel.  Very little actually happens.  Aschenbach has a series of encounters with quotidien characters such as the hotel manager and a hairdresser but mostly he observes and what we hear are a series of inner monologues.  To work as theatre Aschenbach must capture our interest and our sympathy.  If he doesn’t the piece can be incredibly boring and irritating.