The recording of Bellini’s Norma made at the Royal Opera House, Covent Garden in 2016 is about as good as video recordings of opera go.  It has it all; a well thought through and well executed production concept, very fine musical values, great acting, judicious camera work and top notch sound and picture.  It doesn’t get much better.

Let’s start with the production.  It’s directed by Alex Ollé with designs by Alfons Flores (sets), Lluc Castells (costumes) and Marco Filibeck (lighting; all of La Fura del Baus.  The look and feel is Church of Jesus Christ of the Machine Gun.  It’s very Spanish and very Catholic.  The carefully detailed military uniforms evoke Franco era Spain and the clerical garb, relentless crucifixes and even auto da fe pointy hoods support that.  The forest itself is made up of a vast tangle of crucifixes.  There are far more careful details than I can reasonably describe so let me just give one.  In the children’s bedroom in Act 2 Scene 1 there’s a TV.  It’s playing a cartoon about rabbits.  I don’t think there’s anything special about it being rabbits but that someone has thought about what should be playing on the TV is typical of the care taken here.

Within this visually and symbolically oppressive setting, Norma is the woman who must carry the freight.  Personal happiness is impossible in a society built around service to an implacable and blood thirsty God.  It’s a world that craves someone who will “Make Gaul Great Again” rather than a human being who seeks fulfilment at a personal level.  It’s a huge task to embody the various personae that Norma must assume but Sonya Yoncheva achieves it in this performance.

There is terrific singing across the board and some very fine acting.  Yoncheva sounds amazing and her acting performance is spectacular.  Her voice is very beautiful and full of character with just a hint of strain showing towards the end.  She’s well matched on every count by Joseph Calleja as a business suit clad Pollione.  Her Adalgisais Sonia Ganassi who also sings very beautifully though her acting is not quite in the same class as Yoncheva and Calleja.  For sheer auditory delight the trio at the end of Act 1 would be hard to beat.  Brindley Sherratt makes a very convincing Oroveso, looking and sounding like a particularly blood thirsty Carlist chaplain.

The ROH orchestra and chorus are on terrific form; especially the former.  Antonio Pappano’s conducting balances drama and delicacy rather nicely and the superior sound quality helps bring out the details in the orchestra.

Jonathan Haswell directs for video and he captures the production very well without intrusive flourishes.  It’s how I think opera should be filmed.  He’s helped by a very good picture on Blu-ray.  Unsurprisingly for Norma, the stage is often quite dark and there’s a lot of detail.  It takes both directorial confidence and excellent video quality to make scene setting shots work.  As mentioned the sound is also top notch in both its DTS-HD surround mix and the 24 bit stereo track.

There is some decent extra material on the disk with interviews with cast members and Pappano outlining how the piece works musically.  The booklet has a couple of good essays and a synopsis but no track listing (about the only thing I would criticise).  Subtitle options are English, French, German, Korean and Japanese. 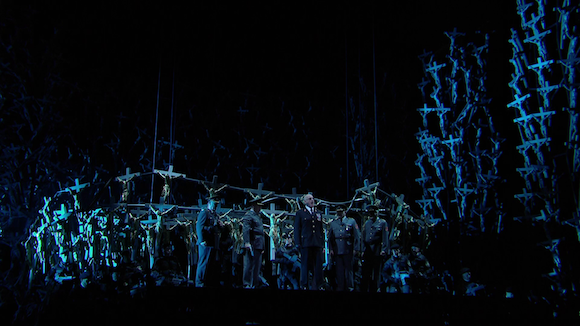 I guess the main competition for this disk is the Kevin Newberry production recorded in Barcelona.  That has terrific singing, especially from Sondra Radvanovsky, but the ROH version is as good in that department.  Ollé’s production provides much more insight into the drama and Pappano’s conducting probes the score more deeply.  So, of recent recordings, this is a clear winner.  It’s worth noting that Guberova’s classic Munich performance is also available on DVD but it can’t match the more recent recordings technically. 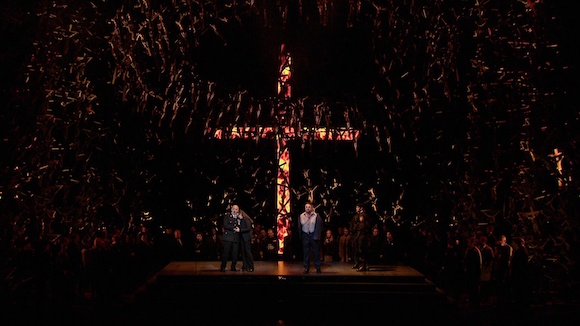 2 thoughts on “A Norma for our times”