Gluck’s Alceste is not as well known as Orfeo ed Eurydice or the Iphigénie operas but in some ways it’s an even better example of what Gluck meant by “reform”.  It’s simple, restrained and elegant.  The plot has some similarities with Orfeo.  The good king of Thessaly, Admète, is doomed to die unless someone else volunteers in his place.  Naturally enough, this being opera, his wife Alceste volunteers.  There is much dignified lamenting.  She descends to Hades.  Husband and wife reproach each other for their selfishness in being the one to die.  Hercules shows up and, in gratitude for earlier hospitality, saves the day.  There is (dignified) rejoicing.  It;s an easy score to listen to with plenty of good tunes but no blockbuster, memorable, numbers. 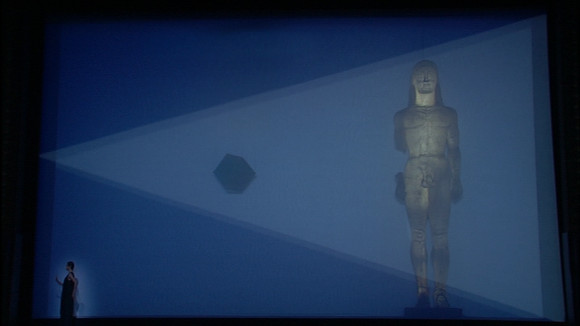 END_OF_DOCUMENT_TOKEN_TO_BE_REPLACED

Norbert Palej’s new piece East o’the Sun and West o’the Moon, commissioned by the Canadian Children’s Opera Company opened at the Enwave Theatre at Harbourfront last night.  It’s based on a Norwegian folk tale and tells the story of a girl, Rose, who does a deal with a magic white bear to feed her starving family.  The bear, of course, is really a prince who has been cursed by a witch.  Rose tricks the witch and marries the prince.  There are also trolls.  Lots of them.

END_OF_DOCUMENT_TOKEN_TO_BE_REPLACED

Last Friday the BBC broadcast the English National Opera production of Berlioz’ The Damnation of Faust directed by former Python Terry Gilliam. This was filmed back in May at the Coliseum and got positive to glowing reviews for its visual inventiveness. So how well did it come over as a TV broadcast?

The bottom line is “probably less well than in the theatre”. Gilliam’s approach to staging this almost unstageable “opera” is to treat us to a visual romp through German history from the late 19th century through WW1 to Auschwitz and in between we get lots of Nazis and Jews. There is heavy use of projection, film and special effects and one imagines it must have been incredibly spectacular in the theatre. Unfortunately much of this is lost in the filming for TV. There are certainly some arresting moments but not enough to keep one locked into the action and the director’s vision. And, once when starts to ‘lose the plot’ the more inconsistent and incongruous much of it seems. It doesn’t help that there are long passages where the orchestra is playing and action is going on on stage and it all feels a bit more like a movie soundtrack than an opera. Also, of course it being the ENO, it’s in English. The broadcast subtitled the chorus but not the soloists which was a bit odd and certainly made things harder to follow. The biggest dramatic problem I had was with the treatment of Marguerite. She’s Jewish but seems to have a serious “Aryan wannabee” complex. There’s a bizarre scene where she comes home, lights a menorah, puts on a blonde, pigtailed wig and swoons over a giant poster of a ideally beautiful Hitler Youth on the wall of the building opposite. She then takes Faust, who looks more like George Bernard Shaw on an off day, as her lover, apparently as some sort of substitute. Marguerite is then carted off to Auschwitz and death but there’s no sin here. She’s killed because she’s Jewish along with hordes of others. So there is nothing to redeem which makes the final scene really weird. Marguerite ascends to (Christian) heaven to words that are overtly Christian sung by a chorus of gassed Jewish corpses. So spectacular but a bit incoherent and on TV the incoherence tends to overwhelm the spectacular. I really would pay to see this in the theatre though.

Pretty good performances on the whole. Peter Hoare is Faust and he is convincing though somewhat overchallenged by some of his higher passages. Christopher Purves is near perfect as Mephistopheles (though surely the Prince of Darkness would not be caught wearing a clip-on tie!). He’s sardonic, funny and vocally and dramatically assured. Christine Rice is vocally excellent and does her best with the odd Marguerite she has to project. I wish Edward Gardner in the pit had managed a bit more drama in the orchestral passages. With Nazis on stage executing Communists, smashing Jewish shops and staging the odd Nuremberg rally it was far too easy to forget there was any music going on.

Here’s Marguerite with her pigtails and menorah 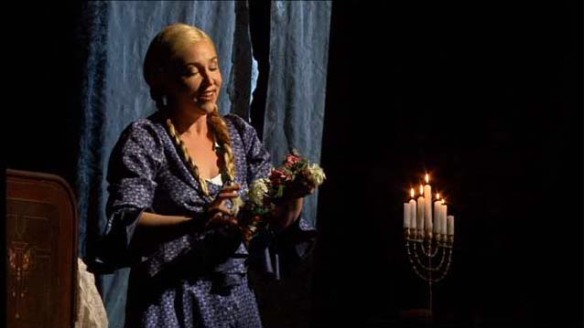 And, to emphasise the subtlety of it all, here’s Faust crucified on a swastika with Adolph going nuts in the background.