The main event in last night’s programme at the TSO was the first act of Die Walküre in concert performance but it was preceded by The Ride of the Valkyries and, more substantially (if not louder) Berg’s Three Pieces for Orchestra Op.6.  It’s an interesting piece; post tonally expressionist with obvious homages to both Wagner and, especially, Mahler.  Sir Andrew gave it one of the best introductions of the kind that I have heard; situating it not just in the Viennese musical lineage but also drawing helpful parallels with the visual arts; Klimt, Kokoschka etc.  He also produced a reading of great clarity from the orchestra.  It’s easy for a big piece of this kind to dissolve into a sort of aural mush and thereby give the “I don’t like this modern stuff” crowd ammunition that it’s just “noise”.  Here the various strands, the references and even the musical jokes of the three movements were clearly delineated.  Lovely stuff. 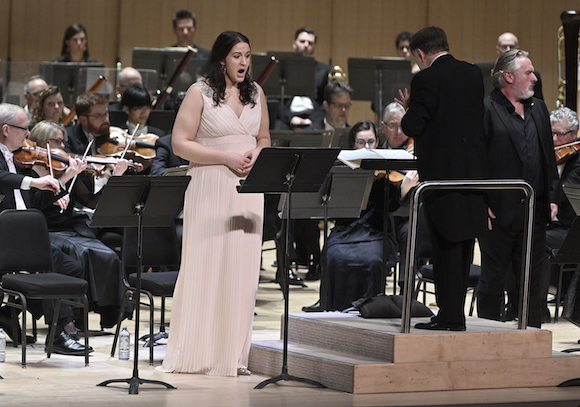 The main event brought (extremely tall) soprano Lise Davidsen, tenor Simon O’Neill and bass Brindley Sherratt to the stage for the Die Walküre.  I guess in all of Wagner this is the one act of the multi-act operas that really stands alone as a piece of drama.  Even without set, props or costumes the story telling was crystal clear here and without those distractions it’s easier to focus on how Wagner uses the structures of the music to support the story.  All the singers were in fine form with power enough for these demanding roles.  Neither Davidsen nor O’Neill sounded stressed even in the big climactic moments and the latter’s Winterstürme was properly lyrical.  Sherratt’s booming bass was rock solid.  Again, I’d say the dominant feature of the conducting was clarity.  I guess if anyone has figured out how to make that happen at Roy Thomson it ought to be Sir Andrew.  He’s had plenty of practice!  Anyway, the strands of the orchestral music were clear and the singer/orchestra balance made pretty much every word audible.  It was a very satisfying thing to listen to.

This programme is running again on Saturday at 8pm.  If last night is anything to go by tickets will not be hard to get.