Last night marked the last performance I plan on seeing before the holidays so it’s time for the annual “best of” posting.  So what did your scribe enjoy or admire the most in 2019?  Let’s look at it by categories.

The COC had a decent year but two of their shows stood out for me.  David McVicar’s production of Rusalka in October was perhaps all round the best thing the COC have done in years.  The production was clever in that interrogated the material enough to ask lots of questions for those willing to think about them without doing anything to upset those not so interested.  Musically one really can’t imagine hearing Rusalka sung or played better anywhere in the world.  The other winner was Elektra in January.  The orchestra and the singing was the winner here, especially Christine Goerke, but the production was better than average and we don’t see enough of the great modern classics in the Four Seasons stage.

Away from the COC, I was much taken with Against the Grain’s production of Vivier’s Kopernikus back in April. This was a really unsettling exploration of life after death brilliantly realised.  Then there was Tapestry’s May production of Dean Burry’s new work Shanawdithit.  This one tells the haunting story of the last of the Beothuck but it’s more than that.  It’s a highly effective metaphor for Indigenous culture in Canada.  A work of real importance.

Three shows stood out for me in this category.  Soundstreams’ November production of operas in Cree and Sami, Two Odysseys, was an intriguing contrast in musical styles and a definite hit.  A sweltering June night saw the funniest show of the year; Bon Appetit from Muse 9 productions.  It featured three very funny short operas about food.  Rather a shame that only a handful of people got to see the only Toronto performance.  The best student show of the year was the GGS November production of Jonathan Dove’s Siren Song; a funny and touching short chamber opera about a deluded sailor and a con man.

I got to see more “plays with music”  and straight theatre this year than has been my wont.  Mostly I have only engaged with this kind of show when there’s an operatic element or something that resonates with other stuff I’m doing but I have found branching out in this direction rewarding.  I think I’ll be doing more of it in future and I begin to wonder whether the future of “classical” music theatre doesn’t lie more with this kind of show and chamber opera than with the impossibly expensive to produce stuff.  Three shows caught my attention in particular.  At the beginning of the year Ho Ka Kei’s take on the last canonical part of the story of the House of Atreus; Iphigenia and the Furies (on Taurian Land) provided a fascinating counterpoint to the COC’s Elektra.  It was also very, very funny.  Theatre Gargantua’s The Wager in November was a madcap comedy on a very serious theme (fake news/fact denial) with surprisingly good singing.  Then there was The Ward Cabaret at Harbourfront in December.  It was a really interesting exploration of Toronto and the immigrant experience.

There were a couple of standout nights at the TSO.  Back in February Sir Andrew Davis produced the best playing from the TSO I’ve ever heard along with superb singing in a concert version of Act 1 of Die Walküre.  Then in September Barbara Hannigan and John Storgårds combined in a really intriguing show that was seen by far too few people.

There were a couple of cracking concerts in Larry Beckwith’s Confluence series.  In April ‘Tis Nature’s Voice: Henry Purcell Reimagined blew the cobwebs off the baroque with a multi-cultural reinterpretation of Purcell.  Later in the year Marion Newman and friends explored Indigenous themes in classical music with works by Indigenous creators and/or Indigenous themes.

Mazzoleni Songmasters had a strong year but for me the standout was Adrianne Pieczonka’s recital in November.  It was an object lesson in how to sing art song.  It doesn’t get much better.  This series, along with Confluence, is, for me, a must see series.

A bit of an oddball but quite memorable was a concert in commemoration of Armenian composer Komitas at Koerner in October.  Skilfully curated by Sarouj Kradjian it featured fine performances by Russell Braun and Lynn Isnar, among others.

Soundstreams’ fifth iteration of Electric Messiah was the best yet, showing that the hoariest of old chestnuts can be intriguingly freshened up and that a concept can be worked on and kept alive and interesting. 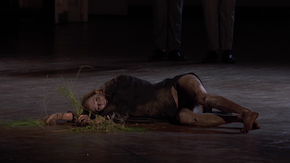 I didn’t think it was a banner year for videos but there were a couple of standouts.  The release of Brett Dean’s Hamlet was very welcome and there was a memorably creepy Krzysof Warlikowski production of Berg’s Wozzeck from DNO.

On CD a couple of good ones came my way in March.  I really like Christian Gerhaher’s Mahler disk with the OSM showing a real lieder approach to the orchestral versions of the major song cycles.  Gerhaher was also involved in a project to record the music composed in Terezín/Theresienstadt.  It’s an important and moving documentary record.

No “best of 2019” would be complete without Barbara Hannigan’s master class with Maeve Palmer and the UoT Contemporary Music Ensemble.  The subject was Ligeti’s Mysteries of the Macabre and it was insightful and sometimes very, very funny.  The concert performance of it a few weeks later was rather good too.