Alban Berg’s Wozzeck seems to attract just about every possible treatment from directors other than a straightforwardly literal one.  Krzysof Warlikowski’s approach, seen at Dutch National Opera in 2017, is to go back to the original story on which the Büchner play, in its turn the source for the opera, is based.  Wrapped around that are several interesting ideas which I can’t fully unpack but which make for a rather creepy but compelling production.  Alas, the disk package has nothing to say about the production so, interpretively, one is on one’s own.

The piece opens with a silent prologue featuring children in formal clothes competing in a ballroom dancing competition.  There’s one child in casual clothes.  It seems reasonable to assume this is Marie’s child and so it proves.  Piano music, then disco comes in.  Wozzeck appears sweeping the floor.  The children chase him and throw things at him.  Then we get a narration of the original 1821 murder story (in Dutch).  After about seven minutes Berg’s opera begins. 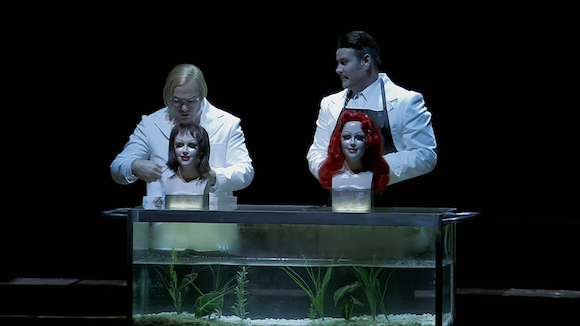 The set is a dark surfaced box.  Many of the surfaces appear to be reflective.  Within this box, fairly sparse set elements are deployed, often with one scene blending into the next. When that doesn’t happen (beginnings of Acts 2 and 3 for example) action shifts to in front of the curtain.  It’s pretty clear that there are comings and goings and other stuff going on on stage that the video doesn’t capture.  I strongly suspect that this is because the reflective box doesn’t film well and so video director François Roussillon uses more close ups than he usually does.  This does have the advantage of making the creepiness more intense.

There are no soldiers in this production.  Wozzeck is a hairdresser (see original story) and Marie is very clearly a tart.  The Drum-Major is a sort of lounge lizard.  The setting is more or less modern which is occasionally incongruous.  After all, even Germans don’t sing folk songs in discos.  There are some interesting characterizations.  The Captain is more obviously mad than is sometimes apparent and the Doctor’s assumption that the primary purpose of his patients is to provide fodder for experiments is very plain.

Marie’s child is more involved than usual and brings the piece to a truly creepy conclusion.  Wozzeck has cut his wrists and left his razor in an aquarium which is now blood red.  The doctor’s anatomical model is still on stage.  During the “Hip! Hop!” passage the boy walks backwards and forwards taking the organs from the model and dropping them into the aquarium.  There’s a lot like that including a fleeting appearance by Mickey and Minnie Mouse.  It’s hard to unpack all the individual elements but, as a whole, it seems quite coherent and effective in conveying the basic message that “a good life is not for poor people” (for whatever value you care to assign to “good”).

The performances by all concerned are musically very good and consistent with the director’s concept.  Chris Maltman is extremely lyrical as Wozzeck and conveys his quiet hopelessness extremely well.  Eva-Maria Westbroek is a full blooded Marie; oozing sexuality.  Perhaps best of all is Willard White as an imposing and utterly callous Doctor. Marcel Beekman really ups the creep factor as the Captain (and the Madman).  Frank van Aken seems a little understated as the Drum Major but I think that’s the production.  There’s no flashy uniform and no fight scene.  Jacob Jutte doesn’t have much singing to do as Marie’s child but he is on stage a lot and it’s a very fine performance for a young boy.  The orchestra is the Netherlands Philharmonic and it sounds really good; clear, incisive and dramatic.  Obviously the conducting of Marc Albrecht has much to do with that as well as the really clear, balanced sound on Blu-ray.

Technically the disk has the video and audio (DTS-HD-MA and stereo) that one expects on Blu-ray though the cameras have, as previously pointed out, had a hard time capturing certain aspects of the set.  The booklet has a synopsis, a historical essay, track listings and bios.  It really could have used director’s notes.  Subtitle options are English, French, German, Japanese and Korean. 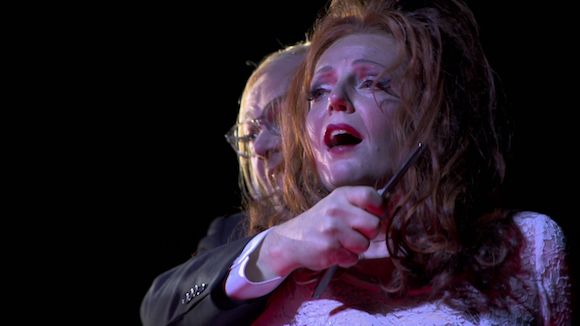 There are not many Wozzecks on Blu-ray.  I’d take this one over the Tcherniakov or the Homoki.  There’s also a Kentridge production that was recorded in Salzburg and looks fascinating but which I haven’t seen.  It’s a co-pro with the Met and the COC so one hopes (a) that it gets an HD broadcast and (b) the COC can come up with the cash to do it in Toronto.  On DVD there’s also the Bieito production which is excellent.  Anyone wanting a genuinely traditional Wozzeck will have to go back to the archives as there’s nothing that fits that description currently available.