After what seems like an interminable series of reviews of DVDs that don’t do full justice to the product on stage I finally got to look at one that presented the production almost as if one had been in the theatre. It’s an Opus Arte disc of Calixto Bieito’s production of Berg’s Wozzeck staged in Barcelona in 2007. Bieito is seen by many as the epitome of Regietheater directors and many people will write off any of his productions without further ado. Not me. I found this Wozzeck by turns powerful, compelling, revolting and sometimes puzzling but never dull or disrespectful.

Its set in a chemical factory. The workers, including Wozzeck and Marie, inhabit the lowest, most polluted levels, wear overalls and are dirty. The higher caste characters inhabit the upper levels and get fancier costumes. Marie’s affair with the Drum Major is signified both by her physical elevation and her change of clothes to a slinky dress.

There are any number of striking visual images from the doctor carrying out a grisly autopsy through the Drum Major, dressed like an Elvis impersonator, humping Marie’s child’s rocking horse, to the eerie green and red lighting of the penultimate scene where a nude (why?) chorus dance around Wozzeck with Marie’s corpse.

Not all the details are obvious but the overall impression of Wozzeck as an untermensch alienated and degraded, driven to madness and murder by a society that cares nothing for him or his like is compelling. I’m including more and larger screen caps than usual because much of it is hard to describe. The Personenregie is exceptional. The chorus in particular is handled with great dramaturgical skill. All in all, really good theatre.

The singing and acting are really strong. My opinion of Franz Hawlata, who plays the title role, continues to soar. He is superb and it’s a measure of his acting skills that I didn’t even recognize him at first. Angela Denoke sings Marie and she brings a lyricism to the role that is almost terrifying amongst the general bleakness. 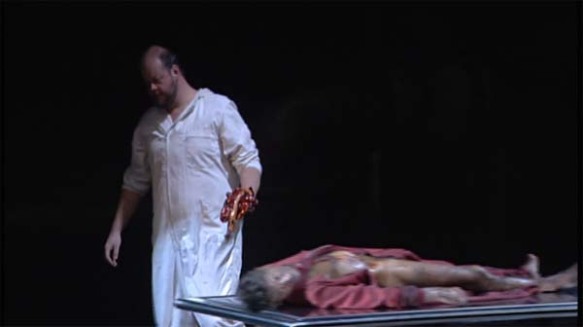 Johann Tilli is the doctor. He seems a bigger presence in this production than some others. Fine support, too from the other roles. Sebastian Weigle conducts and he gets some really incisive playing out of his orchestra, helped by the recorded sound quality. 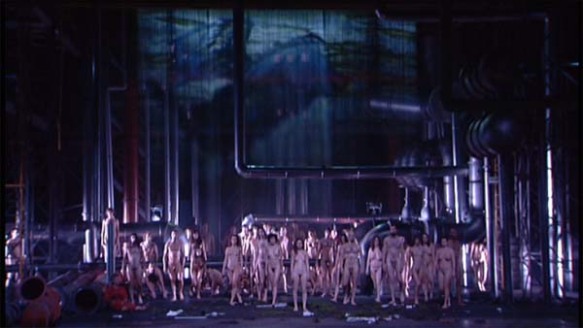 For once, the production for DVD is near perfect. The video director, Pietro d’Agostino, isn’t seduced into closing in too much on the action and lets us see much of Bieito’s complex overall picture ( such as the above where the, nude, chorus, enters below a video projection of a loon taking off. OK I don’t get it but the image is striking). The picture quality is good 16:9 anamorphic. It’s maybe not quite up to some recent productions filmed in HD but it’s way better than the typical 1990s DVD. The DTS 5.1 soundtrack is exceptional. It’s aurally one of the best opera DVDs I have experienced. It’s crisp, clear and with terrific spatial depth. There’s also LPCM stereo. There are subtitles in English, French, German, Castilian, Italian and Catalan. Extras include interviews with Weigle and Bielto.

ETA May 15, 2019:  Since this disk was released there have been several new recordings of Wozzeck; all of which have strong points, especially the Warlikowski production from Amsterdam. Some are also available with the obvious advantage of Blu-ray.  Nonetheless this remains a high recommendation