END_OF_DOCUMENT_TOKEN_TO_BE_REPLACED

Earlier this year the Metropolitan opera staged Borodin’s Prince Igor for the first time in nearly a hundred years with an HD broadcast and a DVD/Blu-ray release to boot.  It’s an odd work.  It’s quite long; a prologue and three acts running over three hours and it’s very episodic.  The prologue takes place in Ptivl; the principality of which I gor is prince.  He’s about to lead his army against the invading Polovtsians.  There are dark omens.  The next thing we see, as Act 1 opens, is that Igor is defeated and a captive of Khan Konchak who’s daughter is now in love with Igor’s son.  It’s all just happened.  Cue lots of exotic Polovtsiania.  In Act 2 we are back in Ptivl where Galitsky is making trouble for his sister, Igor’s wife, who has been left as Regent.  Mostly the trouble seems to be drunken partying and when the Polovtsian army arrives at the gates the brother, Galitsky, drops dead.  In Act 3 the city has been sacked and everybody is kind of mooning around in the rubble until a pretty depressed Igor shows up and implores the other Russian princes to get off their arses and do something (unspecified).  All the important stuff happens off stage and there really isn’t any resolution.  There is some great music though. 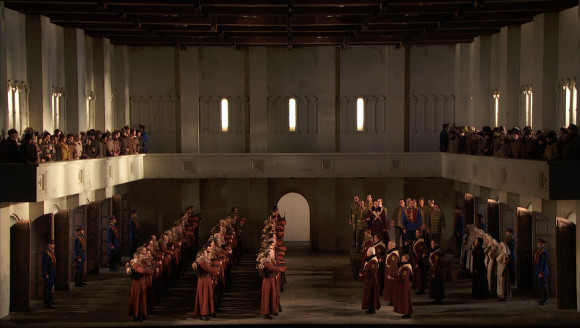 END_OF_DOCUMENT_TOKEN_TO_BE_REPLACED

Verdi’s Il Trovatore really is a peculiar piece.  It’s a bit of a musical hybrid with huge, rousing choruses interspersed with bel canto arias which I suppose is fairly typical of middle period Verdi.  It has a truly silly plot (perhaps based on Blackadder’s lost novel) with gypsies, dead babies and  improbable coincidences galore.  It’s also notoriously hard to cast with five very demanding roles combining a need for flawless bel canto technique with lots of power.  David McVicar’s production at the Metropolitan Opera was broadcast in HD in April 2011 and subsequently released on Blu-ray and DVD.  I saw the HD broadcast and enjoyed it enough to buy the Blu-ray.