Earlier this year the Metropolitan opera staged Borodin’s Prince Igor for the first time in nearly a hundred years with an HD broadcast and a DVD/Blu-ray release to boot.  It’s an odd work.  It’s quite long; a prologue and three acts running over three hours and it’s very episodic.  The prologue takes place in Ptivl; the principality of which I gor is prince.  He’s about to lead his army against the invading Polovtsians.  There are dark omens.  The next thing we see, as Act 1 opens, is that Igor is defeated and a captive of Khan Konchak who’s daughter is now in love with Igor’s son.  It’s all just happened.  Cue lots of exotic Polovtsiania.  In Act 2 we are back in Ptivl where Galitsky is making trouble for his sister, Igor’s wife, who has been left as Regent.  Mostly the trouble seems to be drunken partying and when the Polovtsian army arrives at the gates the brother, Galitsky, drops dead.  In Act 3 the city has been sacked and everybody is kind of mooning around in the rubble until a pretty depressed Igor shows up and implores the other Russian princes to get off their arses and do something (unspecified).  All the important stuff happens off stage and there really isn’t any resolution.  There is some great music though.

It’s a measure of Dmitri Tcherniakov’s genius that he’s created a performing edition and a staging of the piece that has a kind of coherence and is pretty decent theatre.  Mostly he does this through two devices; the use of projections on a scrim at the front of the stage and by staging Act 1 in its entirety as a hallucination of wounded/concussed/PTSD’d Igor.  There are also occasional other uses of what seem to be flash backs.  The black and white projections are quite graphic battlefield scenes and play over cheerful Polovtsian maiden music.  It produces the same kind of cognitive dissonance as the Triumphal March scene does in Tim Albery’s Aida.  The “dream” sequence is placed in the infamous poppy field.  I do find it ironic that so much bitching has been done about the cost of this scene because it’s very beautiful and pivotal to what might just be the best thing created at the Met under Peter Gelb’s tenure.  Projections and poppy field aside the sets are unremarkable nor are the costumes that place the piece in a sort of fantasy early 20th century for no particularly apparent reason.

The Personenregie and performances are wonderful though.  Ildar Abdrazakov and Oksana Dyka are just about ideal as the anguished royal pair.  They sing idiomatically, beautifully, powerfully and with conviction.  It’s impressive.  There are fine contributions too from Anita Rachvelishvili as Khonchakovna and Sergey Semishkur as Vladimir; the young lovers,  Mikhail Petrenko swaggers villainously as the philandering and treacherous Galitsky; a role that rates about a ten on the BF Pinkerton scale.  Stefan Kocan is also rather impressive as the slightly comic book villainy Khan Kolchak.  The comic relief, such as it is, is provided by a slimy pair of gudok players; Skuls and Yaroshka, played here by Vladimir Ognovenko and Andrey Popov.  The piece has lots of big, very Russian, choruses and a fair bit of dance music which all get first class treatment from the Metropolitan Opera orchestra and chorus conducted with fervour by Gianandrea Noseda, who also collaborated with Thcherniakov on the performing edition. 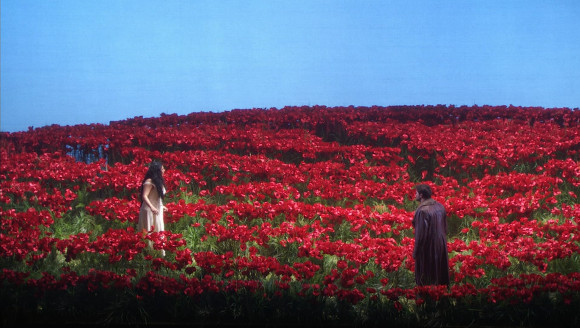 The video direction is by Gary Halvorson and it’s pretty decent.  The scrim doesn’t affect picture quality much and the projections come over fine though it’s not immediately apparent from watching the disk what was actually happening in the theatre.  Sound and video quality are typical of the MetHD releases; excellent though not perhaps the pinnacle of excellence. The booklet includes a synopsis and detailed track listing as well as an essay by David Shengold which bounces between informative and smugly self congratulatory in that annoying Metropolitan Opera manner. The usual intermission extras are included with act introductions by Eric Owens.  Subtitle options are English, German, French, Spanish, Chinese and Korean. 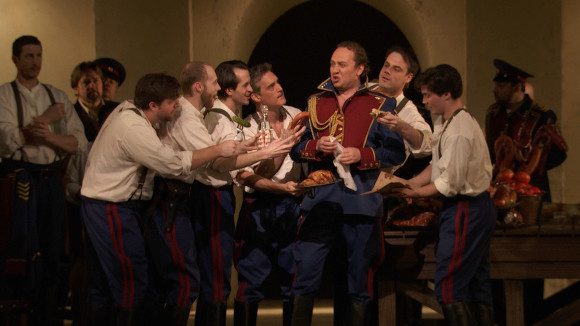 This is likely not a piece you are going to see too often outside Russia so it’s good to have such a fine production and performance captured on disk.