So, back at the Four Seasons centre last night for a second look at Tcherniakov’s production of Don Giovanni, this time from the Third Ring.  I’ve also been thinking and talking a lot about this production both with people who love it and people who don’t.  There’s not a lot of middle ground. 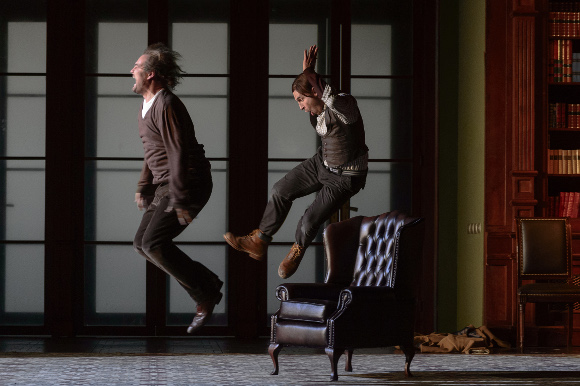 My impressions last night weren’t so very different from opening night.  I was on the look out for a few things and I think I answered a few questions I had after opening night.  Basically I think Act 1 is almost perfect.  Tcherniakov’s take on the characters is unusual for sure but I find it psychologically convincing.  I’ve met these characters which is something I can’t usually say about a Don Giovanni production.  Act 2 has some moments of real psychological insight.  It’s brilliant up to Deh vieni with a psychologically convincing trio between the Don, Leporello and Elvira where nobody is fooling anybody except maybe themselves.  The fibal scene is also extremely effective.  In between I’m not so sure.  The scenes with Don Giovanni and Masetto and the subsequent “lets all beat up Leporello” scene don’t seem as carefully thought through.  I’m not sure this is really Tcherniakov’s fault though.  Da Ponte, after all, is asking us to buy into the idea that by swapping hats and cloaks Don Giovanni and Leporello can persuade people who know them well (very well in the ladies’ case!) that they are each other.  It’s pretty lame unless the whole thing is intended to be played as farce (I’ll discuss that later).  I do think Zerlina singing Vedrai carino to the Don’s coat is near genius though.

In the last few days I’d heard a lot of criticism of the use of the “$time later” curtain between scenes.  It, apparently, drags thing out “interminably” and “stifles applause” for big numbers.  So I timed its appearance.  It comes down seven or eight times (not counting overture and end of act) for periods of 15 to 40 seconds.  That’s shorter than many set changes at COC and much, much shorter than most set changes at the Met.  Looks to me like a case of “haters gonna hate”.

So let’s come back to maybe the most important strand of criticism which can be broadly characterised as “This is Tcherniakov, not Mozart or DaPonte”.  It’s a curious statement in a way because every word and every note come from Mozart and DaPonte and in the order written by them.  So how, exactly, have they been traduced?  The answer, I think we all know, is that there is a received, a “traditional” version of Don Giovanni that is, in a sense, canonical.  This is, I think, true but hugely problematic.  It certainly caused me to go in search of the ur Don Giovanni and ask how, out of that, a canonical traditiobal version got conceptualized.  Unsurprisingly, like most traditions, the origin of the tradition has little to do with the origin myth and is not nearly as old as people think.  (see Hobsbawm and Ranger (ed), The Invention of Tradition, 1983).  My researches were further greatly enlightened by Wayne Gooding’s pre-performance talk at the show last night.  I usually avoid them like the plague but Wayne’s brief tour through the performance history was most enlightening.

But back to the beginning.  The Prague premier of Don Giovanni was sung by very young singers.  The Don Giovanni was 23, the Donna Anna was 24.  It was sung in the roughly 700 seat Estates Theatre in Prague.  So, it cannot have looked or sounded like a modern production in a large house with mid career professional singers.  When the piece was translated to Vienna, Mozart cut and added several numbers.  Most of the adds are used in modern performing editions but the original Prague cuts are restored.  There’s also a scene in the Vienna version that is almost never performed today.  Bottom line, the Don Giovanni one hears today (usually) is one Mozart never heard or imagined hearing.  There’s another thing that has puzzled me for a while.  In our received version Donna Anna and Donna Elvira are clearly the most important female characters.  Donna Anna usually gets the prima donna spot in the curtain call.  Odd then that Zerlina has bigger solo arias than either of them given that modern productions usually cast big stars as the Donnas and an ingenue as Zerlina.  Then one looks at the Prague cast and sees that Zerlina was played by the partner of the impresario mounting the show.  Who’s on first?

When I add up the young singers, the (apparently) enhanced focus on Zerlina and the rather farcical plot elements alluded to earlier and maybe add in the rather obvious borrowings from the commedia dell’arte I imagine those early performances as light, fast paced and probably played mostly for laughs.  It’s an approach that can be made to work as Marshall Pynkoski demonstrated in his 1996 Opera Atelier production, seen many times since in somewhat revised versions.  Pynkoski’s version runs barely two and a half hours compared to three or more for “traditional” versions.  So what happened and when?

Well, it’s a cliché that great works of art contain potential that their creators never knew was there.  I think this is especially true of Mozart’s operas, not least because the music is often of a maturity and emotional depth which transcends the sometimes rather clunky libretti (Die Zauberflöte and La Clemenza di Tito exemplify this every bit as much as Don Giovanni).  This eaves a director with a dilemma; direct to the words or the music?  It’s not definitively resolvable and it’s interesting that the struggle to do so starts very early in the performance history of the piece.  In the German lands, for instance, where until very recently, the work was usually given in the vernacular it was mostly played as a Singspiel, i.e with spoken dialogue that was usually rewritten for each production.  In France, given in French of course, a ballet was customarily inserted with music especially composed for that purpose.  In the English speaking world, pre Surtitles, where the work was usually given in Italian, most of the audience, most of the time had only a hazy idea of what was going on on the stage.  So, for a hundred years or more we see divergent approaches rather than a solid and enduring “tradition”.  The only real element of commonality, based on the surviving evidence, is that a relatively homogeneous costuming style; big hats, swirling capes, hooped skirts and so on did somehow become the norm.

I suspect the idea of a “traditional” version only really came into existence with the emergence of the peripatetic star singer at the beginning of the 20th century.  The great singers of the day often travelled to those parts of the world with a limited exposure to opera with their own costumes for each role, which they performed with minimum rehearsal (and maximum fee!) to the rubes in the sticks.  Reinforced later in the century by a phalanx of jack booted star conductors who cared for little more than the music (and their own egos) we end up with the mid 20th century “park and bark” fossilised product.  It’s interesting that this fairly rapidly became “how it’s always been” but that’s how “tradition” works.

Reintroducing a director with ideas and clout into the equation was bound to shake things up.  There is so much more in Don Giovanni than that received version and dramaturges bringing in approaches from other kinds of theatre were bound to find it and bound to want to stage it.  Equally inevitably some of those ideas work dramtically better than others and it’s entirely legitimate to explore what works and what doesn’t.  What deeply frustrates me though is a mode of criticism, formal and informal, that doesn’t engage with a production as staged but substitutes comparison with the (entirely artificial) received social construct for intelligent interrogation of the work as presented.  By all means let us disagree (more respectfully I would hope than the boors who boo production teams) about the merits of a production but let’s do so based on something a bit deeper than whether it shakes up our preconceptions.

So, let’s try and close the circle on “This is Tcherniakov, not Mozart or DaPonte”.  It’s all three and probably a lot more besides. as are all productions however closely or far from the received social construct they cleave.  The question ultimately isn’t helpful.  Did you enjoy it?  Did it cause you to ask questions about the piece, about people? about yourself?  Did it stimulate interesting discussions?  If it did any or all of these then it’s worthwhile.  I think.