Confluence Concerts opened their season yesterday at 918 Bathurst with a concert featuring a new work by Ian Cusson and André Alexis.  We’ll come to that because before it there was about 45 minutes of music doing what Confluence does; the relatively unexpected.  There were arrangements for various combinations of voices and instruments of songs by the likes of Kate Bush, Coldplay and Neil Young.  There was an instrumental version of Bruce Cockburn’s Pacing the Cage (Larry Beckwith – violin, Andrew Downing – bass) and a Mozart violin sonata (Beckwith and Cusson) plus an intriguing percussion solo by Bevis Ng and more.  It featured the usual suspects; Larry Beckwith, Andrew Downing, Suba Sankaran, Dylan Bell and Patricia O’Callaghan plus Messrs Cusson and Ng and it was fun.

END_OF_DOCUMENT_TOKEN_TO_BE_REPLACED

Last night the Happenstancers presented a short but extremely enjoyable Pierrot themed concert at 918 Bathurst.  The major work, unsurprisingly, was Schoenberg’s melodrama Pierrot lunaire for voice and chamber ensemble.  It was presented in two parts.  The first fourteen poems formed the first half of the programme which closed out with the concluding seven.  It was extremely well done.  Danika Lorèn was an excellent choice as the voice.  She has the technique for Schoenberg’s tricky sprechstimme as well as the innate musicality and sense of drama the piece needs.  The standard “Pierrot ensemble” is perfectly suited for the Happenstancers typically eclectic mixing of instruments.  Here we had Brad Cherwin on clarinets, Rebecca Maranis on flutes, Hee-See Yoon on violin and viola, Sarah Gans on cello and Alexander Malikov on piano.  Simon Rivard conducted.  Skilful playing and well timed interplay between instruments and voice made for a most satisfactory experience. END_OF_DOCUMENT_TOKEN_TO_BE_REPLACED

Last night the Happenstancers presented another intriguing concert of chamber music titled Chimaera.  This time it was in the excellent hall at 918 Bathurst.  It was a clever conceit.  There were three “sets” with each consisting of two contrasting works that were combined in different ways.

The pieces in the first set were played straightforwardly consecutively but consisted of the least familiar music; Julia Wolfe’s Reeling and the premiere of Nahre Sol’s Chunhyang.  Wolfe is one of those young American composers who combine a conservatory training with a taste for minimalism and hard driving rock and, in the case of this piece, folk music.  It’s scored for nine instrumentalists including electric guitar and drum kit plus lots of electronics.  It’s really cool and reminds me of the most drunk ceilidhs I’ve ever been to.  And that may be why I remember almost nothing about the second piece except that the composer (keyboards) was playing it.

END_OF_DOCUMENT_TOKEN_TO_BE_REPLACED

There are a few things I didn’t mention in my back half of April post.  Century Song opened a couple of nights ago at Crow’s Theatre.  It’s a live performance hybrid, inspired in part by Virginia Woolf’s Orlando and Alice Walker’s In Search of Our Mother’s Gardens, Soprano Neema Bickersteth melds classical song (music by Sergei Rachmaninoff, Oliver Messiaen, John Cage, Georges Aperghis and Reza Jacobs) and movement to inhabit a century of women whose identities are contained within a single performer.  Details here.

END_OF_DOCUMENT_TOKEN_TO_BE_REPLACED

Opera 5’s interactive production of Johann Strauss II’s Die Fledermaus opened last night in the Great Hall at 918 Bathurst.  It’s an intriguing but, above all, fun show.  I think it’s fair to say that presented straight Die Fledermaus has more than a few elements of meta-theatricality.  Here it’s central to the plot from MC Pearle Harbour’s initial apology for the lack of a fourth wall because “we can’t afford one” through a whole series of “interventions” by various characters.  Unpacking it all would probably make as much sense as Umberto Eco’s Three Owls on a Chest of Drawers and I’m not as clever as the late Professor Eco and, in best Fledermaus tradition, it’s the morning after and I’ve only had five hours sleep.  So, I’ll avoid the meta and try and describe the show. 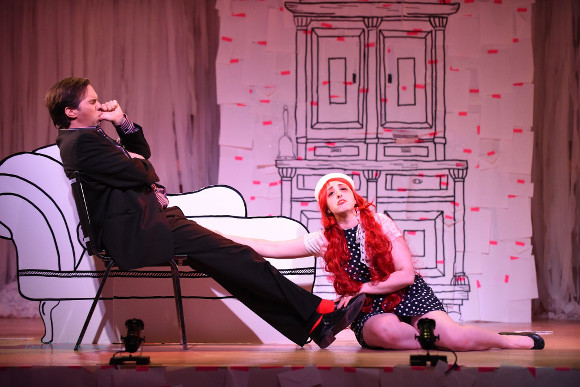