Il ritorno d’Ulisse in Patria is the third of the Ponnelle/Harnoncourt Monteverdi collaborations and perhaps the best.  Itseems to stick closer to the original Zürich staging and be less obviously a film though it was recorded in the studio and lip synched.  The orchestra and conductor are visible and, in Act 3, Irus descends into the pit throws himself all over Harnoncourt.  It’s the conductor too who gives him the knife he kills himself with.  Is this the first (of many) times when Harnoncourt has been drawn into the theatrical action?

END_OF_DOCUMENT_TOKEN_TO_BE_REPLACED

J-P Ponnelle’s 1979 film of Monteverdi’s L’incoronazione di Poppea with Zürich forces conducted by a young Nikolaus Harnoncourt is like his Orfeo only more so.  Sets and costumes are that rather odd “ancient baroque” that Ponnelle is so fond of.  The acting is stylized and hyperkinetic and so is the camera work with close ups from weird angles all over the place.  So far, so Ponnelle.

END_OF_DOCUMENT_TOKEN_TO_BE_REPLACED

Monteverdi’s L’Orfeo is one of the few 17th works still in the canonical opera repertoire though little performed before the “early music revival”.  So it was quite a bold step when the Opernhaus Zürich in the 1970s staged all three extant Monteverdi operas in productions by J-P ponelle and with Nikolaus Harnoncourt leading an orchestra of period instruments.  All three productions were subsequently made into lip-synched films and have been re-released on DVD by Deutsche Grammophon as a boxed set.

END_OF_DOCUMENT_TOKEN_TO_BE_REPLACED 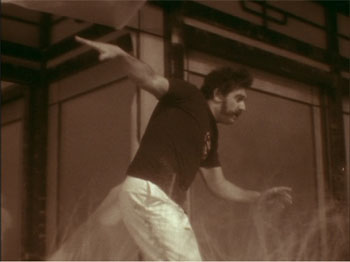 Continuing the Jean-Pierre Ponnelle marathon we come to his 1974 film of Puccini’s Madama Butterfly with Mirella Freni in the title role and a young Placido Domingo as Pinkerton.  Musically this is the most satisfying of the Ponelle productions I’ve yet come across.  Freni is superb.  Radiant is not too strong a term,  Domingo sings pretty much as well (we’ll come to points of dramatic interpretation later) and the supporting cast is flawless.  There’s some serious luxury casting here with Christa Ludwig as a superb Suzuki.  Robert Kerns is an excellent Sharpless and Michel Sénéchal equally good as Goro.  Herbert von Karajan conducts.  He tends to go for sheer beauty of sound rather than maximum drama but what beauty of sound!  The soloists are wonderfully backed up by the Wirner Philharmoniker and the Staatsopernchor.  END_OF_DOCUMENT_TOKEN_TO_BE_REPLACED

So following on from Jean-Pierre Ponelle’s last film we now turn to one of his earliest, a 1972 version of Rossini’s Il barbieri di Siviglia.  It’s based on his production for La Scala but is, as usual with Ponelle, studio recorded and shot in the studio with lip synching.  It’s not an especially interesting production but it does have a starry cast including Hermann Prey in the title role.  END_OF_DOCUMENT_TOKEN_TO_BE_REPLACED

In 1988 Jean-Pierre Ponnelle made the last of his lip synched opera films; Mozart’s Così fan tutte.  It carries Ponnelle’s trademark “artificiality” even further than in other of his films that I have seen.  The sets, the costumes, the acting and the camera work never let us forget that this is a work of the, in the director’s words, “greatest artificiality”.  It also becomes increasingly clear as the piece progresses that Ponnelle has a very clear idea of what “the opera is about”.  END_OF_DOCUMENT_TOKEN_TO_BE_REPLACED

There’s been a fair amount of discussion of Jean-Pierre Ponnelle’s film version of Mozart’s La Clemenza di Tito over at The Earworm so I thought it would be a good time to dig out his La Scala production of Rossini’s La Cenerentola.  They have a lot in common; an obsession with statuary and heavy focus on verticality that makes the picture often seem taller than it is wide are just two.  The Rossini, despite being filmed at La Scala is very filmic.  It’s much more like a movie than a video recording of a staged performance.  END_OF_DOCUMENT_TOKEN_TO_BE_REPLACED