So following on from Jean-Pierre Ponelle’s last film we now turn to one of his earliest, a 1972 version of Rossini’s Il barbieri di Siviglia.  It’s based on his production for La Scala but is, as usual with Ponelle, studio recorded and shot in the studio with lip synching.  It’s not an especially interesting production but it does have a starry cast including Hermann Prey in the title role. 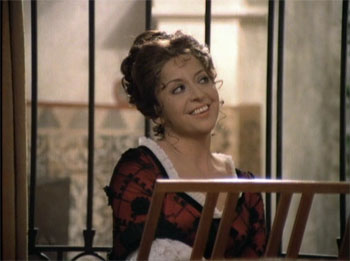 The setting is, quite straightforwardly, 18th century Seville.  Sets and costumes cleave closely to that idea though a rather cartoonish portrait of Bartolo and Rosina’s hemlines are decidely anachronistic.  The production too is quite straightforward  though rather a lot of “business” is added which, coupled with the make up for Bartolo and Basilio gives the whole thing a rather cartoonish air.  This is reinforced by Ponnelle’s characteristic direction with lots of playing straight to the camera.  I didn’t find the production especially interesting or insightful. 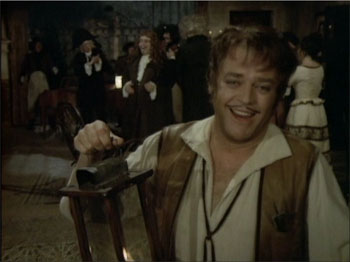 The performances are very good, if not especially idiomatic.  Prey is a smiling, bouncy Figaro who sings accurately but doesn’t sound terribly Italian.  Luigi Alva, on the other hand, is a very Italian sounding Almaviva.  I enjoyed his singing but many, I think, will find his old fashioned ornamentation a bit heavy handed.  Teresa Berganza is a very photogenic Rosina who plays the part more as flirt than minx. One really sees this in una voce poco fa which is not very ironic, in fact rather sweet.  Maybe, also, she’s on the mature side for Rosina but less obviously so than María Bayo on the Madrid recording.  Enzo Dara’s Bartolo and Paolo Montarsolo’s Basilio are clowned up to suit Ponnelle’s direction but sing well enough.  Claudio Abbado conducts idiomatically and the La Scala orchestra and chorus are perfectly adequate.

The technical aspects of this disk are a bit problematic.  It’s obviously filmed, not videorecorded, so at least we don’t have 1970s standard video to worry about but the transfer of the 4:3 picture to DVD isn’t perfect, especially in the darker scenes which are quite flickery.  The sound is even more problematic.  I started listening to the DTS 5.1 track (ANSI II synthesized from stereo) and it was dry and hollow.  I switched to the PCM stereo, which was better but only just.  The dynamic range is extreme and, while some of that is natural, some of it appears just to be random volume drops.  The orchestra/singer balance changes several times too for no apparent reason.  There are English, French, German, Italian, Spanish and Chinese subtitles.  The only bonus material is trailers for some other DGG disks of the era including a hilarious looking Madama Butterfly featuring Placido Domingo in an outrageous moustache and a weirdly dated looking Carmen with Grace Bumbry and Jon Vickers.

There are much better recordings of this work out there so this one is of strictly historic interest.