It’s hard to think of a play that would make a better basis for an opera libretto than Edmond Rostand’s Cyrano de Bergerac.  Henri Cain’s adaptation is rather good; somewhat simplifying and tightening up the plot in a similar manner to that later taken by Britten and Pears with A Midsummer Night’s Dream. It’s a shame Franco Alfano’s music doesn’t really rise to the same heights.  It has its moments, especially later in the opera, but much of the time it’s dull and impressionistic; more like a film soundtrack than an opera score.  I guess the lesson is that one just can’t do verismo while trying to avoid vulgarity and excessive melodrama.  It also has to be said that much of the time the music seems to be fighting the natural rhythm of the words rather than supporting it.  What the music does have is Alfano’s trademark torturing of his singers, especially the principal four roles of Cyrano, Roxane, Christian and De Guiche. 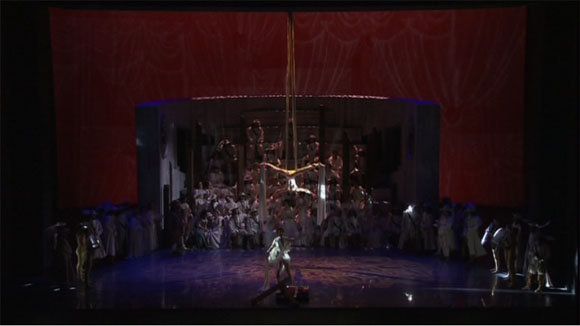 Michael Znaniecki’s 2007 Valencia production is fairly straightforward.  Costumes are period appropriate and sets are mildly abstracted but not radical.  A revolving circular thing forms a unifying element serving by turns as theatre, balcony, ramparts and convent.  The only odd element is the introduction of an aerialist into the opening theatre scene and the battle at Arras.  Aerialists seem to be the new black.  They featured prominently in two of last season’s COC productions and, apparently, have a part in the new ROH Les Troyens.  In any event the story is strong and Znaniecki’s direction gets that story told effectively enough.

Of the principals, three are really good.  Placido Domingo, sporting an even larger nose than usual, is predictably excellent in the huge and difficult title role.  Sondra Radvanovsky similarly masters the tricky role of Roxane and sings both loudly and with lovely tone.  No mean feat.  Her je lisais, where she is explaining to Christian that she would love him even if he were ugly, is gorgeous.  The ever dependable Rod Gilfry is a solid and characterful De Guiche.  The weak link is the Christian of Arturo Chacón Cruz.  It’s an attractive idea to cast a youngish singer in the role but he seems a couple of sizes too small for the music and sounds decidedly over strained.  There are good supporting contributions from Javier Franco as Carbon and Corrado Carmelo Caruso as Ragueneau.  The Valencia orchestra and chorus are really rather good and conductor Patrick Fournillier makes the most of the more dramatic parts of the score.  I don’t think it’s his fault where the music gets a bit draggy. 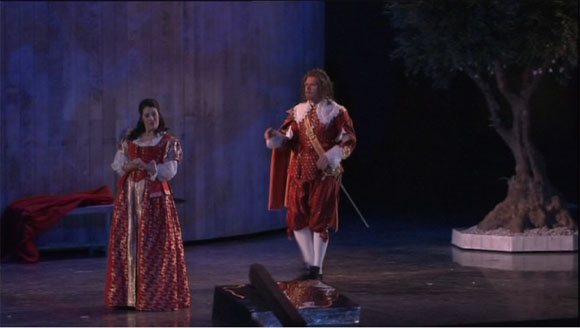 Technically this is a pretty good recording.  It’s also available in 1080i Blu-ray so, obviously it was recorded in HD and the DVD picture reflects it.  So does the video direction of Tiziano Mancini who often chooses to give us the big picture, at which point even top notch DVD picture quality is pushed.  When he’s not showing long shots Mancin has a tendency to get a bit cute with dissolves and superpositions.  He also produces black and white flashbacks during the Act 4 prelude (at least they didn’t look like they were projected in the theatre.)  The DTS 5.1 sound is vivid and realistic and very welcome after to listening to several older recordings recently.  The options are Dolby 2.0 and 5.1.  The Blu-ray has DTS HD 5.1 and PCM stereo.  There are English and french subtitles.  I got sufficiently annoyed with the weird English translation that I switched to the French.  The booklet has cast bios, track listing, synopsis and an essay on Alfano.  There are no video extras which i think is always a pity with a relatively unfamiliar work. 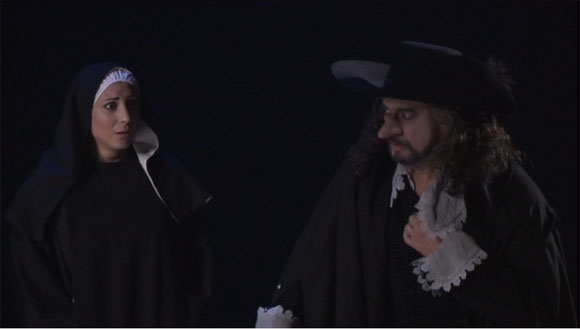 This is worth a watch on its own merits and as one of the comparatively few post Puccini Italian operas in the repertoire but I’d definitely go for the Blu-ray.

5 thoughts on “Alfano’s Cyrano with Domingo and Radvanovsky”