There were a few technical glitches with the first episode of Arts Anyway so if you went looking for it last night you were likely out of luck.  It’s up now on YouTube though on channel Arts Anyway though you may have to check under “playlists” to find the video.

END_OF_DOCUMENT_TOKEN_TO_BE_REPLACED

Last night, at the Ernest Balmer Studio, we got to see somewhat more developed versions of the works presented earlier in the week in the RBA but this time in staged format.  I’m not sure my opinions changed much as a result though I think I’m even more convinced that here we have five pieces of substance that deserve to be seen in fully realised form.  So, some brief thoughts on each.  Note that, except for Book of Faces we only saw extracts from pieces that are still WIP. END_OF_DOCUMENT_TOKEN_TO_BE_REPLACED

Wednesday evening saw the last Whose Opera is it Anyway? of the year in the new digs at Bad Dog Comedy Club.  Last month’s line up of singers; Rachel Krehm, Michael York, Gillian Grossman and Amanda Kogan, were joined by Adanya Dunn and an elf.  Natasha Fransblow was at the keyboard again.  Greg Finney; the thinking man’s Don Cherry, MC’d.  The format was as ever; a line up of improv games with audience input.  Highlights included the Three Minute Messiah, Adanya giving her mum a dildo and the deep, dark depths of Keith Lam’s Instagram account.  And beer.  And Greg’s suit.

The news is that LooseTEA now has a regular slot for WOIIA.  In the new year you will be able to catch them at Bad Dog on the third Sunday of the month at 9.30pm.  It’s a better venue than the old place and it’s a fun way to spend an hour and a half or so. 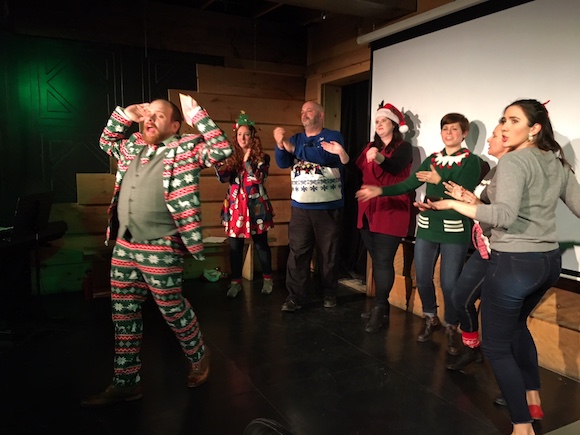 Last night’s Whose Opera is it Anyway? from LooseTEA Theatre featured Alana Viau MCing, Natasha Fransblow on keyboards, Rachel Krehm, Michael York, Gillian Grossman and Amanda Kogan improvving and a thirteen year old kid called Alex (or possibly Alice) stealing the show.  The format was the usual.  Games where the audience supplies some key element e.g. a place – a launderette and designated cast members turn it into a sketch.  Best of the night I think was the “breakfast food” sketch with Michael and Amanda which went from a surprisingly filthy “left over pizza” to “left over pizza backwards” to “left over pizza in the Dark Ages”, mostly in Pig Latin.  There was also a very creepy “execution” sketch where Rachel gleefully cut body parts off a recumbent Michael.  Do not upset this chick!

There was lots more and of course it’s very silly.  That’s the point!  But it’s good fun and worth a look.  The next edition is at Bad Dog Theatre at 8pm on December 20th.

Whose opera is it anyways?! is a comedy-improv-opera show from LooseTEA Theatre’s Alaina Viau.  Last night saw the second in what is being projected as a monthly series at the Comedy Bar on Bloor West.  So how does it work?  The “games” and associated players are decided in advance but each usually requires some kind of audience input such as a place or a mood or even the messages on someone’s phone.  The team then act out and sing a sketch on the prescribed lines.  Natasha Fransblow provided accompaniment on keyboards, though how much of that was planned and how much improvised I couldn’t tell.  In between numbers Jonathan McArthur MC’d accompanied by really obnoxiously loud pop music (not helped by the speaker basically being in my left ear).

END_OF_DOCUMENT_TOKEN_TO_BE_REPLACED

Even by the standards of Rossini comedies The Italian Girl in Algiers is a bit daft.  Mustafà, bey of Algiers, is tired of his wife and plans to get rid of her by marrying her off to his Italian servant Lindoro.  He wants an Italian girl because well squire, nudge nudge.  He instructs his sidekick and commander of the galleys Haly to procure one or be impaled (a somewhat pointed joke that runs through the piece).  He shows up with Isabella and her sidekick Taddeo.  Isabella just happens to be Lindoro’s squeeze.  She immediately starts to plot their escape and persuades Mustafà that to succeed with Italian girls he must become a Pappatacci which involves eating enormous amounts of food and not getting upset when his beloved gets off with other men.  With Mustafà in a pasta induced near coma the lovers escape and Mustafà reconciles with his wife.  Got that? 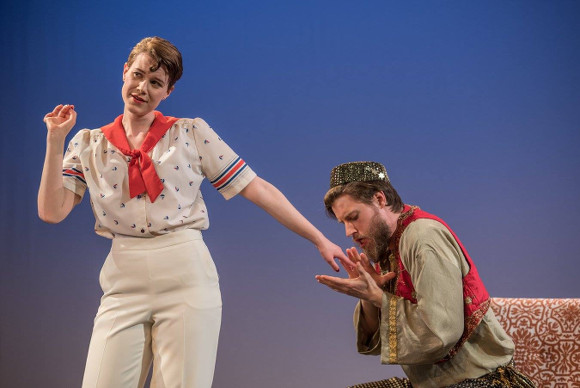 END_OF_DOCUMENT_TOKEN_TO_BE_REPLACED

Last night LooseTEA Theatre presented a work-in-progress version of their reimagined Carmen.  Director and librettist Alaina Viau promised a “a radically envisioned” Carmen and she wasn’t kidding.  Apart from the fact that Ricardo (Escamilio) and John Anderson (Don José) are rivals for Carmen’s affections and there’s a woman, Michaela, with a prior attachment to John and, of course, that John kills Carmen there’s not a whole lot left of Mérimée’s story.  We are in Toronto.  John is a vet suffering from PTSD who has left his wife (Michaela) and kids.  Carmen manages a bar but is about to open her own place with the help of investment banker Ricardo.  She comes across as an everyday working girl rather than someone whose life is a serial process of picking up and discarding men.  Episodes that fit the big numbers of the score are quite cleverly crafted together to weave a narrative that works but rather relies on John’s PTSD to explain the two murders.  Woven into the opera are videos by Darren Bryant that contain some of the characters’ back stories.  Music is a mix of a conventional keyboard reduction played by Natasha Fransblow and live electronics from sound artist SlowPitchSound.  The use of electronics brings a grittiness that feels like an essential way of undermining the “prettiness” of the score.  Running around 55 minutes all told it feels a bit episodic and I hope (and expect) that the final version will seem more continuous.  Certainly there’s already more than just the basis for a very interesting piece of music theatre.

END_OF_DOCUMENT_TOKEN_TO_BE_REPLACED

Anna Theodosakis’ production of Britten’s Rape of Lucretia for MYOpera updates the piece from proto-historical Rome to somewhere in the mid 20th century which is fine but doesn’t seem, of itself, to add any layers of meaning to the narrative.  There are neat visual touches in a simple but effective set design and the nature of and relationships between the characters are deftly drawn.  The rape scene manages to be disturbing without being gratuitously graphic.  It’s skilful theatre.  But is that enough? 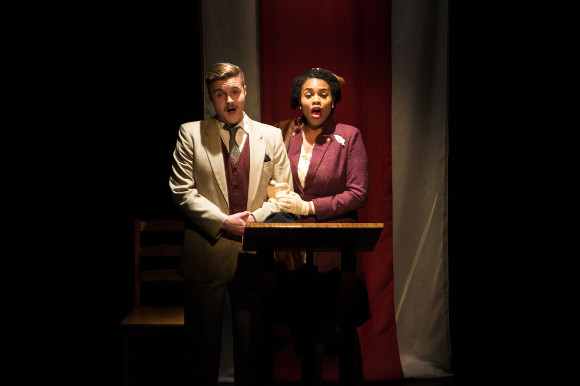 END_OF_DOCUMENT_TOKEN_TO_BE_REPLACED

This concert was the culmination of several days of workshops involving Wallis Giunta, Jordan de Souza and eighteen emerging artists; both singers and pianists.  It’s a comparatively unusual opportunity to focus on contemporary repertoire for a while and the results were fun.  As usual with these multi-participant efforts I’m not going to attempt to be exhaustive but just concentrate on my personal highlights.

END_OF_DOCUMENT_TOKEN_TO_BE_REPLACED

Two announcements from MY Opera at their fundraiser yesterday.  First, they have rebranded from Metro Youth Opera to MY Opera.  I guess everybody is getting a little older!  More exciting, their spring 2016 production will be Britten’s The Rape of Lucretia which is a definite departure into much darker territory for this company and a chance to see a work that isn’t performed too often.  Dates and casting TBA.

The fundraiser itself was fun with some fine singing from, among others, Stephanie Tritchew, Lyndsay Promane, Asitha Tennekoon and Kelsey Vicary with Natasha Fransblow on keyboards.  There was beer and silly hats and a vast quantity of rather good chicken wings.  There was also a raffle and a photo booth thingy.  And did I remember to mention the chicken wings.