The Salzburg Festival rarely does operetta but in 2019 they decided to commemorate the 200th anniversary of Offenbach’s birth with a new production of Orphée aux enfers by Barrie Kosky.  With Kosky and comedy one sort of knows what to expect but there’s always something very original.  Here, in order to get the (German) dialogue as crisp as possible he takes it away from the singers and gives it to a new character; John Styx, played by actor Max Hopp, who not only speaks all the dialogue in an amazingly wide range of voices but also produces all the sound effects.  The only other character who speaks is Anne Sofie von Otter as L’Opinion publique and even she is doubled by Hopp.  Not that the singers have nothing to do during the dialogues.  They pantomime their words, often in quite an exaggerated fashion and to great effect. 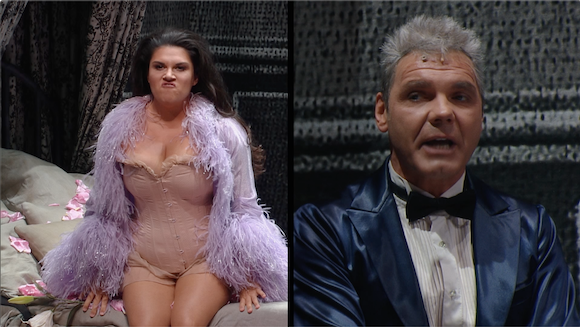