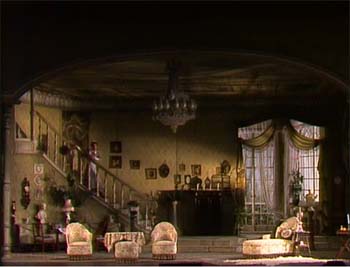 The production is typical Schenk. It’s very opulent; big on stuff, short on ideas. It would go down well at the Met. The only real interpolation is incorporating the Donner und Blitzen polka as a ballet number in Act 2 (which turns into something really a bit bizarre that looks like it might have happened at the Drones’ Club dinner dance) and the updating of a few of Frosch’s gags in Act 3. The transition from ballroom to dining room is carried out by means of a rotating stage, to the applause of a rather easily pleased audience. There’s really nothing much else to say about it. 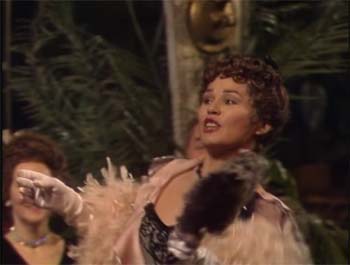 Musically this performance is very high quality and much more operatic than the other production. The quality is apparent from the first few bars of the overture where Kleiber’s command of this material and his ability to inspire the orchestra is very clear. He’s backed up by a pretty heavy duty singing cast. Eberhard Wächter is Eisenstein, Benno Kusche is Frank and Pamela Coburn is Rosalinde which is pretty heavy duty casting and very effective. Even the roles which might get more operetta type voices are quite heavily cast. Adele, for instance, is sung by Janet Perry who seems to have a biggish voice for the role though she floats lightly enough through the coloratura passages. Similarly the Alfred of Josef Hopferweiser and the Falke of Wolfgang Brendel are full on operatic voices. Orlofsky is cast to a mezzo, Brigitte Fassbaender, and her voice suits the music much better than a counter-tenor’s does. So, solidly good singing across the piece and it’s backed up by good acting. Frosch, here is played by German TV actor Franz Muxeneder and he’s actually quite funny and not too over the top. So, all in all, a satisfying traditional performance which is pretty much what I was after. 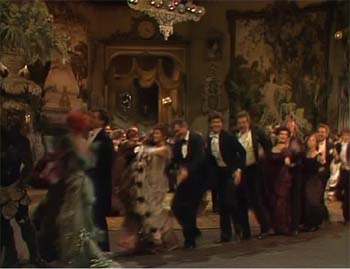 The DVD isn’t so great in many ways. The sound is good. I listened using the DTS 5.1 track which is a remix using DG’s AMSI II technology of the original stereo recording. It’s very vivid and quite spacious. There are also Dolby 5.1 and PCM stereo options. The 4:3 picture is typical of 1980s TV recordings. It’s very soft grained and lacks definition. There are English, French, German and Chinese subtitles and a bilingual French/English booklet with a synopsis, cast listing and chapter listing. The only extra is a trailer focussed on Carlos Kleiber. 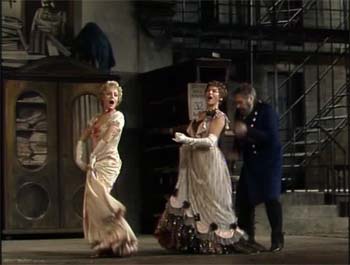 The main problem with the disk is the video direction. It’s the work of Brian Large whose quirks seem to be exacerbated by the Schenk approach. Schenk puts lots of “stuff” on stage; tons of furniture, chorus, dancers and supers all over the place and then Large focusses in on a head shot or an upper body shot which, inevitably, has all sorts of distracting background whirling in and out of shot. He also does something I’ve never seen before; he films the conductor while there is singing going on on stage. I know appearances by Kleiber were pretty rare but that’s just ridiculous.

I really must contrive to get hold of the recent Glyndebourne version of this work. It sounds like it should be much better.