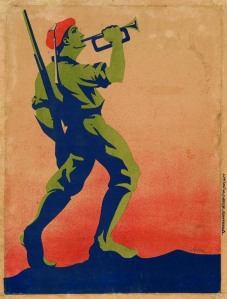 It’s funny how one can see a work many times but miss what may or may not be an important detail. I just watched the first act of Carmen for the umpty-umpth time and heard something the significance of which had never struck me before.  There’s an exchange between Zuniga and José quite early on that goes roughly as follows:

Are we being told that José is a Carlist; for what else could a Navarrese of respectable peasant stock who draws attention to his religion be in such an era?  Is so, what are we to make of it?  Is this an additional deliberate signifier of the gulf between respectable, pious, legitimist José and bohemian, pagan, anarchist Carmen?

Or am I just making a sierra out of a molehill or stating the blindingly obvious?  Whatever I find it odd that I missed that detail on all previous watchings.