The Salzburg Festival rarely does operetta but in 2019 they decided to commemorate the 200th anniversary of Offenbach’s birth with a new production of Orphée aux enfers by Barrie Kosky.  With Kosky and comedy one sort of knows what to expect but there’s always something very original.  Here, in order to get the (German) dialogue as crisp as possible he takes it away from the singers and gives it to a new character; John Styx, played by actor Max Hopp, who not only speaks all the dialogue in an amazingly wide range of voices but also produces all the sound effects.  The only other character who speaks is Anne Sofie von Otter as L’Opinion publique and even she is doubled by Hopp.  Not that the singers have nothing to do during the dialogues.  They pantomime their words, often in quite an exaggerated fashion and to great effect.

The rest of the production is also quite striking.  It’s set in a sort of surreal fantasy 19th century.  It’s colourful, action packed and often quite raunchy.  The choreography by Otto Pichler is brilliant and there are lots of excellent humorous little touches.  Above all, it’s very funny indeed and just lots of fun though judging by some ill mannered booing during Kosky’s curtain call that view is not exactly unanimous.

There are some really good performances too.  Perhaps the best is Martin Winkler’s Jupiter.  He sings well enough (in French) but it’s his astonishingly plastic face and brilliant physical acting that really catch the eye.  Kathryn Lewek, as Euridice, is also obviously having a great time.  She can sing prettily and has awesome top notes when required but often she’s really camping up the vocal acting with some very strange sounds indeed and her physical acting is, let us say, exuberant, especially in the raunchier scenes.  Marcel Beekman, as Pluton, also gets plenty to do and does it well.  The dancers are fantastic and the chorus from Vocalconsort Berlin seem really into the action as do the rest of the soloists.  I think that among Kosky’s strengths are his sense of comic timing and his ability to get a cast to commit wholeheartedly to what he is after.  Both qualities are well displayed here.  The orchestra is the Vienna Philharmonic with Enrique Mazzola conducting.  I don’t know how often they play Offenbach but they sound entirely at home.

Video direction is by Michael Beyer.  He has a tough job to do because, although the stage is fairly small (it’s the Haus für Mozart) there’s a lot going on but one really wants to see the facial expressions.  This is especially true during the dialogues where one often wants to be in close on both the singer and Hopp.  Beyer obliges!  Normally I hate split screening but here it feels like the right solution.  All in all I think the video is a good representation of Kosky’s concept.

Technical quality on Blu-ray is excellent.  The picture is top notch and the surround sound is vivid and clear (stereo also available).  There are no extras apart from some trailers but there’s a good essay by Kosky in the booklet along with a synopsis and track listing.  Subtitle options are English, French, German, Korean and Japanese. 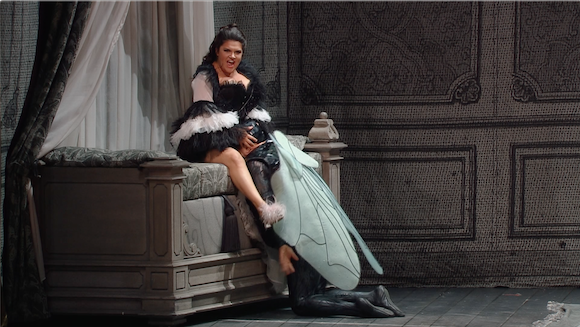 This is the only modern video recording of Orphée aux enfers.  The other options are a 1980s Götz Friedrich version and the brilliant but technically dated Lyon version directed by Laurent Pelly with Natalie Dessay and Laurent Naouri.  I’m not sure that that version is still available but, even if it is, this new version gives it a run for the money as a performance as well as being technically in a different class.