So last night’s Venice to Constantinople web cast didn’t come off due to the general inability of people to get together right now.  However Beste Kalender and Ryan Harper did manage to produce a short video.  You can see Beste singing a piano accompanied version of  Hahn’s À Chloris followed by three songs by Komitas recorded by Beste with Sinfonia Toronto and Nurhan Arman.  The three songs are Cinar Es (Tall as a poplar tree), Tahsin Incirci (Varna Songs) and Al Ayloughs (My Red Shawl).  It’s a nice way to spend fifteen minutes.  The video can be found here. 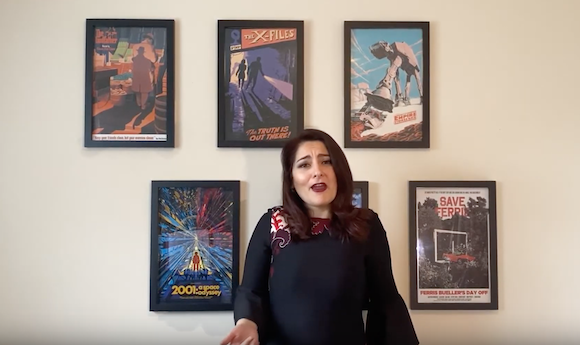 This year’s Canadian Art Song Project commission is a setting of poems by EJ Pratt by Dean Burry entitled Sea Variations.  It was given its first performance yesterday in the Richard Bradshaw Amphitheatre by Michael Colvin and Stephen Philcox.  The texts all deal with the moods of the sea and seem curiously archaic for the 1920s when they were written.  They are much more reminiscent of, say, Matthew Arnold than Yeats, let alone Eliot.  They have a certain power though and anybody who knows the North Atlantic will easily appreciate why they might appeal to fellow Newfoundlander Burry.

END_OF_DOCUMENT_TOKEN_TO_BE_REPLACED

Last night’s early evening free “shuffle” concert at Heliconian Hall featured Krisztina Szabó and Stephen Philcox.  They started out with Xavier Montsalvatge’s Cinco canciones negras; a lively collection of Spanish songs featuring scenes from Cuban life.  The songs, very much French influenced, varied in mood from quite sombre to wild and were presented with skill and wit.  The main event though was the reprise of two works that Philcox and Szabó premiered in March at Walter Hall; Miss Carr in Seven Scenes by Jeffrey Ryan and Four Short Songs by John Beckwith.  I reviewed that March performance here and really don’t see any reason to revise my opinion about the works or the performances except to note that last night, of course, Krisztina sang all the Beckwith songs.

Last night, at Walter Hall, the Canadian Art Song Project presented their latest commission; Miss Carr in Seven Scenes by Jeffrey Ryan.  The overall standard of the CASP commissions since Lawrence Wiliford and Steven Philcox launched the endeavour has been very high.  The Ryan piece maintains that. 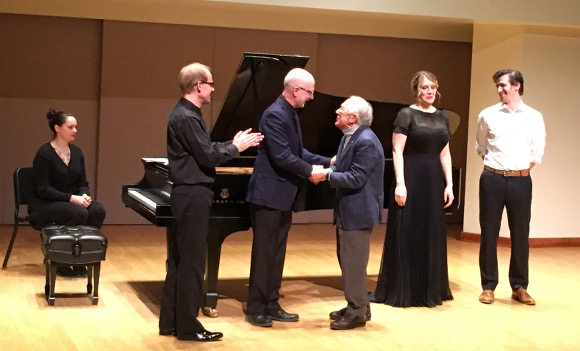 END_OF_DOCUMENT_TOKEN_TO_BE_REPLACED

Last night’s TSO program started off with a sort of Remembrance Day pot pourri; pipes, bugles, a bit of poetry, an excerpt of Vaughan Williams in between and finally a rather beautiful account of The Lark Ascending with Jonathan Crow playing the solo from high up in the Gallery.  Once upon a time the TSO would do Remembrance Day by performing an appropriate work or works, Britten’s War Requiem for example.  I think that might actually be a more effective way of remembering.

END_OF_DOCUMENT_TOKEN_TO_BE_REPLACED 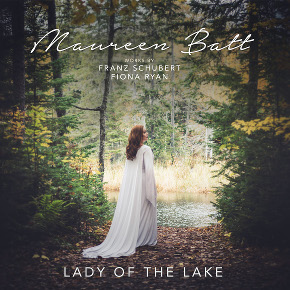 This is an interesting CD.  It couples the rather rarely performed Schubert cycle to texts by Sir Walter Scott with a new Fiona Ryan cycle on the same theme.  The reason the Schubert is a bit of a rarity is that, besides high and low voice and piano, one number requires a female chorus and another a TTBB quartet.  In fact here those two pieces were recorded separately in different locations but I don’t think it’s apparent listening to the disc.  The Schubert also includes the well known Ave Maria, the sixth song in the cycle, given here in the German originally used by Schubert rather than the Latin version usually heard.  It’s a very decent performance.  Maureen Batt is the soprano (and the evil genius behind the whole enterprise).  Her voice is light and clear and her diction is excellent.  Even a piece like the Ave Maria sounds fresh.  Jon-Paul Décosse is the baritone.  It’s a firm, confident voice, again with every word clearly audible.  Simon Docking provides excellent accompaniment.  The Bootgesang is performed by Leander Mendoza and Justin Simard; tenors with Robert O’Quinn and James Levesque; baritones, again with Docking at the piano.  This might be the most fun piece of the cycle.  For the elegiac Coronach we get The Halifax Camerata Singers conducted by Jeff Joudrey with Lynette Wahlstrom at the piano.  They sound very pleasant.

END_OF_DOCUMENT_TOKEN_TO_BE_REPLACED

The Toronto production of Against the Grain’s A Little Too Cozy opened last night at Studio 42 at the CBC Centre.  It’s the third and final instalment in the series of Ivany/Mokzrewski adaptations of the Mozart/da Ponte operas, following on from Figaro’s Wedding and #UncleJohn.  Like the earlier pieces it’s updated, site specific and makes a lot of references to social media.  The schtick here is that it’s a reality TV dating show.  Dora and Felicity are yet to meet Elmo and Fernando in the flesh though they have become engaged via social media and through the prior episodes of the show.  Tonight is the season finale and there is one big test left.  Can they be tempted by two strange men?  Show host Donald L. Fonzo and girl handler Despina will make sure they are maximally tempted.  The rest you can work out. 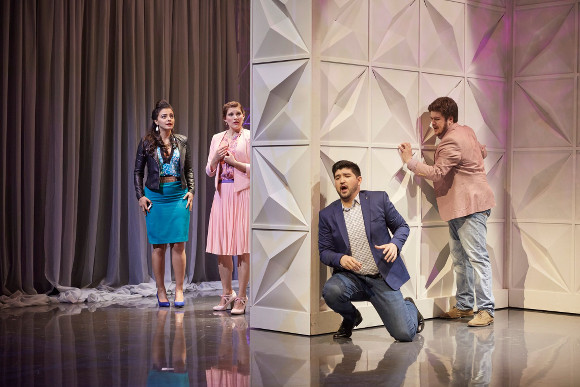