Jake Heggie’s Moby Dick has been successful in a way few contemporary operas are.  Since its Dallas premiere in 2010 it has been given in Adelaide, Calgary, San Diego and, most recently, San Francisco where it was recorded in 2012.  It’s not hard to see why it has been a success.  The subject is dramatic and has been skilfully compressed into a little over two hours by librettist Gene Scheer and the score steers the fine line between accessibility and triviality.  Add to that a visually appealing production and it’s a winning package.

END_OF_DOCUMENT_TOKEN_TO_BE_REPLACED

A while back I reviewed the train wreck that is the CBC recording of Joan Sutherland in Norma. Three years later the Canadian Opera Company and the CBC tried again with a recording of Donizetti’s Anna Bolena. As a recording and a production it has its limitations but it’s not a disaster and is enjoyable in many ways. 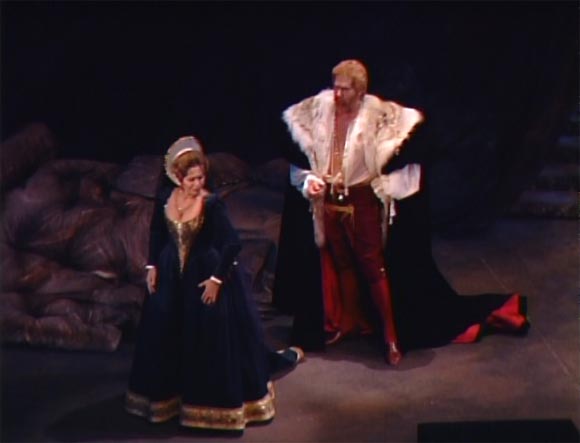 END_OF_DOCUMENT_TOKEN_TO_BE_REPLACED

I’ve watched John Adams’ Doctor Atomic three times now. The first time; a MetHD broadcast, I wasn’t impressed at all.  The second time; an AVI rip of the Dutch television broadcast, I started to come around.  Having now watched the Opus Arte DVD based on the Dutch TV broadcasts I’m converted.  This piece is every bit as good as Nixon in China and probably surpasses it in emotional impact due to the more visceral nature of the material.  The orchestral writing is classic Adams.  The musical argument is swept along on a strong rhythmic pulse and overlapping waves of colour.  In contrast the vocal line often seems duller though there are passages of great lyricism, notably Oppenheimer’s big Act 1 aria Batter my heart, three personed God.  Kitty Oppenheimer and the native woman, Pasqualita, also get some good singing.  I also found myself warming to the libretto.  Some rather self conscious passages of Donne and Baudelaire aside, it lacks the poetry of Goodman’s libretti for Adams but Peter Sellars’ selection of words taken from the documentary record is, in its way, quite compelling; reflecting the mix of high and banal concerns that people under great tension express.  It’s particularly interesting to see the relatively high level of respect for and confidence in the moral judgement of politicians displayed by the scientists.  One doubts whether that would be the case today.  In total, it’s a strong additiion to the repertoire of 21st century operas.