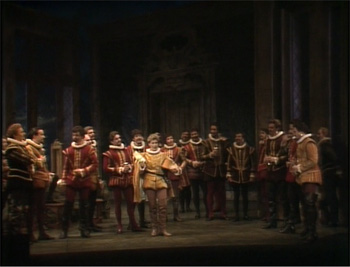 It’s 1990 and Dame Joan Sutherland is retiring.  Australian Opera decide to stage Meyerbeer’s Les Huguenots as a farewell gala.  In some ways it’s an odd choice as the Sutherland character, Marguerite de Valois, only appears in two of the five acts of an opera that’s rather long despite cuts.  Still, as a vehicle for an ageing coloratura it’s not a bad choice.  The production is by Lotfi Mansouri so there is nothing to get in the way of the plot and, by the same token, nothing much to think about.  It’s also, equally characteristically, quite dark in places.  Everything then rests on the performances.  END_OF_DOCUMENT_TOKEN_TO_BE_REPLACED

A while back I reviewed the train wreck that is the CBC recording of Joan Sutherland in Norma. Three years later the Canadian Opera Company and the CBC tried again with a recording of Donizetti’s Anna Bolena. As a recording and a production it has its limitations but it’s not a disaster and is enjoyable in many ways.

END_OF_DOCUMENT_TOKEN_TO_BE_REPLACED

It’s a pet peeve of mine that, alone among state funded TV broadcasters in the industrialised world, CBC doesn’t broadcast opera on TV. There are many other reasons why the CBC is a national embarrassment but this one rankles. That said, there have been a couple of CBC broadcasts over the years and they did make it to DVD. These include a 1981 Canadian Opera Company performance of Bellini’s Norma with Joan Sutherland. It’s a great big pile of steaming whale dreck. The production, by Lotfi Mansouri, looks more like it was done in 1881. The Gauls have helmets with horns on. Sutherland seems to be dressed as the Statue of Liberty and the tenor playing Pollione (Francisco Ortiz) looks like Stephen Fry as the Roman centurion in Black Adder Back and Forth. Add to that it’s pretty much park and bark as far as blocking goes. 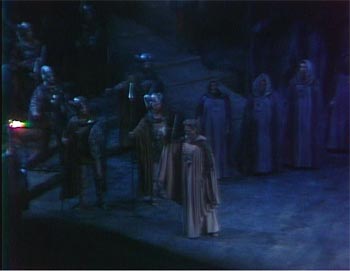 Sutherland is on poor form. She has no lower register to speak of and she gets about as much drama out of the music as a doorpost. Whether her powers were in serious decline at this point or she was just having an off night I can’t tell but it’s pretty sad. Ortiz is dreadful. He’s often below the note and seems to be using every trick in the tenor playbook to approximate his music. Bonynge’s conducting is deadly dull. The only part of the music making worthy of note is Tatiana Troyanos as Adalgisa. She’s very good indeed. 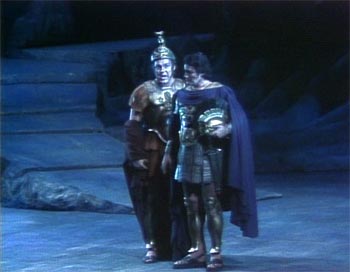 Technically the DVD is at least as bad as the performance. It’s recorded in mono (mono, in 1981!) and the sound is muddy and badly balanced. At some points the chorus is completely inaudible. Of course, some of this maybe the lousy O’Keefe Centre acoustics but I think it’s mostly just bad engineering. The picture is very poor quality too. There are hard coded English subtitles. This is one to avoid.

“Thanks” to Lydia at Definitely the Opera for drawing this to my attention!