Cavalli’s Ercole amante was written for the wedding of Louis XIV to Marie-Thérèse, a Habsburg princess.  The marriage itself being the seal on the French victory over Spain in the war that had lasted until 1659.  It’s an odd work considering.  It’s not nearly as weird as, say, Il Giasone or La Didone but it’s hardly what one would expect for the nuptials of Le Roi Soleil.  It’s clear from both the Prologue and the ending that Ercole is Louis but he’s also a most unlikeable character.  In this version of the Hercules story he’s in love with his son’s (Hyllo) girlfriend (Iole) and will stop at nothing to bed her including casting off his wife (Deianira), imprisoning his son and bumping off Iole’s father.  In the end he’s attacked by the spirits of various people he has wronged before succumbing to the trick with the centaur’s poisoned shirt.  He’s made immortal and paired off with Hebe in the heavens but it’s hardly a tale of kingly virtue or marital fidelity.  For good measure, along the way a good chunk of the Graeco-Roman pantheon make an appearance. 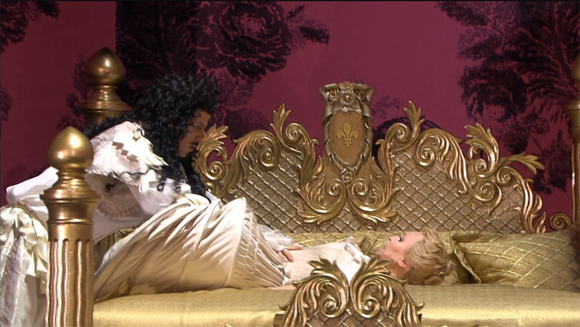 END_OF_DOCUMENT_TOKEN_TO_BE_REPLACED

The second half of the Amsterdam double bill that opened with Iphigénie en Aulide is, of course, Iphigénie en Tauride.  In this piece the more usual version of the Aulis story, where Diana substitutes a stag for Iphigenia on the altar and whisks the girl off to be her priestess among the savage Scythians of Tauris, is assumed.  So the piece opens with Iphigenia and six other Mycenean priestesses (how they got to Tauris is a mystery) in Diana’s temple at Tauris where their job is to sacrifice any strangers who show up.  Almost at once the capture of two Greeks is announced.  They turn out to Iphigenia’s brother Orestes and his sidekick Pylades and the the next 90 minutes turns on Iphigenia failing to sacrifice either of them. 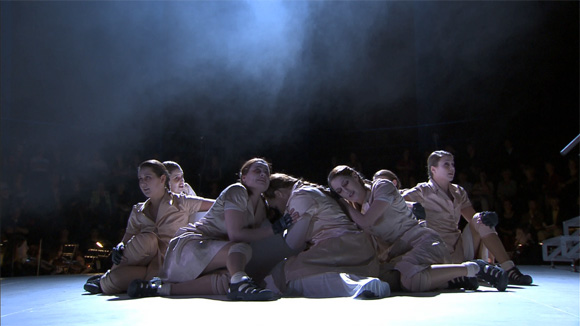 END_OF_DOCUMENT_TOKEN_TO_BE_REPLACED

Gluck’s Iphigénie en Aulide is finally available on Blu-ray and DVD.  It was staged and recorded as a double bill with Iphigénie en Tauride at De Nederlandse Opera in September 2011 in productions by Pierre Audi.  It’s excellent in just about every respect.  The cast is to die for, the production is interesting and so is the staging in the rather challenging space of The Amsterdam Music Theatre, which also poses problems for the video director.  Backed up, on Blu-ray, by a 1080i picture and DTS-HD-MA sound it’s a pretty compelling package.

END_OF_DOCUMENT_TOKEN_TO_BE_REPLACED

Rameau’s Castor et Pollux is a tragédie lyrique in five acts.  It’s a mythology based libretto which, ultimately, celebrates the fraternal love of the twins who rise to immortality while rather callously discarding the female human love interest.  Pierre Audi’s 2008 production for De Nederlandse Opera nods both to the baroque and to the mythological by staging the work in a rather abstract Sci-Fi sort of way but with moving sets and Fx that suggest, rather than reproduce, the stagecraft of the baroque.

END_OF_DOCUMENT_TOKEN_TO_BE_REPLACED

Martin Kušej’s 2006 production of Shostakovich’s Lady Macbeth of the Mtsensk District for De Nederlandse Opera is occasionally puzzling but mostly brilliant.  The performance, with a strong cast centering on Eva-Maria Westbroek’s Katerina, inspired conducting from Mariss Jansons and consistent excellence from the Royal Concertgebouw Orchestra in the pit and the Chorus of De Nederlandse Opera on stage is unbeatable.  Combine that with decent video direction and superb audio-visual quality and the Opus Arte Blu-ray package becomes very attractive indeed.

Kušej’s Konzept really turns on two ideas; the exploration of sex, violence and power or, as he puts it, orgasm and murder, and the universality of the piece which causes Kušej to downplay the Russianness of the piece.  The set, pretty much throughout, consists of two elements a well lit glass “cage” and, surrounding it, a peripheral region of dark and dirt.  Katerina is trapped in the glass cage.  Her meaningless bourgeois existence is symbolised by more shoes than Imelda Marcos ever owned.  Most of the violence takes place in the peripheral area.  The scene where Aksinya is raped is played out in a sea of mud.  It is quite revolting and rightly so.  It also features one of the finest pieces of operatic singing and acting in extreme conditions I have ever seen and Carole Wilson, the Aksinya, really deserves some kind of medal.  The somewhat less violent but no less intense sex scene between Katerina and Sergei is played out on a strobe lit stage.  It brilliantly avoids the impossibility of portraying realistic sex on stage while letting the very explicit music tell the story.

The extreme acting continues through a bloody flogging scene and a brilliant drunk scene where Alexandre Kravets, as the Shabby Peasant, staggers around all over the place before finding Zinovy’s body and hauling it off to the police station.  Those who know the work well will realise that this involves a departure from what the libretto is telling us.  I didn’t find it problematic.  There’s a similar, perhaps larger, issue in Act 4 which is set in a prison not an overnight rest stop on the march to Siberia.  There’s no material rationae for Sonyetka to want Katerina’s stockings but perhaps the power to humiliate is even more convincing as a motivation than a simple desire to keep warm.  There’s no river and no suicide.  In this version the convicts hang Katarina with her own stockings.  It’s not what the libretto is saying but it is dramatically powerful.  All up, I felt Kušej’s Konzept and his realisation of it were very powerful and true to the spirit of the piece.

The individual performances are excellent.  Clearly, everyone concerned is totally committed to bringing off this production.  Eva-Maria Westbroek is really impressive.  At the beginning she oozes anger and sexual frustration, at the end, despair.  She sings brilliantly throughout.  She’s very well supported by Christopher Ventris as Sergei  He oozes sexual menace and arrogance.  Vladimir Vaneev is appropriately brutal, coarse and lecherous as the patriarch Boris.  Besides Carole Wilson and Kravets there are excellent performances from Lani Poulson as Sonyetka, Alexander Vassiliev as the Priest and Nikita Storojev as the Chief of Police.  Ludovit Ludha does a pretty decent job in making something interesting out of the rather thankless role of Zinovy.

I can’t imagine a better reading of the score than Janson’s or more idiomatic and incisive playing than the Concertgebouw provide.  If you have heard this orchestra play Shostakovich symphonies you wil know what to expect.  It’s quite thrilling and fully justifies Kušej and Jansons’ decision to play the interludes in front of a blank curtain.  The chorus sings splendidly despite some extreme acting demands.

The video direction by Thomas Grimm is OK.  We get enough to see, most of the time, what Kušej is up to although are were many occasions when he has the camera in way too close and some of the camera angles are a bit odd.  In the interludes he chooses to focus on Jansons who is extremely energetic!  It’s not the best video direction ever but it’s better than the typical Large or Halvarson production.

Technical quality is a s good as it gets which is about par for Opus Arte Blu-ray.  The picture is 16:9 1080i and crystal clear.  The sound is extremely vivid PCM 5.0 (there’s also a PCM stereo option) although there are times when I think the voices are balanced a little further forward than they should be.  There are subtitles in English, French, Italian, Dutch, German and Spanish. Extras include a synopsis, a cast gallery and a one hour “making of” documentary by Reiner Moritz.  It’s pretty much essential viewing for this production.  The trilingual booklet includes a track listing, a historical essay and short notes by the director.

I still don’t have a way of doing screen caps from Blu-ray so, in lieu, here’s a Youtube clip.  It includes the Aksinya rape scene which gives a pretty good idea of the overall commitment involved in this production.  It is, quite emphatically, not safe for work.