Martin Kušej’s 2006 production of Shostakovich’s Lady Macbeth of the Mtsensk District for De Nederlandse Opera is occasionally puzzling but mostly brilliant.  The performance, with a strong cast centering on Eva-Maria Westbroek’s Katerina, inspired conducting from Mariss Jansons and consistent excellence from the Royal Concertgebouw Orchestra in the pit and the Chorus of De Nederlandse Opera on stage is unbeatable.  Combine that with decent video direction and superb audio-visual quality and the Opus Arte Blu-ray package becomes very attractive indeed. 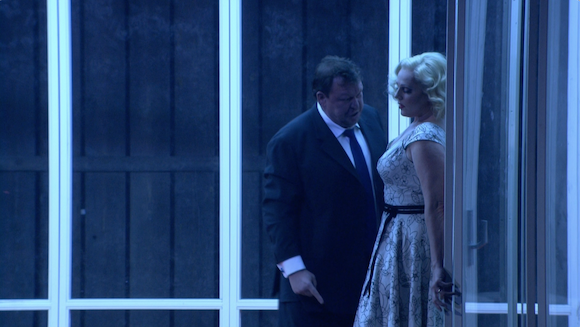 END_OF_DOCUMENT_TOKEN_TO_BE_REPLACED

Shostakovich’s The Lady Macbeth of the Mtsensk District is becoming quite a staple of the opera repertoire. Even so, I’m still a bit surprised to see a production from the Teatro del Maggio Musicale di Fiorentino making it onto DVD and Blu-ray. It’s a 2008 recording with James Conlon conducting and Lev Dodin directing a mostly Russian cast though with Jeanne-Michèle Charbonnet in the title role. 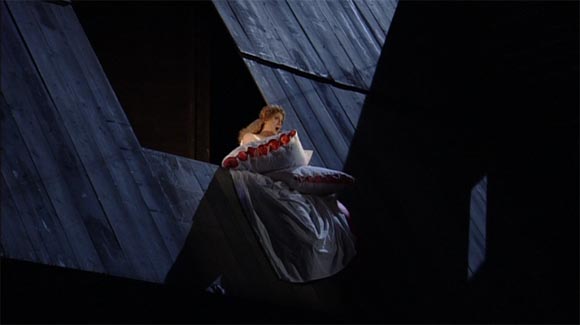 The production is fairly conventional. A wooden set serves variously as the interior of the Izmailov’s warehouse, the police station, some external scenes and, with minor changes, the convict’s camp. There are various galleries and a sort of eyrie that serves as Katerina’s bedroom. The production is not particularly exciting. The seduction/rape in Act 1 is depicted by Katerina’s bedroom light swaying increasingly wildly while a minor character clowns across the stage. It really stays in much the same key until Act 4 where everything goes blue and white and “snow” pours down continuously onto the stage. Sergei and Sonyetka get it on under a big white sheet while the rest of the convicts look on. The push/jump into the river happens so suddenly and unobtrusively that if one didn’t know the plot one might miss it. 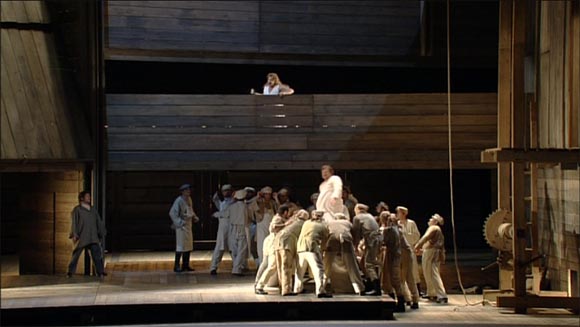 Maybe it’s the essential dullness of the production that causes video director Andrea Bevilacqua to take the approach he does, which is highly interventionist. Sometimes we get to see the action more or less as the theatre audience does but often we get extreme closeups or weird angles; backstage, side stage, from the pit, the works. He also indulges in some video trickery. At least I think that’s what’s happening in the scene with Boris’ ghost which is very white and somewhat out of focus. I don’t think the effect could be produced with stage lighting. In Act 4 Bevilacqua also pulls out the fades, dissolves and superpositioned shots. As a video in its own right it is quite interesting. As a record of a stage production it largely fails so whether one likes it or not becomes largely a question of point of view on what a video recording of a live opera performance should be. The disk includes an introductory credits sequence which involves what appear to be black and white portraits of the cast put through Photoshop’s oil painting filter. It really is a taste of things to come.

Musically this is a mixed bag. James Conlon takes an unusually lyrical view of the score and at times his Florentine orchestra sounds almost more like Verdi than Shostakovich. I was sufficiently surprised by his reading of the first act, especially the scene at the end between Sergei and Katarina that I put on the Amsterdam production (Mariss Jansons conducting the Concertgebouw) for a comparison. It’s night and day. Conlon shapes long legato phrases and the percussion is quite restrained. Jansons is strident and staccato with incisive percussion and blaring brass. Jansons sounds much more like the music I fell in love with as a teenager! Conlon is not quite as extreme in the remaining acts but it’s still very restrained Shostakovich. The singing is generally pretty good. The stand out is Vladimir Vaneev as the brutally lecherous father in law. Sergei Kunaev is an adequate Sergei but he’s not terribly charismatic and the chemistry between him and Charbonnet never really gets going. She’s OK too but her vibrato increases with volume and is really quite obtrusive when she’s singing loud.

Technically the DVD production is pretty good. It was filmed in 1080i and is generously spread across two DVD9 disks. The picture is comparable with DVD releases from the MetHD series. Sound options are LPCM stereo, Dolby 5.1 and DTS 5.1. As to be expected the DTS track is the best bet. It’s clear, spacious and detailed. The dynamic range seems a bit limited but I think that’s probably the orchestra and the house acoustics rather than a fault in the recording. There are Russian, English, Italian, German, French and Spanish subtitles. There are no extras but the booklet includes casting, a full track listing, a historical essay and a plot synopsis. 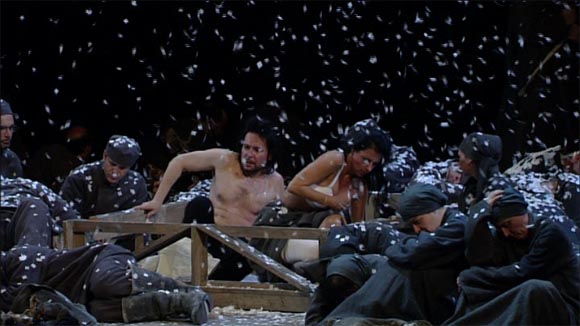 People who find the dramatic liberties that Martin Kusej takes with his Amsterdam production really irritating may prefer this. Most people, I suspect, will prefer that version. So I guess I’d better do a full review sometime.