Last night’s TSO concert was billed as a Tribute to Maureen Forrester with Ben Heppner MCing.  Inevitably the main even was Mahler’s Das Lied von der Erde but first there was a sesquie and the premiere of a new piece; L’Aube, for mezzo and orchestra by Howard Shore (he of Lord of the Rings etc).  This was a setting of five poems by Elizabeth Cotnoir. It was retro, lush, tonal and, in a sense, well crafted but with very little variation between the movements, all of which were very slow.  Susan Platts rich mezzo added to the rather soporific effect. Call me an unreformed modernist if you like but I’m really not sure what a piece like this adds to the symphonic repertoire.

END_OF_DOCUMENT_TOKEN_TO_BE_REPLACED

James Robinson’s production of Donizetti’s L’elisir d’amore was designed for various American regional houses.  It has been updated to 1914ish and been given “regionalization” tweaks in the towns in which it has appeared.  The version that opened at the COC last night has been transported to small town Ontario, Niagara on the Lake perhaps, during a Fall Fair.  There’s a bit of a problem.  The iconography; Kitchener recruiting posters, steel helmets etc, clearly place the action during, rather than before, WW1.  Maybe an American director just doesn’t get, or doesn’t care about the implications but Adina buying Nemorino out of the army for example would hardly have been seen as virtuous in the white feather infested British Empire of 1914.  Fortunately most of the audience either didn’t get it or didn’t care either and frankly even persnickety me was prepared to let it go and just enjoy the rather silly romp that we got.  After all, this is not the other opera about love potions!

END_OF_DOCUMENT_TOKEN_TO_BE_REPLACED

Here’s a preview of things to see/listen to next week.  It’s Met in HD season again and the next two Saturdays have broadcasts.  On the 7th it’s Bellini’s Norma with Sondra Radvanovsky and Joyce DiDonato.  It’s a David McVicar production and no prizes for guessing what happens when you cross McVicar and druids.  On the 14th it’s Die Zauberflöte with the Resident Groundhog conducting.  It’s the Julie Taymor production but given in full in German rather than the abridged ‘for kids” version.  The best thing about the cast is René Pape’s Sarastro.

END_OF_DOCUMENT_TOKEN_TO_BE_REPLACED

For the longest time the classic 1995 Glyndebourne recording of Janáček’s Věk Makropulos was the only video option.  It’s now been re-released on DVD and Blu-ray in a completely remastered version.  I watched the Blu-ray and it’s as well restored as the companion recording of Peter Sellars’ equally classic Theodora.  As it’s drawn from a Channel 4 broadcast the picture is 4:3 and it’s presented here formatted for wide screens in what is, apparently, called “pillarbox” mode in the UK.  At any event, the picture is excellent; certainly the equal of many more recent recordings, if not quite of the best HD quality.  The sound, stereo only, is decent but  a bit “boxed in” and the voices often seem to balanced a long way back. 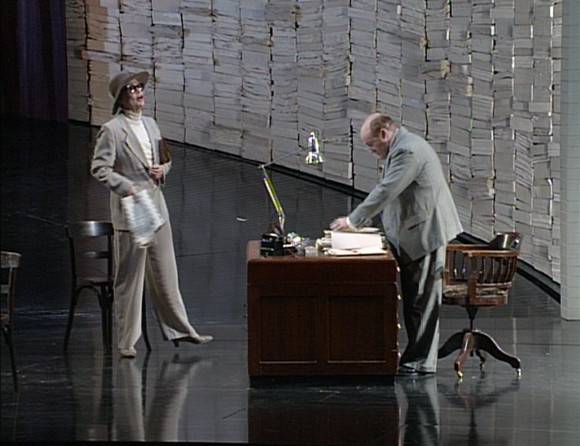