James Robinson’s production of Donizetti’s L’elisir d’amore was designed for various American regional houses.  It has been updated to 1914ish and been given “regionalization” tweaks in the towns in which it has appeared.  The version that opened at the COC last night has been transported to small town Ontario, Niagara on the Lake perhaps, during a Fall Fair.  There’s a bit of a problem.  The iconography; Kitchener recruiting posters, steel helmets etc, clearly place the action during, rather than before, WW1.  Maybe an American director just doesn’t get, or doesn’t care about the implications but Adina buying Nemorino out of the army for example would hardly have been seen as virtuous in the white feather infested British Empire of 1914.  Fortunately most of the audience either didn’t get it or didn’t care either and frankly even persnickety me was prepared to let it go and just enjoy the rather silly romp that we got.  After all, this is not the other opera about love potions! 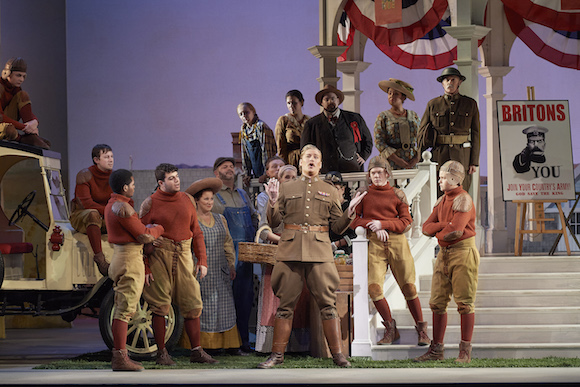 So what we get is a sort of Norman Rockwell-esque set with stylized painted flats and, bits of Empire imagery, period costumes and a (seriously anachronistic) ice cream truck (or van I suppose in period usage if there had been one).  Against this backdrop there’s some really good singing and more than decent comedy (though no doubt the timing will get slicker as the run progresses).  Andrew Haji, as an icecream salesman Nemorino, is touching and lovely to listen to.  Una furtiva lagrima was exactly what it’s supposed to be; exemplary, liquid, bel canto tenoring.  Gordon Bintner is a suitably swaggering Belcore (in a surprisingly accurate uniform bar the haircut) and his firm, powerful baritone is perfectly apt.  Andrew Shore, as Dulcamara, is very assured with excellent patter work and a good deal of physical and vocal agility.  Simone Osborne, as Adina, sings sweetly and with plenty of agility in the show off numbers.  There are also few better at expressing the rather OTT indignation of a scorned young woman.  The chorus moves and sings efficiently (there’s only one chorus actually it just gets performed fourteen times).  Yves Abel in the pit goes for flamboyance rather than delicacy and the orchestra responds appropriately.

Nobody, least of all the director, is taking things too seriously as the many injections of music hall elements showed.  Yes, Mr. Haji does the top hat and cane dance lacking only a chorus of naked ladies as a backdrop and Gordon Bintner gets some comic cuts fisticuffs.  The expression on Ms. Osborne’s face when her (fortunately padded) bottom collides with a stair bollard alone is worth the price of admission.  Then there’s the football team…  So, taken as a rather superficial romp it’s a good evening at the theatre with plenty of laughs and some good singing and acting. 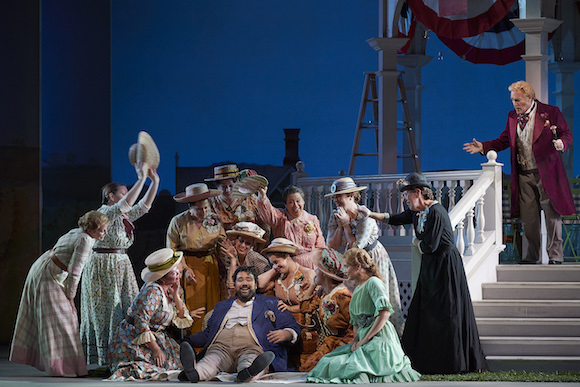 3 thoughts on “Elixir in Niagara?”