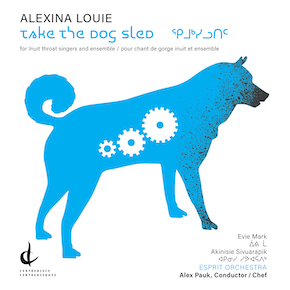 And now, as they say, for something completely different.  Take the Dog Sled is a short piece in eight movements by Canadian composer Alexina Louie scored for instrumental ensemble and Inuit throat singers.  The movements have titles like Bug Music and Sharpening the Runners on the Dog Sled.  The style is mostly a kind of high energy playful minimalism with quite a lot of percussion and percussive effects from other instruments.  It’s often quite onomatopoeic.  There are also some quite beautifully, hauntingly evocative passages.  The throat singers are used sparingly but to good effect.

END_OF_DOCUMENT_TOKEN_TO_BE_REPLACED

Yesterday’s lunchtime concert in the RBA featured members of the Esprit Orchestra and Krisztina Szabó.  Two instrumental pieces kicked things off.  There was an Andrew Staniland composition for snare drum and electronics; Orion Constellation Theory, played by Ryan Scott.  This was quite witty and inventive.  Very Staniland in fact.  Then came a three movement work for solo harp; Alexina Louie’s From the Eastern Gate played by Sanya Eng.  For two movements it was light and bright using mainly the upper end of the harp’s range.  It was engagingly tuneful too though not in any kind of conventionally tonal way.  The third movement was darker, louder and more dramatic, brooding even, and using a far wider range of the instrument’s capabilities.  All up, an interesting piece.

END_OF_DOCUMENT_TOKEN_TO_BE_REPLACED

And in the coming week…  On Tuesday there is a treat for fans of contemporary music.  Krisztina Szabó will be performing the Berio Folksongs in the RBA at noon.  She will be accompanied by members of the Esprit Orchestra and the programme also includes Andrew Staniland’s Orion Constellation Theory and Alexina Louie’s From the Eastern Gate.

Thursday sees the opening of the COC season with Strauss’ Arabella in a production by Tim Albery starring Erin Wall, Jane Archibald and Tomasz Konieczny.  Check out this article by Lydia Perovic for a South Slav’s take on an opera with South Slav references including that hardy Strauss perennial; hunting bears in Croatia.  Arabella runs until the 28th at the Four Seasons Centre.

On Saturday, indigenous production company Red Sky Productions are collaborating with the TSO in a new piece by Eliot Britton; Adizokan.  It’s a fusion of dance, video electro-acoustics and music in both western symphonic and indigenous traditions.  7.30pm at Roy Thomson Hall.

It was an unusual double bill at the TSO last night; the premiere of Alexina Louie’s Triple Violin Concerto and Brahms’ A German Requiem.  The concerto is an interesting piece.  It’s got a layered, shimmery quality that sounds quite modern without going off into territory that would frighten the punters.  It also makes excellent use of the three virtuoso soloists for whom it was written; Jonathon Crow, Yosuke Kawasaki and Andrew Wan; concertmasters respectively of the the TSO, the NAC Orchestra and l’Orchestre Symphonique de Montréal.  It clever plays the combinations of having soloist dialogue with soloist and soloists dialoguing individually and collectively with the orchestra.  Very enjoyable.

END_OF_DOCUMENT_TOKEN_TO_BE_REPLACED 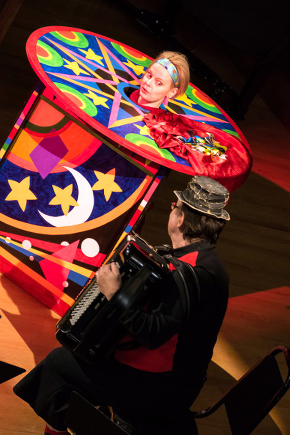 A concert of contemporary works for accordion?  Why not!  Well it was more of a concert of contemporary works for fixed reed instruments with, ironically, Trinity St. Paul’s most impressive fixed reed instrument forming an unused but imposing backdrop to the proceedings.  Things started off conventionally enough with Soundstreams’ Artistic Director Lawrence Cherney on stage with three players of different instruments describing their histories and properties and then mild Hell broke loose as a curiously clad Joseph Macerollo burst into the auditorium, ejected Lawrence and friends and launched into R. Murray Schafer’s performance piece La Testa d’Adriane; the tale of a head mystically preserved between life and death.  At this point the purpose of the rather bizarre contraption on stage was unclear but soon enough the cloth was pulled back to reveal Carla Huhtanen, or her head at least.  More accordion and speech from Macerollo and a bizarre collection of grunts, squeaks, shrieks and gurning from Carla followed.  Madness or genius?  It’s Schafer.  The question is unanswerable.

END_OF_DOCUMENT_TOKEN_TO_BE_REPLACED

So this has to be the weirdest opera related thing I’ve seen in a while. It’s a 2005 CBC production of eight very short comic operas (the whole thing only lasts an hour) going through the stages of a relationship from Attraction to Starting Over via Marriage and Murder. The characters are mostly played by actors lip-synching while someone else sings. The music is by Alexina Louie and the libretto by Canadian comic, Dan Redican. Each piece is introduced by Redican as a mad toast scientist and the cast includes some of the best known names in Canadian theatre and opera including Colm Fiore, Isabel Bayrakdarian and Russell Braun. It sounds like a great idea but unfortunately it’s pretty ordinary. The music is mostly dull but it livens up a bit when it’s more obviously pastiche. The humour is a bit lame though the piece about a woman slicing her husband’s head off then disembowelling and liquidizing him for leaving the toilet seat up has its moments; especially her acquittal by an all female jury. Also you get to hear Isabel Bayrakdarian sing about kitty litter and Russell Braun do a version of Der Hölle Rache.

All in all, it’s as Canadian as moose jokes and about as funny. 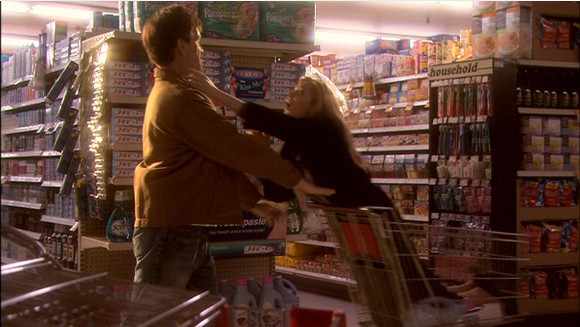 So it’s been four years since I last watched this and the funny thing is that in that time I’ve come to know, one way or another, most of the singers involved in this thing who include Michael Colvin, Krisztina Szabó, Shannon Mercer, Peter McGillivray, Barbara Hannigan and Doug McNaughton.  It does make it more fun but I guess that doesn’t really work for a general audience.  It also makes me a bit baffled about who got to be played by an actor and who got to sing and act.  There are some pretty good actors involved here who never get seen.