There is, finally, a recording of Britten’s Peter Grimes on Blu-ray.  It’s a Richard Jones production with a largely British cast, recorded at La Scala in 2012.  The sound and picture quality are first rate.  Unfortunately the production and performances aren’t so much. 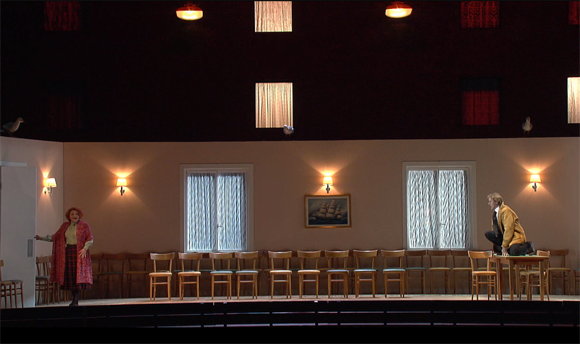 Richard Jones has chosen to set the piece in the 1980s and to portray the inhabitants of the Borough as a sort of inbred hive mind fuelled by prejudice, alcohol and drugs.  Actually it’s not a bad concept but it comes off as exaggerated with cast and chorus repeatedly making more or less coordinated middle aged disco moves.  He also portrays the nieces as the sort of permanently stoned bubble heads one wants to avoid on the last train home. There are some neat touches.  The Moot Hall, The Boar and Grimes’ hut are all formed by box like spaces that are tilted and rotated to good effect.  The lighting is effective too.  Unusually for a modern production Jones doesn’t provide any staging for the interludes, leaving the theatre dark with the curtain down.  Overall, it’s a production I’d want to take a second look at but I suspect it’s just painted too broadly to be really effective.

END_OF_DOCUMENT_TOKEN_TO_BE_REPLACED

It’s a rare and valuable experience when a performance makes one reconsider a perhaps overly familiar work.  That’s the effect that Claus Guth’s 2009 staging of Handel’s Messiah had on me.  I don’t think that there is any piece I’m more familiar with than Messiah.  I feel like I’ve known it all my life.  I’ve sung it.  I own a vocal score (rare indeed for me!).  I couldn’t begin to count how many times I’ve heard it.  And yet here it came up entirely fresh and had me thinking about it in completely new ways.