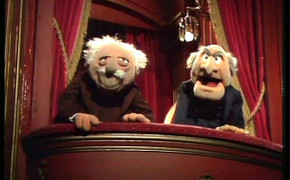 A couple of years ago I produced a series of “best of” lists for video recordings, which I’ve updated from time to time.  One can find them on the Index of DVD reviews page.  So, for fun, I thought I’d put together a “weirdest” list.  Mostly this captures operas that are intrinsically weird but I’ve included the odd recording where the director has gone a bit nuts in an attempt to get something out of non too promising material.  So, in alphabetical order by composer, here is the “weird list”.   END_OF_DOCUMENT_TOKEN_TO_BE_REPLACED

Last night’s Soundstreams Koerner Hall presentation; Magic Flutes was an interesting experience.  Aside from interesting (mostly) contemporary flute pieces it was very much an experiment in different ways of staging a concert.  I’m all for breaking down the conventions of Mahlerian solemnity and I think experimentation is great.  It’s in the nature of taking risks though that some things don’t quite work.

END_OF_DOCUMENT_TOKEN_TO_BE_REPLACED

Spuren der Verirrten (The Lost) is described on the box as an opera by Philip Glass.  That’s pretty misleading.  It’s more a theatre piece/ballet by David Pountney and Amin Hosseinpour with a soundtrack by Philip Glass.  It was created for the opening of the new Landestheater Linz at the instigation of Artistic Director Rainer Mennicken (carefully trimmed beard, wire rimmed glasses) who wanted a piece that would encapsulate all the various theatrical forms the new building would stage, as well as show off its technical capabilities.  Mennicken also wrote the “libretto” based on a highly abstract play by Peter Handke which seems to deal with the hopelessness of the human condition in some sort of post apocalyptic world.  There’s no plot as such and the work unfolds in a series of scenes.  For example there’s a ballerina point shoeing across the stage followed by a “spectator” in the auditorium commenting on the action followed by dancers with roadsigns followed by a Gumby like couple sitting under a table followed by more narration.  Then come more dancers in Hosseinpour’s signature “jerky” style followed by a woman with an anti-nuclear sign having a row with her boyfriend in front of a giant green brain.  And that’s just the first ten minutes of a piece that goes on for nearly two hours.  Along the way we get a reality TV show in which the characters discuss whether a serial killer is worse than a goalkeeper who lets in a soft goal, a confrontation between the patriarch Abraham and a giant rabbit and a scene where a naked woman cuddles a human head while two dancers do the fish slapping dance around her.  The piece concludes with the orchestra on stage and the chorus in the pit miming playing instruments and singing “blah, blah, blah” which actually fits the music pretty well. 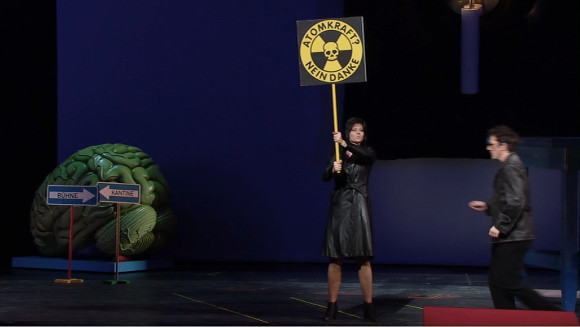 END_OF_DOCUMENT_TOKEN_TO_BE_REPLACED

The Perfect American is the ironic title of Philip Glass’ latest opera which premiered in Madrid last year.  It’s about Walt Disney and set at the end of his life looking back at his life and forward to his death.  It’s a not very flattering portrait.  It depicts Disney as blinkered, racist, virulently anti-Communist and, in fact, only comfortable with a sort of Leave it to Beaver America; though passionate about that.

END_OF_DOCUMENT_TOKEN_TO_BE_REPLACED

Needing something suitable to celebrate Britten’s 100th birthday I decided to go and see the National Ballet’s new show Innovation which premiered last night and included a piece set to the Four Sea Interludes from Peter Grimes.  A Pergolesi Stabat Mater with Emma Kirkby and Daniel Taylor was a considerable additional attraction.  I’m not a dance expert so take any comments on that subject that follow as the impressions of a complete non-expert.

END_OF_DOCUMENT_TOKEN_TO_BE_REPLACED

Considering the opera season in Toronto usually pretty much wraps up in May there’s a lot on over the next few days.  I guess the big ticket Is Philip Glass’ Einstein on the Beach which is running tonight, tomorrow night and Sunday afternoon/evening.  Unfortunately it’s extremely long and I have early reffing gigs both Saturday and Sunday so that pretty much rules it out.  It’s also at one of my least favourite performance spaces; the Sony Centre.  Also on this weekend is the Canadian Children’s Opera Company performance of a new work by Errol Gay called Laura’s Cow. based on events in the War of 1812  That’s on at the Enwave and I managed to score a couple of comps so I shall be going to that.  Then on Monday and Tuesday evenings Tapestry New Opera are workshopping Aaron Gervais’ The Enslavement and Liberation of Oksana G. at the Distillery.  Most all opera in Toronto happens within walking distance of the Kitten Kondo but that one is scarcely five minutes away.  The lemur is rehearsing so I’ll be on my own at that one. Busy times!