A vocalist accompanying himself on the guitar (or one of it’s predecessors) is one of the oldest and most prevalent tropes in western music.  From Blondel to Billy Bragg it’s always been with us but it’s quite rare in the world of modern art music where the roles of singer and accompanist are trades as rigidly delineated as anything in a Clydeside shipyard.  Doug MacNaughton breaks the rules by playing a variety of kinds of guitar and singing in a range of styles.  For that question of style is vital too.  The mechanics of doing two jobs simultaneously affect singing style and centuries of performance history offer a bewildering range of stylistic choices.  It’s an issue I examined once before when reviewing a Bud Roach CD for Opera Canada.

END_OF_DOCUMENT_TOKEN_TO_BE_REPLACED

Yesterday’s Talisker Players concert Creature to Creature was a well balanced selection of music and readings inspired by the idea of a bestiary.

First up was a set of Poulenc settings of Apollinaire texts. These songs, for mezzo, string quartet, flute, clarinet and bassoon, are very short and deceptively simple being both textually and musically many layered. They were very beautifully sung by Norine Burgess. Her fairly bright mezzo seemed well suited and there was sensitive accompaniment from the band among whom clarinetist Peter Stoll was particularly impressive. END_OF_DOCUMENT_TOKEN_TO_BE_REPLACED

The Talisker Players are presenting a show called present Creature to Creature on March 16 and 18 at Trinity St. Paul’s Centre. It’s inspired by mediaeval bestiaries and takes on human foibles through the lens of animal behaviour.  It had better be good because I can scratch quite nastily. The Taliskers will be joined by mezzo soprano Norine Burgess, baritone Geoffrey Sirett (more impressive every time I see him), and theatre artist Ross Manson.

END_OF_DOCUMENT_TOKEN_TO_BE_REPLACED 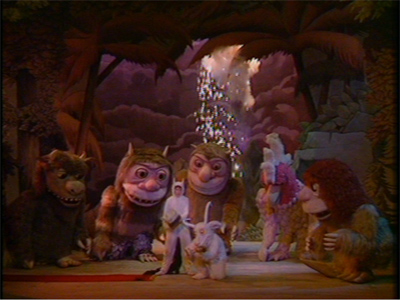 So I thought the obvious antidote to Robert Carsen’s Dialogues des Carmélites would be the recording of Ollie Knussen’s Where The Wild Things Are and Higglety, Pigglety, Pop that was sitting in my ‘to watch’ pile.  It’s a 1985 Glyndebourne recording and the Associate Director is one Robert Carsen, assisting Frank Corsaro.  So it goes.  Actually it was rather fun, if a bit irritating in the way that children’s literature written for kids with ADD seems to be.  The music is terrific and not at all dumbed down.  The sets and designs, as well as the libretto, are by Maurice Sendak himself and there’s some pretty neat lighting by Robert Bryan.  The Wild Things are really cool and almost make up for the fact that Max (played here by Karen Beardsley) is an appalling little s$%t who needs a good kick in the backside.  HHP is a bit more restrained and simultaneously manages to be less fun but also less annoying.  It has a rather splendid lion and Cynthia Buchan does rather well as, to the best of my knowledge, the only Sealyham terrier in opera.  Knussen conducts the London Sinfonietta and they sound really good.  END_OF_DOCUMENT_TOKEN_TO_BE_REPLACED

Mid period Verdi in a highly traditional La Scala production isn’t usually my cup of tea but I thought that if the usually excellent Opus Arte label thought the thing was worth a reissue it might be worth watching.  With caveats, it was, even for someone who is as allergic to this kind of production as myself.
END_OF_DOCUMENT_TOKEN_TO_BE_REPLACED