I’m ambiguous about Italian regional houses in general but what I’ve seen of the Teatro Regio Torino has impressed.  They have a fine orchestra and a chorus that can sing and act and they are not afraid to take risks.  All of that is very much in evidence on their recording of Gounod’s Faust made in 2015.  The production is designed, directed and choreographed by Stefano Poda and, like rather a lot of his work, it’s long on big architectural statements and large scale stage pictures.

END_OF_DOCUMENT_TOKEN_TO_BE_REPLACED

Vincent Brossard’s production of Verdi’s Otello for the 2016 Salzburg Easter Festival is both elegant and subtle; the latter quality being backed up by superb singing and acting from the principals.  In many ways the production is clean and straightforward with a focus on character development but it also makes use of elegant lines and sharply contrasting darks and lights in creating the stage picture.  There’s also a really cool use of mirrors during Già nella notte densa that I can’t quite figure out.

END_OF_DOCUMENT_TOKEN_TO_BE_REPLACED

Rossini’s Aureliano in Palmira is a rarity for a whole host of reasons.  There’s no definitive edition.  Many of the extant scores have much easier versions of the main arias for the tenor titular character.  Quite a bit of the music was reused for Il barbiere di Siviglia, often in ways that seem quite odd after hearing it in its original context.  Finally, the plot is a bit thin.  Not that that usually worries bel canto aficianados.

END_OF_DOCUMENT_TOKEN_TO_BE_REPLACED

Sven-Eric Bechtolf’s stagings of the Mozart/da Ponte operas in Salzburg concluded in 2015 with Le nozze di Figaro.  I think it’s the most successful of the three.  Bechtolf’s strengths lie in detailed direction of the action rather than bold conceptual statements and Nozze is probably the least in need of, and the least amenable to, the big Konzept.  There aren’t any real dramaturgical problems to solve.  It just works as written.  I don’t think that’s so true for Don Giovanni or Così.

END_OF_DOCUMENT_TOKEN_TO_BE_REPLACED

Every few years the Salzburg Festival replaces the productions of the three Mozart/da Ponte collaborations with new productions.  At least in recent years they have entrusted all three to the same director but the “refresh” happens in different years and not always in the same order.  I reviewed Claus Guth’s offerings here (Le nozze di Figaro, 2006; Don Giovanni, 2008; Così fan tutte, 2009) and noted the way that certain linking elements developed over the course of the “cycle”.  I was interested to see whether the same thing held for the newest iteration by Sven-Eric Bechtolf.  All three have now been released on Blu-ray (though due to availability issues I have the Così on DVD) so I thought I should watch them in the order they appeared at the festival and see what transpires.  So here we go with Così fan tutte recorded in 2013 in the Haus für Mozart.

END_OF_DOCUMENT_TOKEN_TO_BE_REPLACED

I find it interesting the way some opera composers become canonical to the point where their most unsuccessful (often deservedly so) works still get produced while others, equally famous in their day, disappear pretty much entirely.  One of the latter group is Gaspare Spontini who had a long career stretching from the the late 18th into the middle of the 19th centuries during which he was active in Italy, Paris, Vienna and Germany.  There was a revival of his La Vestale at La Scala with Visconti directing and Callas in the title role but otherwise the 20th century pretty much ignored him.  So obscure had he become that the Wikipedia entry for his operas describes his La fuga in maschera as “genre unknown”.  Perhaps that’s not so surprising as the work was last performed in 1800 and the score was thought to be lost until it turned up in an English bookshop in 2007.  Subsequently it was performed in 2012 at the Teatro GB Pergolesi in Jesi as part of the Festival Pergolesi Spontini.

END_OF_DOCUMENT_TOKEN_TO_BE_REPLACED

Rossini’s last opera, Guillaume Tell, was written for Paris and is an extremely ambitious piece of great musical sophistication.  It’s also very long.  Performed uncut, a rarity, it runs something like four hours including ballets.  It’s also hard to cast with the role of Arnold Melcthal in particular making unusual demands.  It’s a high tenor role combining the flexibility needs of a typical Rossini role with something much more heroic.  The soprano role of Mathilde has some of the same issues; signature Rossini coloratura is combined with the sort of dramatic heft one might more associate with early Wagner. 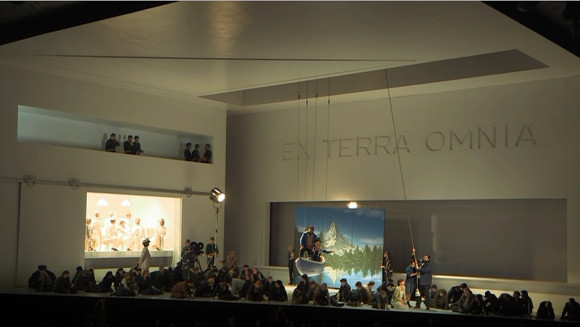 END_OF_DOCUMENT_TOKEN_TO_BE_REPLACED

I don’t usually associate Arnold Schoenberg with comedy but he did write a one act comic opera Von Heute auf Morgen which premiered in 1929.  It was an attempt to cash in on the vogue for satirical operas on modern themes characterised by Brecht and Weill and , if a bit slight and lacking Brechtian punch, it works well enough.  A bourgeios husband and wife have returned from an evening out where they have met an iold friend of the wife who has become something of a femme fatale.  There’s also a singer, inevitably a tenor, involved.  The husband is rabbiting on rather gormlessly about the charms of the “other woman” so his wife decides to teach him a lesson.  She apes the manners of a “modern woman”, neglects their child, plans assignations etc.  There’s a long phone conversation inwhich the “friend” and the singer invite them back to the bar.  By now the husband is beginning to realise what he stands to lose.  The wife realises she has won.  The other couple show up and there’s a “modern” vs. “traditional” quartet after which the “moderns” leave in disgust and the husband and wife revort to bourgeois domesticity. 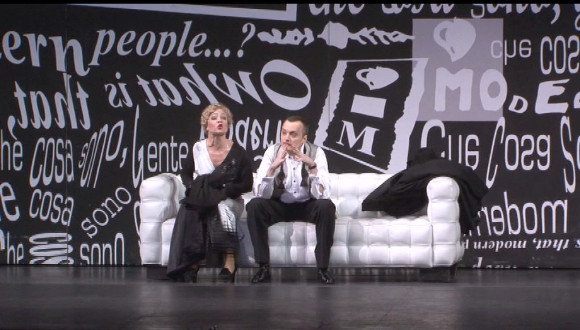 END_OF_DOCUMENT_TOKEN_TO_BE_REPLACED

The sudden death of Italian opera has always intrigued me.  Works, by Italians or to Italian libretti, dominated opera houses, at least in the English speaking world, for centuries.  The Metropolitan Opera even commissioned new work in Italian (Puccini’s La Fanciulla del West, 1910).  But after Turandot (1924) new works in Italian pretty much dried up.  I can’t think of a single one that could be considered a repertory staple and even more recherché pieces like Pizzetti’s Assassinio nella Cattedrale are few and far between.  Indeed, since WW2 at least, the dominant language for new operas has been English with German some way behind and the odd work in French or something more obscure.  So, I was intrigued to get my hands on a recording of Luca Mosca’s 2007 work Signor Goldoni; a commission for Venice’s La Fenice inspired by the 18th century Venetian playwright and librettist Carlo Osvaldo Goldoni.  What’s really surprising is that the libretto (perhaps we should say “book”) by Italian writer Gianluigi Melaga, is in English!  Apparently librettist and composer consider that English is better adapted to the kind of word play they were aiming for than Italian. 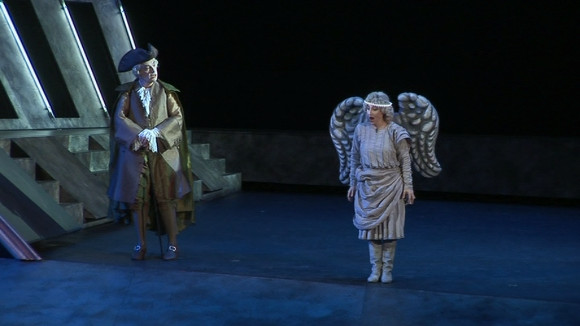 END_OF_DOCUMENT_TOKEN_TO_BE_REPLACED

Adelaide di Borgogna is one of those rather odd “serious” Rossini works where bel canto collides with opera seria.  The plot is fairly accurately based on an episode from 10th century history and is most definitely not a comedy.  The form has progressed well beyond a succession of da capo arias with multiple ensemble numbers and quite a few choruses.  But there’s a throwback to an earlier tradition in the use of high voices for heroic male roles though it seems that by 1817 castrati were rather rare and the crucial role of Ottone, the German emperor, was from the beginning sung by a female contralto. 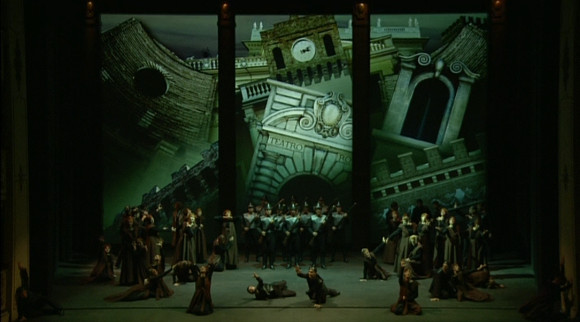