Verdi’s Falstaff, of course, is a farce so there’s no reason why a director shouldn’t treat it as one but all three of the other productions I’ve seen in the last few years have transposed it to the 1950s and put a spin on it.  Sven-Eric Bechtolf, in his production for the 2021 Maggio Musicale Fiorentino, just doesn’t do that.  It’s a 1590s (ish) setting and it’s played very broad.  There are big costumes, big gestures, entrances and exits and characters “hidden in plain view”.  It could be Dario Fo or Brian Rix.

It works quite well though I strongly suspect it was more fun to see live in the theatre.  It does seem a bit distant and dry on disk.  It’s all pretty well crafted but the final scene is definitely the best.  It’s cleverly lit so it’s clearly midnight but one can actually see what is going on.  I don’t now why design teams think that stages so dark the audience can’t see anything are a good thing but they too often do.

This one is helped by very good singing and acting that is effective in the aesthetic of the production.  The stand outs are Nicola Alaimo in the title role and the ultra reliable Ailyn Pérez as Alice Ford.  Sara Mingardo gets plenty of laughs as an OTT (even more than the others) Mistress Quickly and Caterina Piva rounds the trio out effectively as Meg Page.  Francesca Boncompagni is a sweet, bright toned Nannetta making a pleasing contrast with the more mature ladies.  The men are more than adequate too but, Falstaff aside, it’s the ladies who carry this show.  John Eliot Gardiner conducts.  He’s not a person I associate with Verdi (or comedy!) but he gets great playing from the house orchestra and the ensemble numbers are extremely crisp.

Tiziano Mancini directs for video judiciously.  He’s backed up by first class sound (stereo and DTS-HD on Blu-ray).  The picture too is excellent even in the darker scenes.  There are no extras but the booklet has an essay, synopsis and track listing.  Subtitle options are Italian, English, French, German, Korean and Japanese. If you want an essentially traditional Falstaff this will serve well though if one’s being really pedantic this is clearly set a couple of hundred years later than Shakespeare’s play.  Personally I’d be more likely to go for Richard Jones’ even broader take for Glyndebourne. Robert Carsen’s production isn’t available on disk but the Metropolitan Opera version of it is available as part of their “on demand” service. 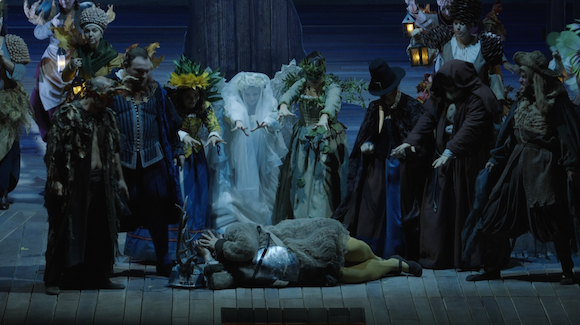