For quite some time I have wondered whether it’s possible to reinterpret Puccini’s Tosca or whether the specificity as to time and place in the libretto makes it effectively impossible?  Indeed I had never even seen it tried.  All this despite the many and obvious anachronisms in the libretto.  All the Toscas I had seen were clearly set in Rome in that one week in 1800 (or at least the implausible version of it that’s contained in the libretto)!  Phillip Himmelmann’s production for the 2017 Baden-Baden Easter Festival breaks the mould in giving it a contemporary, or perhaps near future, setting. 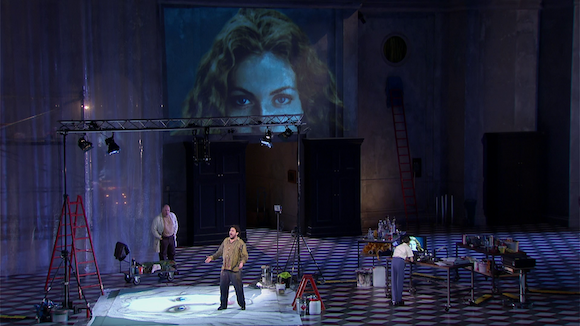 The church in Act 1 isn’t very churchy apart from the shrine to the Madonna.  Cavaradossi is working on the painting on the floor from a picture of Attavanti projected from his computer onto the wall.  There’s a young boy who appears to be related to the Sacristan wandering about.  We’ll meet him again later. Scarpia and his henchmen appear.  They are all dressed in black with rather odd glasses, blonde ponytails and shiny white things as buttonholes.  Are they a cult or a sort of high concept security service or is there really any difference?  The chorus sing the Te Deum in similar outfits which is rather chilling.  Cavaradossi is a bit of a scruff but Tosca is glam indeed in a red trouser suit.  Their relationship is physically intense.  “Not in front of the Madonna” indeed!

In Act 2 we are in Scarpia’s very swanky office.  It’s all black leather and chrome with floor to ceiling video monitors showing the outside world or, at times, what’s going on on stage.  This is 1984 minus the squalor and Victory Gin.  Maybe CIA headquarters when Jared Kushner succeeds his father in law as President for Life?  Tosca is even more glamorous here in a red concert gown.  The torture scenes are all the more chilling for being off stage.  One is struck by the dramatic intensity throughout.  It’s understated but, I keep using the word, chilling.  Vissi d’arte isn’t the usual brief lovely aria interlude but rather seems integral to the drama.

Act 3 is perhaps the strongest.  It opens, oddly, in Scarpia’s office which is being explored by the lad from Act 1.  He sings Io de’ sospiri on stage.  Then a curiously zombie like Sacristan collects him and takes him away.  A monumental mesh screen descends.  Almost everything else will play out in front of it.  The details are interesting.  Cavaradossi’s hands are so swollen that he has difficulty getting his ring off and can’t hold the pen to write his farewell letter.  E lucevan le stelle is highly dramatic.  The dynamics when Tosca appears are fascinating.  Cavaradossi clearly isn’t buying the “mock” part of “mock execution”.  He’s humouring her though.  The execution is filmed (and projected onto the mesh).  It’s done with some kind of single shot electrical thing.  It’s much more horrible than a firing squad.  When Scarpia’s corpse is discovered the screen goes up and we are back in Scarpia’s office.  His henchmen laugh at Scarpia’s death and then at Tosca.  They hand her the “gun” that was used to execute Cavaradossi. It works.  There’s a real sense of horror rather than it seeming like a contrived opera plot.

The performances fit the production concept.  Kristine Opolais is a fantastically intense, glamorous, dramatic and sexy Tosca.  This is a Tosca one could really imagine Scarpia lusting after.  She’s consistent in going for dramatic effect rather than sheer beauty of tone which may bother some people but I thought it was apt.  Marcelo Álvarez makes a very good foil as Cavaradossi.  He’s really believable.  Even E lucevan le stelle sounds like a man who thinks he’s about to die rather than an entry in a singing competition.  Scarpia is played Marco Vratogna and he shows the same repressed evil that made his ROH Iago so memorable.  This is the antithesis of Terfel’s rather OTT head butting bully.  Vratogna is just quietly, very deeply unpleasant.  The minor roles are all well taken with the standout being Peter Rose’s rather ambiguous Sacristan.  The kid (uncredited) who appears in Act 1 and 3 is rather good too.  The Philharmonia Chor Wien and the Cantus Juvenum Karlsruhe get the job done.

Simon Rattle and the Berlin Philharmonic are in the pit.  He’s a revelation.  There’s more contrast and wider dynamics than I’ve heard before and he’s also quite slow at times.  It reveals a subtlety in the orchestral writing that has previously eluded me.  The orchestra responds superbly.  One of the reasons for wanting to get hold of this disk was to see how Rattle and the Berliners would handle Puccini.  Now I know.  With a deft and uniquely subtle hand.

Andreas Morell shot the film.  It’s OK but I do feel in places that he somewhat undermines the stage concept, although he has some felicitous touches.  The use of near overhead shots in the first act makes sense given the painting on the floor but generally I think he’s too free with close ups.  What’s with the shots of Tosca’s legs in Act 1?  And in E lucevan le stelle I think we lose a lot by focussing relentlessly on close ups of Cavaradossi.  He’s all alone on a near empty stage in front of this massive mesh screen.  Seeing that picture, I believe, would say much more about his desolation at that moment.

The video quality on Blu-ray is top notch, which it needs to be because there are some quite dark scenes.  The DTS-HD sound is demonstration quality (there’s stereo too).  There are no extras on the disk and the booklet has a track listing and a generic synopsis (I hate that when the production departs somewhat from the generic!).  It’s a weakness.  I would have like to know more about the thinking behind the production.  Subtitles are English, French, German, Italian, Spanish, Japanese and Korean. 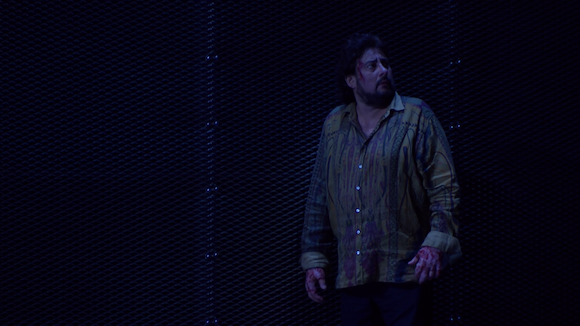 So, for me, this Tosca does what a good production should.  It made me think anew about a familiar work and how it might relate to us today without being too gimmicky.  It also has the sexiest Tosca I’ve seen and even traditionalists might want to hear what Rattle does with the orchestra.  Worth a look! 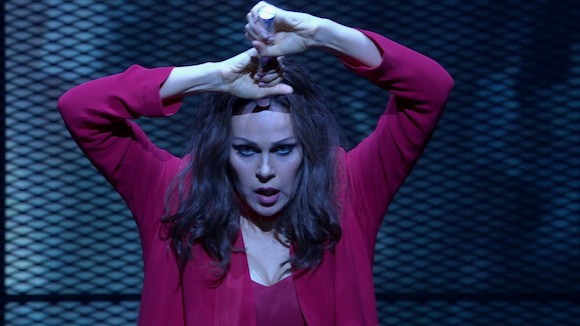 2 thoughts on “A different take on Tosca”