No opera says Glyndebourne like Mozart’s Le Nozze di Figaro.  It opened the first season in 1934 and inaugurated the new theatre in 1994.  Michael Grandage’s production which opened in 2012 was, I think, Glyndebourne’s fifth.  In any event it’s a fairly traditional affair though with the setting updated to the 1960s (though still set in a palace in Seville and I’ve got a nagging feeling that late Franco era Spain didn’t have much in common with the Haight and Carnaby Street but there you go).  The updated setting does allow for some visual gags with ridiculous 1960s dance moves but otherwise it could pretty much be anywhere, anytime.  There’s no concept and Grandage’s focus is on the interactions between the characters and the way they can be expressed in a relatively intimate house.

END_OF_DOCUMENT_TOKEN_TO_BE_REPLACED

Michael Grandage’s lack lustre Don Giovanni at the Metropolitan Opera made me very curious to see his very well reviewed 2010 production of Britten’s Billy Budd for Glyndebourne. It is now available on DVD and Blu-ray so I did just that. It’s as good as the Don Giovanni wasn’t.

The set design suggests the interior of a warship of the period (1797) which gives scope for galleries around and behind the main stage area. By changing the lighting and sliding panels into place, it easily becomes anywhere desired on the ship. It’s very much an ‘interior’ setting which is appropriate as the sea is as absent in Billy Budd as it is present in Peter Grimes. Having created a working stage arrangement, Grandage focuses on the Personenregie. What’s striking about this production is how the director works the relationship between the characters and the development of the characters as individuals. Claggart is chilling. Vere lacks, in the last analysis, moral courage but his distaste for Claggart and his manifestations is palpable. Billy radiates simplicity and innocence. The lesser parts too are fully developed, not just filler. Dansker really foreshadows what is to come.

Along with this Grandage contrives some truly striking images. In the prologue “old” Vere appears almost disembodied until the ship materialises around him and the action proper starts. Towards the end of Act1 there”s a striking picture of Billy and Claggart in the centre of the picture; Billy on deck,

Claggart above him at the quarter deck rail. In the final scene the men hauling on Billy’s rope could be straight out of Rodin. Needless to say it takes considerable acting skill across the company to pull all this off. Grandage gets this from a solid cast of anglophone singers led by John Mark Ainsley as Vere, Jacques Imbrailo as Billy and Phillip Ens as Claggart. There are lots of quite important supporting roles so here’s the full cast: 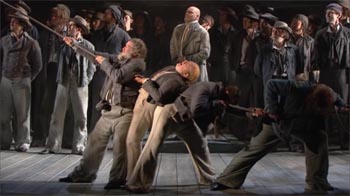 Musically too, this is a treat. The real stars here are the London Philharmonic and conductor Mark Elder. The orchestral playing is taut and incisive and shows off a really good score to fine advantage. The singing is glorious too. Clearly this is a work where the needs of the drama trump pretty singing but in the places where beauty is possible we get it. In the prologue one could easily mistake Ainsley for Pears as he floats the high notes. Imbrailo has a gorgeous voice and there’s some fine singing from many others. 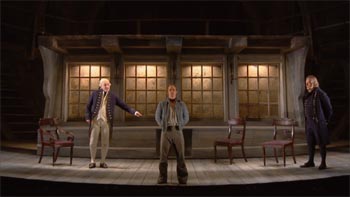 The technical team for this production is essentially the same as for The Fairy Queen and the results are equally good. François Roussillon lets us see the stage and only goes close up where it makes sense. This time I watched the DVD rather than the Blu-ray presentation (two DVD9 discs). It’s not quite as good as Blu-ray. The 16:9 anamorphic picture is very good but even on my less than state of the art TV it’s not quite as good as the 1080i Blu-ray. The sound difference is even more marked. The DVD sound is DTS 5.1 and is clear and well balanced but it comes up short on spatial depth compared to DTS-HD Master Audio. (There’s also LPCM stereo). There are English, French, German and Spanish subtitles, decent documentation and a few short extras on the first disc.

I recommended this unreservedly for both die hard Britten fans and those willing to explore but get the Blu-ray version if you can.

RF: What do you like best about this production?

MK: There’s nothing new in it so we get to do what we always do.