Nicholas Hytner’s production of Mozart’s Così fan tutte, seen at Glyndebourne in 2006, is about as traditional as it gets.  The story is straightforwardly told and the settings and costumes are 18th century Naples, or at least some operatic approximation of it.  That said, it’s immensely enjoyable and, just occasionally, goes beyond the superficial.  The strength lies in the casting and in the director’s decision to allow his young singers to behave like young people.  Miah Persson as Fiordiligi and Anke Vondung as Dorabella are close to perfect in their exuberant girlishness.  Naturally Vondung gets to be a bit ditzier than the angstier Persson because that’s how the thing is written.  Both of them sing extremely well too and there’s nothing lacking in the big solos or duets. 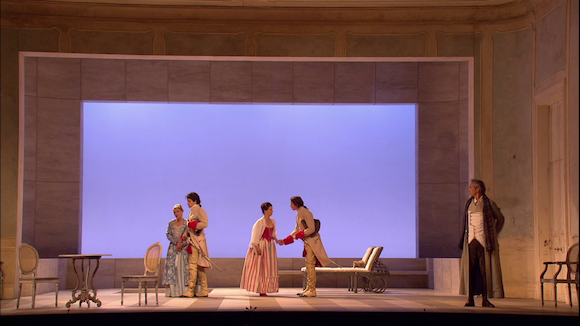 END_OF_DOCUMENT_TOKEN_TO_BE_REPLACED

Yesterday afternoon and evening we heard all sixteen contestants in the preliminary round of the art song competition and the eight semifinalists were announced.  To try and keep things interesting I’m going to do three posts; one on the afternoon, one on the evening and one on the judging and other general observations.  The first was written between the afternoon and evening sessions yesterday and I haven’t updated it with later information.  The second will be based on my notes and I’ll try to ignore who the fact that at time of writing I know the results.  So here’s the first post about yesterday afternoon… 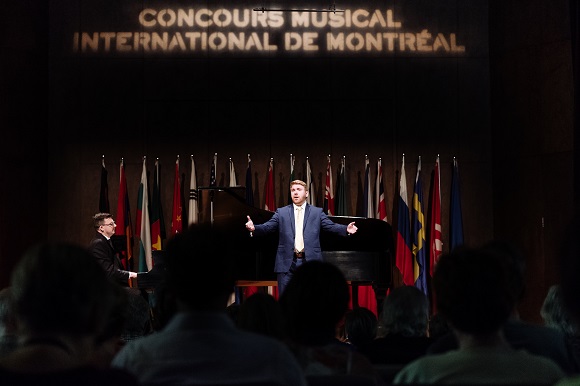 END_OF_DOCUMENT_TOKEN_TO_BE_REPLACED

Stefan Herheim’s 2012 production of Dvořák’s Rusalka for Brussels’ La Monnaie Theatre is predictably ambitious and complex.  He takes an explicitly Freudian (by way of Lacan) view of the piece(*).  The female characters are representations of male views of the female and, sometimes it seems, vice versa.  It’s seen most clearly in Act 2 and I found unpacking Act 1 much easier after seeing it so I’m going to start there.  We open not with bucolic, if coarse, peasants preparing for a wedding feast.  We are on a street in a scruffy part of, I guess, Brussels.  The gamekeeper and kitchen boy are replaced by a priest and a policeman.  The traditional dismembered game animals become a female chorus, many of them nuns, with exaggerated secondary sexual characteristics.  There is, essentially, an orgy.  Clearly the human world that Rusalka cannot enter is about sex in its most physical aspects not meaty Central European banquet platters!  Rusalka and the Foreign Princess are dressed and wigged identically.  They are quite freely interchanged.  Lines that are canonically addressed to one are addressed to the other and so forth.  It’s pretty clear that each represents, albeit imperfectly, the Prince’s ideal woman.  Rusalka is the unattainable feminine ideal; flawed in that she cannot engage in fully satisfying sexual activity.  The foreign Princess is sexually satisfying but falls short precisely by not being unattainable.  Some less clear male duality is suggested by the appearance of the Vodnik dressed as the Prince.  It just gets weirder from there with the ballet of nuns, prostitutes, fish, squid and heaven knows what else spilling over into the auditorium while the Prince and Foreign Princess watch from a box and Rusalka and the Vodnik get caught up in the action.  At the conclusion of the act it’s Rusalka not the Princess that he begs for help.

END_OF_DOCUMENT_TOKEN_TO_BE_REPLACED

Toronto based Opera Atelier have announced their 2013/14 season.  The Fall production is a revival of the company’s 2008 Abduction from the Seraglio sung in German with English dialogue (groan).  Casting is Lawrence Wiliford as Belmonte, Ambur Braid as Konstanze, Carla Huhtanen as Blondie, and Adam Fischer as Pedrillo and Gustav Andreassen as Osmin.  A no doubt bare chested Curtis Sullivan will play the non-singing role of Pasha Selim.  It’s an interesting cast especially considering the impact Ambur has been making recently and I’ll more than likely take a look.  END_OF_DOCUMENT_TOKEN_TO_BE_REPLACED

I’m a pretty Regie friendly guy but I confess to being quite bemused by the 2006 Salzburg production of Mozart’s Ascanio in Alba.  Some of the production concept I totally get.  Removing the unaccompanied recits and replacing them with two actors speaking a summary (in German) makes all kinds of sense.  It reduces a sprawling pastorale with minimal plot to something half the length while keeping all the good music.  The wonky android chorus, the hero apparently with severe motor neuron disease and Aceste shunting Silvia about in a wheelbarrow I had more problems with.  The Gumbie chorus seemed particularly odd and the costumes, well see for yourself. 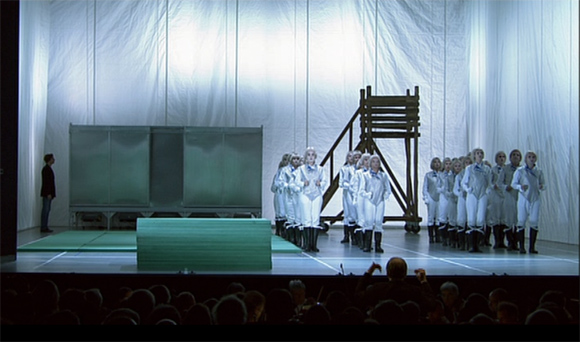 END_OF_DOCUMENT_TOKEN_TO_BE_REPLACED

In 2009 Claus Guth wrapped up his Da Ponte cycle for Salzburg with Cosí fan tutte.  I really like his Le Nozze di Figaro and after seeing this Così I’ll certainly be seeking out the Don Giovanni too. 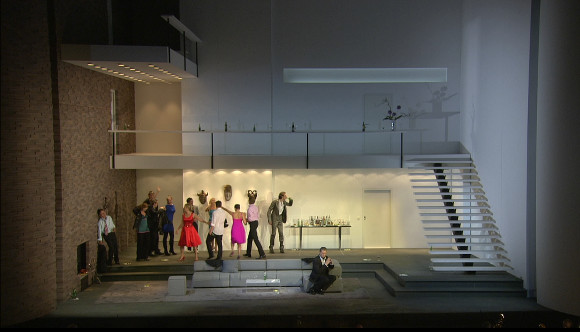 This production was staged in the Haus für Mozart and uses a single set.  It’s the girls’ apartment; a very expensive looking two level loft with a broad staircase that recalls the Figaro.  The setting is contemporary and it opens on the aftermath of what appears to have been a rather good party.  The men are preparing to leave when Don Alfonso issues his challenge.  It’s the edgiest version of the scene I’ve watched with quite an undertone of violence.  This is clearly not going to be a light comedy.  By Una bella serenata the characteristic feathers of the Figaro have appeared.  The edginess continues throughout the first act with many deft touches, especially a power cut staging of Come Scoglio.  When the “Albanians” appear there is only the most perfunctory effort at disguise.  No slapstick moustaches here. END_OF_DOCUMENT_TOKEN_TO_BE_REPLACED