Mirror, Mirror is a fifteen minute film from Essential Opera based on a score and libretto by Anna Pidgorna.  There’s a lot to unpack for a fifteen minute work!  First off, let’s be clear that this is a film and not a video of a performance or production that might have had a live audience.  It’s shot on location in Nova Scotia; on the beach, in the forest etc.  And it’s done very well with excellent editing and high quality in the audio and video recording.

END_OF_DOCUMENT_TOKEN_TO_BE_REPLACED

Also in today’s mailbox, the season announcement from the Talisker Players; a group who specialize in mixing music and the spoken word.

The 2013/14 season kicks off with City of the Mind, a concert about cities, ancient and modern featuring soprano Erin Bardua, mezzo soprano Vicki St. Pierre and baritone Joel Allison.  The show begins in the 15th century, with Les Cris de Paris, a consort piece based on the cries of street vendors in the French capital. Moving ahead a couple of centuries, Tommasso Giordani’s Addio di Londra, for soprano with violin, viola and continuo, is an ode to a famous but unnamed personage upon his departure from London, entreating him to remember the sights of the city in his travels abroad.  The programme also features a rare North American performance of a selection of Wiener lieder and the Venetian Boat Song,  a 19th century salon piece by Jacques Blumenthal, for mezzo soprano, violin and piano. Very popular in its day, it is a reminder of the era of the “grand tour” of Europe.  Moving into the 20thcentury we start in New York City with excerpts from Leonard Bernstein’s iconic On the Town, arranged by Laura Jones for baritone, soprano and string quartet, and finishing in Toronto with two pieces; Andrew Ager’s Ellis Portal, for baritone, mezzo soprano, clarinet and string quartet, about the city at night; and Erik Ross’s Concrete Toronto for soprano and saxophone.

END_OF_DOCUMENT_TOKEN_TO_BE_REPLACED

Last night the Talisker Players and guest artists presented a series of readings and vocal pieces on the theme of winged creatures.  It was a very varied programme with the readings, winningly read by actor R.H. Thomson, ranging from Albert Manguel to Peter Matthiessen.  The readings also provided time for the set-up to be changed between numbers with minimum tedium.

The music was also very varied, ranging from Telemann to John Plant’s Sandpiper of 2011 with the rest being drawn from 20th century works from Pärt, Copland, Hoiby, Gideon and Foss.  The ensemble changed constantly with various combinations of strings, woodwind, piano, continuo and percussion.  END_OF_DOCUMENT_TOKEN_TO_BE_REPLACED

The Toronto opera/recital calendar just keeps on giving.  Late April and May are always a bit crazy with the usual three operas on at the COC but there’s a stack more stuff going on.  The latest additions to my calendar are a new Queen of Puddings Music Theatre commission La Selva de los relojes (The Forest of Clocks) by Canadian composer Chris Paul Harman.  This vocal chamber work setting texts by Lorca will be performed by Krisztina Szabó and an ensemble of 6 instruments as part of the free lunchtime concert series at the Four Seasons Centre at noon on April 30th.  Sadly this will be the last work from Queen of Puddings who are winding up this summer.  Next is Ruth, a new opera by Jeffrey Ryan, which will be workshopped by Tapestry at the Distillery on May 4th. Finally there is a Talisker Players show called On the Wing featuring Erin Bardua and Vicki St. Pierre in a birdsong themed programme.  It’s playing on May 7th and 8th at the Trinity St. Paul’s Centre.

Incidental Music is the title of a new novel by fellow blogger and podcaster Lydia Perovic of Definitely the Opera.  The blurb and the launch promise a book that ranges from Budapest in 1956 to contemporary Toronto with opera and somewhat tortuous relationships along the way.  I haven’t yet had a chance to read past the first 15 pages yet but those first few pages are totally Lydia and that is a very good thing.  I’ll post a proper review when I have finished reading it.

END_OF_DOCUMENT_TOKEN_TO_BE_REPLACED 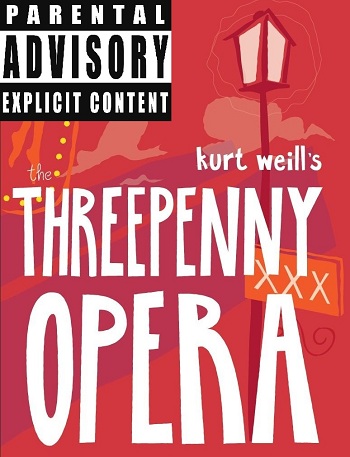 Last night I went to see Essential Opera’s cheap and cheerful production of Brecht and Weill’s The Threepenny Opera.  It was a semi staged production in the relatively small Heliconian Hall.  Semi-staged in this case meant sung in costume from music stands with very basic blocking.  Accompaniment was by Cathy Nosaty on piano and accordion which actually suited the music pretty well.

The singing was good, sometimes very good.  Probably the stand out was Laura McAlpine’s Jenny.  Of all the singers on display she was the one who seemed most immersed in the sound world of the piece and could vary style and technique appropriately.  Erin Bardua’s Lucy Brown was really quite idiomatic too.  The others were more consistently operatic which sounded a bit odd in places but worked surprisingly well in, for example David Roth and Heather Jewson’s rather refined refined and bourgeois Peachums.  Obviously this approach also worked for the character who are usually sung operatically; Macheath, Brown and Polly for example.  The ensembles were all also very effective.