It’s Spring in Toronto. The Canadian Opera Company has three productions in rehearsal and load ins and set building have started once more at the Four Seasons Centre. Here’s my take on what’s coming up.

Offenbach – Tales of Hoffmann April 10th to May 14th 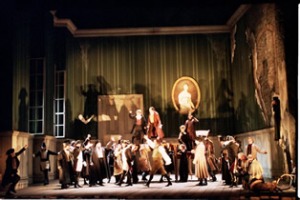 This is a house debut for British director Lee Blakeley who brings his production previously seen at Vlaamse Opera.  The production looks on the face of it fairly conventional but word from the rehearsal studio is that it’s fairly “out there”.  The casting is a typical mix of “A list” talent, local favourites and Ensemble Studio members.  Probably the biggest draw is local boy John Relyea who is playing the four villains.  American tenor Russell Thomas sings the title role.  The four main female roles will be sung by Andriana Chuchman, Erin Wall, Keri Alkema and Lauren Segal; all familiar faces to Toronto audiences.  Johannes Debus conducts. More information.

END_OF_DOCUMENT_TOKEN_TO_BE_REPLACED

The searing intensity of this 1988 Glyndebourne recording of Janáček’s Kat’a Kabanová overcomes a rather indifferent DVD transfer to great effect. 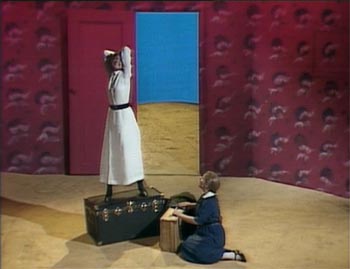 The production by Nikolaus Lehnhoff focuses on the inner emotions, or lack of them, of the principal characters especially Kat’a and the Kabanovicka. This focus is greatly aided by the simple but colourful semi-abstract sets that bring to mind Chagall or Kandinsky in their bold use of colour. The execution of the concept is first class. Nancy Gustavson, in the title role, gives a quite breathtaking portrayal of a mental breakdown, especially intense in the confession scene. She also sings quite superbly. Felicity Palmer as her mother in law is as chilling as one could possibly wish, nowhere more so than in the final scene as she walks away from Kat’a’s body. The Varvara, Louise Winter, the facilitator of Kat’a’s fatal affair, brings some real charm to what would otherwise be pretty unrelentingly grim. 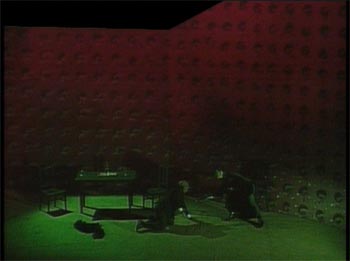 The men have less to do and the only real stand out is bass Donald Adams as Dikoj. His scene with Palmer is oddly compelling in a revolting sort of way. The other men are perfectly adequate but it’s the women who carry the show here. The other real star is the LPO under Andrew Davis. This is a hell of a score and Davis, wonderfully supported by his players, makes the most of it. I just wish the sound quality had been better. 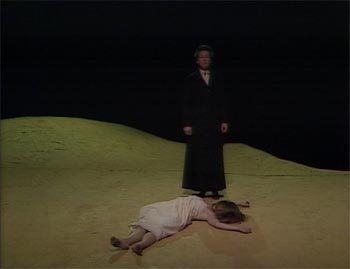 The production for DVD is adequate. Helped by the small stage of the old theatre at Glyndebourne video director Derek Bailey lets us see what is happening and only in Act 3 does he get a bit close up happy. All in all it’s not a bad job for a 1988 TV broadcast. The picture is tolerable. It’s 4:3 with hard English subtitles. As all 100 minutes of the opera are crammed onto one DVD5 it’s perhaps surprising it’s as good as it is. Sound is Dolby 2.0 and again “adequate” is as good as it gets. There are no extras or documentation beyond a chapter listing. The european release on a different label may be a little less Spartan.

Technical reservations aside, this is well worth seeing.

I put Rossini’s comedies in the category of “guilty pleasures”. They are silly, trivial, lack real human emotion and are musically pretty trite but they are frothy and fun and sometimes even funny. 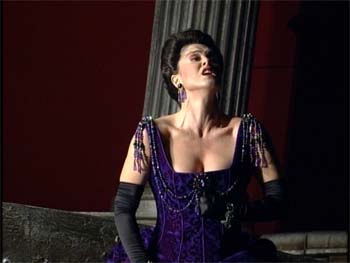 Rossini’s tragedies on the other hand are just that, tragedies. Ermione is no exception. The plot is emotionally beyond credibility, despite being (or perhaps because of) being based on Racine without managing to descend into the unintended humour of, say, Armida. The music is more suited to a comedy and so all that’s left is visual spectacle, vocal virtuosity and a lot of opportunities for the leading lady to chew the scenery. That, ultimately, is probably what it’s about. It was written for Isabella Gilbran. Presumably she coerced Rossini into providing a vehicle for her to display her talents as a tragedienne. Otherwise the whole thing is inexplicable.

The production given at Glyndebourne in 1995 has a lot going for it. Anna Catarina Antonacci sings the title role, the majestic Diana Montague sings Andromache and Andrew Davis is in the pit. There are also four tenors, which is plenty though not quite in the Armida class. 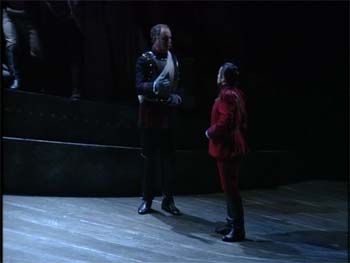 They all seem to be less than about five foot six tall which given that the bass role is sung by the lofty Gwynne Howells looks decidedly odd. Director Graham Vick sets the work in an opera house in the mid 19th century but for reasons obscure everything is tilted at odd angles. It looks like a wedding cake gone badly wrong. Blocking is all very basic, partly at least because Antonacci’s gowns have enough train to seriously inhibit movement. It’s basically park and bark with the odd swoon. 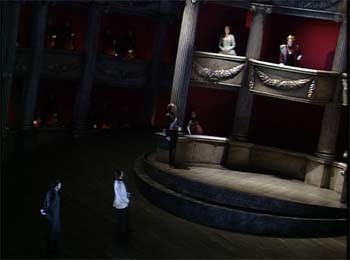 As a musical performance I can’t fault it. Antonacci, Montague, Howells, Jorge Lopez-Yanez (who plays King Pyrrhus) are all near perfect. Antonacci in particular runs through the whole arsenal of Rossinian fireworks with consummate ease. The other roles are never less than competent. Andrew Davis does his level best to breathe some life into the score but there’s really not much he can do about the jolly little tunes that keep popping out of the woodwinds at the least opportune moments.

Humphrey Burton video directs. It was originally filmed for Channel 4 and opens with the obligatory Glyndebourne sheep shots. It is very much a 1995 production for the small screen so lots and lots of close close ups. 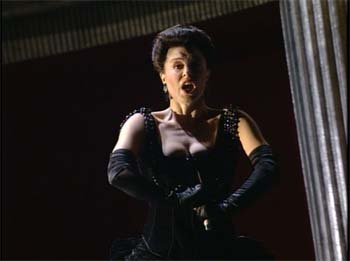 So many of these are of Antonacci’s cleavage that one wonders whether a dedicated boob cam was employed. Given the original motivation for the opera this may be a case of Historically Informed Videography. The disc package is typically basic Kultur label; 4:3 barely DVD standard picture, Dolby 2.0 sound, no extras. There are subtitles in English, French, German, Italian, Spanish and (oddly) Portuguese. The only documentation is a chapter listing.

One for the Rossini completist only.

Last night’s Ariadne auf Naxos at the Four Seasons Centre was a delight. It’s a peculiar opera and clearly a section of the audience hadn’t done their homework and were rather confused. It’s in two parts. In the prologue arrangements are being made for two pieces to be performed at a big party at the home of “The richest man in Vienna”. The first is an opera seria; Ariadne in fact written by a young earnest composer and to be performed by a stereotypically haughty diva and tenor. The second is a buffo piece to be performed by the dancer Zerbinetta and her troop of Harlequins. There is much huffing and puffing by the serious opera crowd, especially the composer, about having to perform in such undignified company but the boss is the boss and money talks. The final indignity is when the Major Domo announces his master’s decision that both pieces must be presented simultaneously. Last night this was played out in modern dress on a set that faithfully, at least as I remember it, recreated the rather drab back stage areas of the Four Seasons Centre. I have no idea how many people got the joke but I thought it was funny. Alice Coote, as the composer, and Richard Stilwell, as his mentor, the music master, were excellent and everyone else contributed as needed to make for a very funny first half. It was almost, but not quite, enough to distract attention from some truly gorgeous orchestral playing by the COC Orchestra under Sir Andrew Davis.

The opera proper is a classical myth based story about Ariadne being abandoned by Theseus and wishing to die on her desert island where she is accompanied only by three nymphs who comment on her condition. Ariadne’s big aria, “Es gibt ein Reich”, is all about longing for solace in death. Adrienne Pieczonka sang gorgeously and was well supported by the three nymphs; Simone Osborne, Teiya Kasahara, Lauren Segal. The orchestral playing just kept hitting the spot. All this was played out in front of a very drab backdrop with holes torn in it through which Zerbinetta and her boys were observing the action. This is where it gets weird again as first the Harlequins appear and try to cheer Ariadne up with a bit of comic singing and dancing. She is unmoved. The boys having failed, Zerbinetta herself appears and explains her views on their shared plight as women and her rather cynical philosophy of love. This happens in a coloratura aria of truly fiendish length and difficulty (“Großmächtige Prinzessin”). Jane Archibald brought it off with aplomb and brought the house down. Then it all gets serious again. Bacchus arrives (raving about having been bewitched by Circe, or not). Bacchus and Ariadne sing at each other heroically and rather at cross purposes until they realise that they have redeemed, transformed or something each other through love. Zerbinetta briefly reappears to remind everyone that “a new God always comes”. Ariadne and Bacchus get even more ecstatic, all sorts of starry things start to appear projected on the stage and backdrops, the orchestra goes nuts, and the curtain falls. It shouldn’t work. It’s Strauss and Hofmannsthal perhaps being too clever for their own good but, miraculously, it does work and the music is fabulous. When the performances are as good as last night it’s all really rather wonderful.

The audience reaction was interesting. A non trivial number of seats were empty after the interval and one couple left rather abruptly half way through the opera proper. Those who stayed were very enthusiastic. Makes me wonder what’s happening with the COC audience. Thoughts on that will form part of a season round up post I think.

Berg’s Lulu is a fascinating piece. The plot is unremittingly bleak including (by implication) child abuse, murder, cholera and prostitution culminating in Lulu’s death at the hands of Jack the Ripper. The music is dense and fascinating. Most of it is written using twelve tone technique with a different tone row for each character. It’s not an easy listen. I watched it on a DVD of a 1996 Glyndebourne production directed by Graham Vick, with Andrew Davis conducting and Christine Schafer, then 30, in the title role.

The set for the entire production is a series of contrarotating circles of floor set around a hole in the stage by which characters can enter and exit. Behind this is a high curving wall with a staircase up it and various doors. This allows Vick to use space to explore the relationships between the characters in some interesting ways.

At the heart of this production is Schafer(*) she has the ideal looks and voice for the part. There are only a handful of singers in the world who can throw off the some of the fiendishly high coloratura work and wear the outfits she wears in this piece. The rest of the cast is stellar and the orchestral playing and conducting is about as lyrical as Berg ever could be. It all adds up to a musically and dramatically satisfying package.

Video direction (by Humphrey Burton) is unfussy and undistracting. The DVD is 4:3 and the only audio option is Dolby Digital 2.0.

Here’s the scene with Lulu and Jack the Ripper as a sampler.

*The more I see of Schafer the more impressed I am. She sings a lot of difficult modern music but she also brings real character to a wide range of traditional lyric soprano roles. I’ve seen her as Sophie in Rosenkavalier, as Gretel in Hansel and Gretel and as Cherubino in Il Nozze di Figaro. She really inhabits the characters she plays. As she does in Lulu.