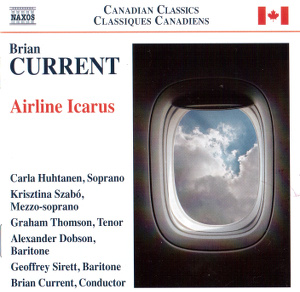 When I saw Brian Current’s Airline Icarus this summer in a staged version by Tim Albery I thoroughly enjoyed it but had this nagging feeling I wasn’t completely getting it.  First time through with the CD I had the same reaction.  It was only when I printed out Anton Piatiogorsky’s libretto and listened with that in front of me that I began to feel I was finally understanding this somewhat enigmatic work.  I realized it’s a structural thing.  The first two parts of the piece are essentially realistic.  It’s a black comedy involving a sort of anti-love triangle between a businessman (Geoff Sirett), a flight attendant (Krisztina Szabó) and a businesswoman (Carla Huhtanen) played out along with the terror of an academic (Graham Thomson) flying, ironically, to Cleveland to deliver a paper on the Fall of Icarus.  It’s inventive and funny but then something happens.  It’s very ambiguous but Current’s notes tell us that it’s inspired by the 12 -15 minutes between KAL007 being hit in the wing by a Soviet missile over Sakhalin in 1983 and its eventual destruction.  The mood changes with a nervy ensemble piece about hubris and technology followed by an ecstatic aria from the pilot (Alexander Dobson) before a deceptive return to “normality” and fade out.  It’s quite disturbing in its lack of resolution.