Being an opera lover would probably be easier if I liked Puccini more, given how much air, DVD and stage time his works get, but I really struggle with him.  I think it’s that concepts like “subtlety”, “elegance”, “verisimilitude” and “cultural sensitivity” completely passed him by.  In an Italian setting his bombast and melodrama are somewhat made up for by the catchy tunes but move him to China or Japan or the United States and my ability to override my reality chip fails me.  Which is a long winded way of saying Turandot is not my favourite opera. 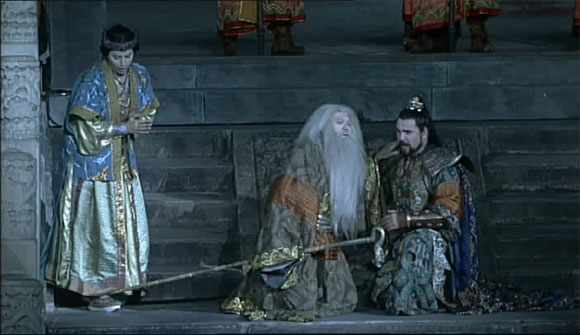 In this recording Zubin Mehta and the musicians of the Maggio Musicale Fiorentino have teamed up with noted film director Zhang Yimou (Raise the Red Lantern etc.).  He’s a fine director but noted more for spectacle than subtlety.  Throw in the Forbidden City and a cast of thousands and it’s pretty clear what one is going to get.  This production has huge set pieces, bright colours, martial arts, incredibly ornate costumes and, of course, Puccini’s big, loud score.  I imagine that seeing it live must have been quite thrilling if a little indigestible.  Unfortunately it’s just the sort of thing that doesn’t translate especially well to DVD even when viewed on a largish screen.  Video directors Hugo and Ruth Käch try hard to balance depth of shot and to show what’s important but there’s just too much going on and a standard definition picture can’t hold the needed detail.  At times they almost give up and resort to cutting in shots of the Great Wall or architectural details.  It’s all a bit of mish-mash and, not being absorbed into it as a live audience might be, it all seems rather superficial. 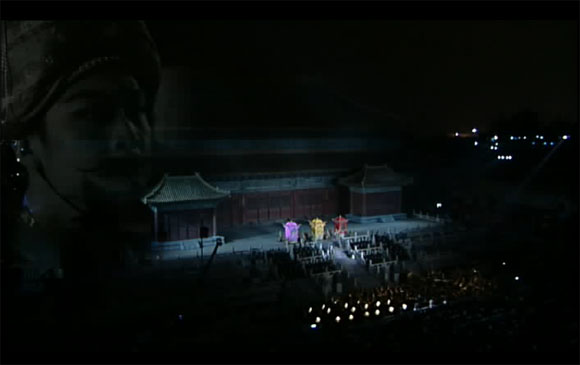 Musically it’s not a bad effort.  Mehta is an efficient conductor and he doesn’t have to worry about balance because the engineers are handling that.  Sergeij Larin is a suitably heroic sounding Calaf, if a bit wooden in the acting department.  Carlo Colombara is an excellent Timur; both lyrical and rock solid.  Barbara Frittoli uses some rather odd stylized gestures but sings sweetly as Liu and is quite affecting.  Less satisfactory to my ears is Giovanna Casolla’s Turandot.  I find her vibrato excessive and her squally tone very hard on the ears.  Mind, I had the same reaction to Guleghina in the Met HD broadcast so maybe it’s the role as much as the singing.  The minor roles are all fine and the huge chorus sounds huge.

The DVD is technically peculiar.  The picture is standard definition 16:9 and it is what it is; which unfortunately isn’t really good enough to do justice to the production.  The sound is the real oddball.  The only option available with the video is barely adequate Dolby 2.0 but there’s a separate LPCM stereo track which is way better but can only be listened to accompanied by a succession of stills.  Go figure!  There are English, French, Italian, German, Chinese and Japanese subtitles and a short “Making of” feature.  The menus aren’t entirely intuitive either.

I’m sure a hardcore Puccini fan would enjoy this more than I did but I doubt it would be anybody’s first choice.

5 thoughts on “Turandot in the Forbidden City”