Last night at Roy Thomson Hall Barbara Hannigan made her North American conducting debut with the TSO.  And, of course, she sang too.  She kicked off with Luigi Nono’s Djamila Boupacha for solo voice.  It’s a short but haunting piece inspired by a woman activist from the Algerian War.  I don’t think I’ve ever heard a solo, unaccompanied, voice in that hall and the effect is eerie.  It’s also a hell of a sing and to navigate it with utter precision is quite some feat.  As the last note died away (precisely on pitch) the violins came in with the opening Haydn’s Symphony no. 49 “La Passione”.  It starts off with an Adagio that’s curiously similar in mood to the Nono piece and Hannigan was conducting without score or baton.  In fact it was more like an interpretive dance than conventional conducting.  She has amazing arms and hands; the arms and hands of a ballerina in fact and as she summoned the strings to a sort of shimmering sound I couldn’t help but reminded of Swan Lake.  Corny perhaps but very real and quite disturbing.  And the orchestra, quite a small subset of the TSO, responded.  This was four movements of really lovely, chamber music like playing. 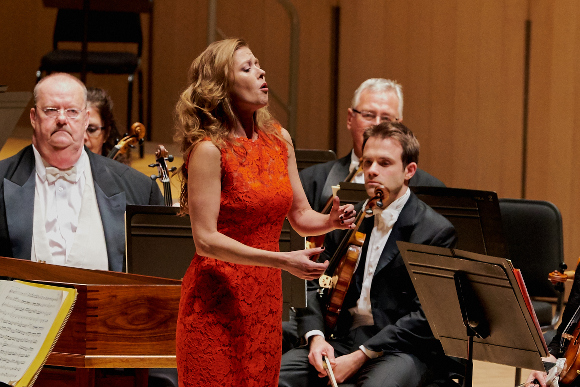