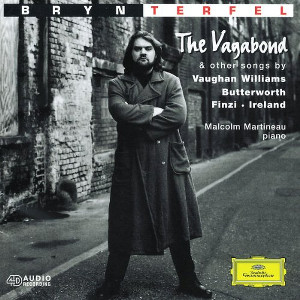 I usually only review CDs on first release but I came across one on the weekend that I need to rave about.  I guess it’s not exactly a secret that I’m a huge fan of early 20th English art song.  So, when I found a CD with most of favourites sung by one of my all time favourites it was pretty much bound to be a hit.  It’s a 20 year old recording by Bryn Terfel and Martin Martineau and it’s called The Vagabond and other songs.  The disc includes Vaughan Williams Songs of Travel, Finzi’s Let Us Garlands Bring, both of Butterworth’s Housman cycles and three settings of John Masefield texts by John Ireland. The young Bryn’s voice is a touch lighter than today but it’s still a brooding dark thing though with delicacy enough for, say, Is my team ploughing?  Martineau is a most skilled accompanist and the recording, made in Henry Wood Hall, is very good indeed.  I can see this getting played a lot!