André Tchaikowsky’s The Merchant of Venice was written in the years leading up to his premature death in 1982 but, despite interest from ENO in the 1980s, it did not get a full performance until David Pountney decided to stage it at the the 2013 Bregenz Festival with Keith Warner directing.  It’s hard to explain the neglect though Pountney ascribes it some degree as the fate of the emigré  (the composer being a Polish Jew domiciled in the UK).  The Merchant of Venice is a really solid piece.  It’s got all the elements; a strong story, a really interesting but not overly intimidating score and really good writing for voice (it really is singable).  It’s the right length at around two and a half hours and it doesn’t call for unreasonable orchestral or vocal forces.  John O’Brien’s libretto even manages to overcome some of the objections to staging Shakespeare’s play.  While one might consider the Shakespeare piece to be antisemitic, O’Brien’s libretto is much more clearly about anti-semitism.  There’s also a clear homoerotic element in the Antonio – Bassanio relationship and perhaps too in Portia – Nerissa. 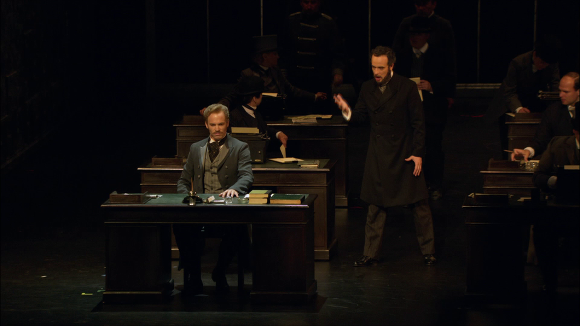 END_OF_DOCUMENT_TOKEN_TO_BE_REPLACED

The second instalment of Patrice Chéreau’s 1980 Bayreuth Ring cycle is set, like Das Rheingold, in a sort of industrial bourgeois late 19th century.  One would almost say steampunk if that were not an anachronism.  Actually the “industrial” side is much less evident than in the earlier work.  There’s a sort of astrolabe/pendulum thing in Valhalla but that’s about it.  Setting aside, the story telling is very straightforward; so much so that it takes a real effort of the imagination to get into a mindset where this production could ever have been considered controversial.  It’s quite literal; Brünnhilde has a helmet and breast and back plates (worn over a rather severe grey dress), Wotan has a spear, Siegmund has a sword.  There’s not an assault rifle or light sabre to be seen.  It is though dramatically effective.

END_OF_DOCUMENT_TOKEN_TO_BE_REPLACED 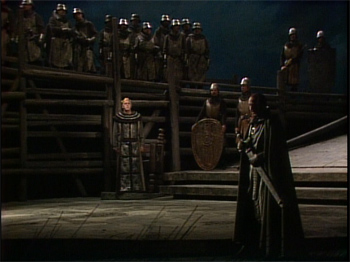 Surprisingly perhaps I started out liking this 1986 recording of Lohengrin from the Metropolitan Opera quite a lot.  It’s a very traditional, literal and 70s/80s dark production but the orchestra and chorus are great, the P-regie seems pretty well thought out and the singing in the opening scenes is great.  Unfortunately it really rather goes downhill once Elsa, Lohengrin and Ortrud make their appearances.